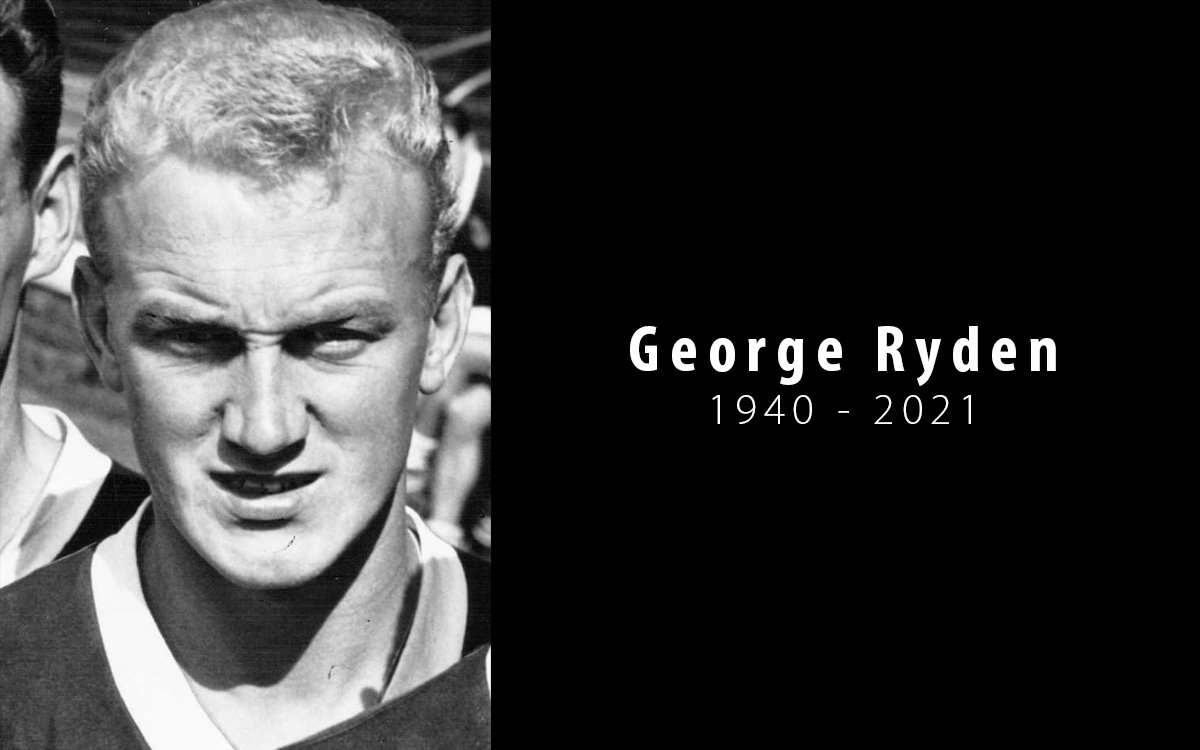 Everyone at Dundee Football Club was saddened to learn of the death of former player George Ryden, who passed away earlier this month, aged 81. Centre-half George played for The Dee during the club’s golden era of the early sixties, making 87 appearances over four seasons, which included playing in the 1964 Scottish Cup Final against Rangers.

Born in Dumbarton in 1940, George’s football career started at local Junior club Duntocher Hibs before signing for Bob Shankly’s Dark Blues. This was the side that were champions of Scotland in 1961/62 but when Scottish Player of the Year Ian Ure was injured for the visit of Kilmarnock six months later, on October 20th, George came into the side for his debut in a 1-0 win.

The tall blonde defender would go on to make 10 appearances in the season in which Dundee reached the European Champions Cup semi-final and in his next appearance on December 1st, he scored the first of his two goals for the club in a 10-2 win over Queen of the South at Dens, in which Alan Gilzean scored an astonishing seven goals.

A year after his Dark Blue debut George and teammate Hugh Robertson would famously be photographed with The Beatles backstage in the Caird Hall when the ‘Fab Four’ performed in the city on October 7th 1963. Ryden is sitting between Paul McCartney and Robertson, and Shug, who is holding George Harrison’s guitar in the photograph, shared the same digs with him at Mrs Garvie’s when he arrived in the city.

Indeed, in Craig Brown’s autobiography, he describes himself as part of the ‘Garvie Five’ alongside George, Robertson, Ian Ure and Tommy Mackle and the quintet were notorious for being late to training as they all shared a wee car that often refused to start.

By the time of that Beatles concert George had established himself in the first team after the departure of Ian Ure to Arsenal and would make 51 appearances in the 1963/64 season, culminating in the Scottish Cup Final against Rangers at Hampden.

This was a classic watched by 120,982 spectators on the first occasion that Dundee and Rangers had met each other in a Scottish Cup Final. Few would dispute that the Dundee side of the early sixties, of which George was an integral part, was the finest in the club’s history. This was the Dark Blue side of Alex Hamilton, Bobby Cox, Andy Penman, Alan Cousin and Alan Gilzean while the Light Blues of Rangers had the likes of Jim Baxter, John Greig, Willie Henderson, Jimmy Millar and Davie Wilson in their ranks.

En route to Hampden, George played in in all six ties, as The Dee disposed of Forres Mechanics, Brechin City, Forfar Athletic, Motherwell (after a replay) and Kilmarnock, scoring no fewer than 30 goals in the process.

Scottish Football Association regulations of the day necessitated that both sides were required to change strips due to a colour clash meaning Dundee wore an all-white kit, while Rangers fielded their blue-and-white ‘butcher’s stripe’ outfit.

There were no football agents back then and commercialism was still in its infancy, yet the Dark Blues, under Bob Shankly, sought to gain some measure of financial remuneration when a Grampian Television film crew turned up to cover a training session. The broadcast crew refused to stump up, as did the written press, when the Dundee players demanded £1.18s per man to have their photographs published in the press.

It was a game that everyone was looking forward to and the teams lined up as follows:

The game certainly didn’t disappoint, and it was a superb confrontation between Scotland’s two finest footballing sides – a game with class and skill with Rangers on top for most of a game played at a hectic pace only to be denied time and time again by the defiant goalkeeping and uncanny anticipation of Bert Slater in the Dundee goal.

However it took until the 71st minute for the deadlock to be broken when Rangers’ centre-forward Jimmy Millar outjumped Ryden to head a Willie Henderson corner towards goal, with Slater being distracted as Brand moved across his line of vision without making contact with the ball.

Dundee’s response was instantaneous; from the restart in fact, when a through ball from Alex Stuart found Kenny Cameron just inside the box having eluded centre-half Ronnie McKinnon. As the ball dropped over his shoulder, Kenny took a touch with his right foot and before the ball hit the deck, he spun and hit a superb volley with his left which flew high over the Rangers keeper and into the top right corner of the net from 12 yards. It was a sumptuous goal; one of the greatest ever scored at the National Stadium.

A replay the following Wednesday looked inevitable until the tie was won and lost inside the final minute. A clever Baxter free kick found Henderson on the left, whose quick turn and cross found Millar. His floated header back across goal towards the far post deceived not just Slater but his defenders and almost every spectator inside Hampden as the ball drifted into the corner of the net.

The Dens’ side raced up field in a desperate attempt to retrieve the situation for a second time only to be caught on the break in a classic counterattack. Henderson released Davie Wilson and the winger’s drive was parried by Slater only for Brand to swoop on the ball on the goal line and squeeze it into the net via the far post.

Disappointment for George as he had to be content with a runners-up medal with the trophy heading to Govan but with Rangers also winning the Scottish League championship, the Dark Blues had the consolation of being entered into the 1964/65 European Cup Winners’ Cup.

After receiving a bye in the first round, Dundee were drawn against the Spanish Cup holders Real Zaragoza in the second and were up against a side of real quality. Like the Dark Blues it may only have been Zaragoza’s second ever European campaign but in their first, in the previous year’s Inter-Cities Fairs Cup they ended up as champions beating fellow Spaniards Valencia 2-1 in the final.

When they headed to Dens therefore for the first leg on November 18th, 1964, they were not only the current holders of the Copa del Generalísimo (the name given to the Copa Del Rey during General Franco’s rule) and the Fairs Cup, they also had six internationalists in their squad and had beaten Maltese side Valletta 8-1 on aggregate in the first round.

Ryden missed the 2-2 first leg draw at Dens but was back in the side for the return in Spain three weeks later. The second leg took place in the Estadio de La Romareda in front of 23,000 on Wednesday December 8th and The Dee got off to a great start when George’s mate Hugh Robertson gave them the lead after 18 minutes.

However just as they had done as Dens, Los Blanquillos hit Dundee with two lightning quick goals to give them an aggregate lead. Two goals in two minutes shortly before the interval from Zaragoza’ international outside-left, Carlos Laperta, k.o.’d a gallant Dundee bid for Cup Winners’ Cup glory.

The left winger’s goals came in the 40th and 42nd minutes to cancel out Robertson’s opener and there were enough to send the Spanish side through 4-3 on aggregate.

Tommy Gallacher in The Courier reported that “Dundee’s performance in holding this classy Zaragoza side to a one-goal margin defeat was simply terrific.”

The Dark Blues had played the whole of the second half with Bobby Cox a helpless passenger on the left-wing; hirpling with a heavily strapped up thigh as Doug Houston took over at left-back.

The entire game was a tale of relentless Zaragoza pressure against a stone-walling Dundee defence at which George was the heart. Dundee had clearly pinned their hopes on keeping the Spaniards out and depending on breakaway tactics to their goal and it very nearly worked.

George began to slip out of favour that season, making just 20 appearances and after just six outings in the 1965/66 season, he was on his way to Perth.  There he would spend three seasons with St Johnstone before a brief spell with Stirling Albion in the 1969/70 season brought down the curtain on his playing career. He would later go on to manage Blairgowrie and Osbourne Juniors while also coaching primary school teams.

George was one of five brothers and one of three who made their mark in the senior game. Sadly, all three, John who captained Spurs in the 1950s, Hugh, who played for Chester, Bristol Rovers and Halifax and George all contracted Alzheimer’s disease. George suffered for over a decade with the neurodegenerative disease and was cared for by his wife Lina.

George was always a welcome guest at club events over the years and as part of the club’s golden era will be fondly remembered.

Our thoughts are with George’s family and friends at this sad time.