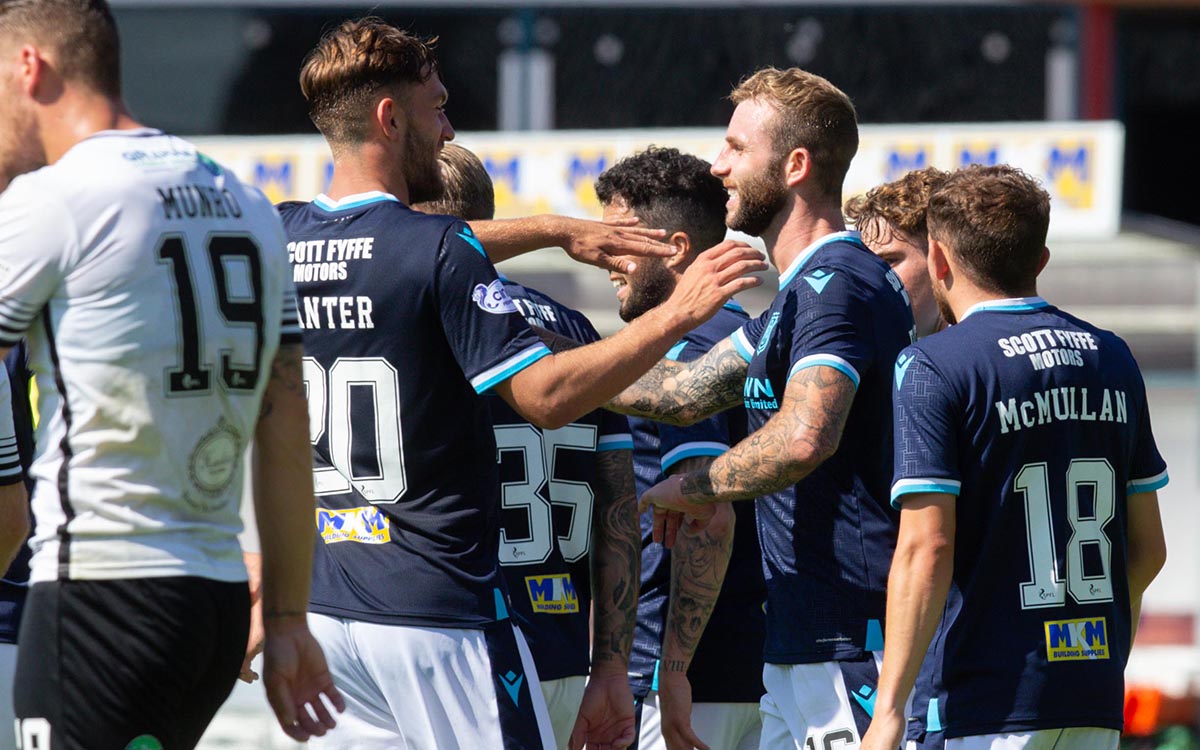 James McPake will lead Dundee back into the top flight this weekend as his side takes on St. Mirren in the opening match of the cinch Premiership.

The manager is looking forward to the return to the top flight but is under no illusions of how difficult the task will be.

He spoke to the broadcast media ahead of the match, “We need to be conscious of the fact that we are in against better opposition. That’s no disrespect to the Championship. There are some good teams and you get some very tough games in that league but the Premiership is a step up. It’s a step we feel we are ready for and we proved last season against Premiership opposition, that we can compete.”

“It’s ok in cup ties or in play-offs but we have to prove it week in week out but it’s a challenge we are looking forward to and we can’t wait.”

“Taking a squad up to the Premiership in front of these fans brings it’s own pressures because they demand that you win games. Whether it’s in the Premiership or the Championship they want to see a team that will win games, that will excite them and that will fight for the jersey and that is what we are going to promise them.”

“There is quality in there. In my time I don’t feel any of the squad has been as strong as this one but the Premiership is stronger as a whole so we need to be conscious of that and make sure we are ready and prepared for every challenge that lies ahead because there are going to be plenty.”

“It’s the league we want to be in. When we got the job it’s what we wanted to do. Credit to the players for what they have done. It’s not been easy by all means.”

“The first season gets stopped when we are starting to take off a bit then last season going all the way to the play-off final and winning it in convincing fashion but that is last season and now we are in the place we want to be and a place this club should be.”

The 5 players who were identified as close contacts to a positive covid case will be available for Saturday.

Alex Jakubiak and Cammy Kerr look set to miss out through injury.

Dundee take on St Mirren in our Premiership opener for 20/21 and it will be the 208th meeting between both sides in the league.

It’s a fairly narrow lead we have over the Paisley Buddies. In 207 matches, Dundee have been the victors 85 times, been held to a draw on 43 occasions and tasted defeat in 79 of those matches.

Our memory match goes back to April 1997 with both teams pushing for a play-off spot in the old First Division. Iain Anderson and Gary Mckeown scored both of Dundee’s goals in a 2-0 win for the Dee – our first victory in six matches.

Hugh Robertson showed incredible bravery to play in this match as his brother Gavin’s funeral was held the day before. The amateur footballer sadly passed away following a clash of heads during a game.

John McCormack Said to the press afterwards that he thought it was Robertson’s “best performance of the season,” describing his him as “immense” on the pitch.

Live streaming of this Saturday’s home game against St. Mirren will be available.

Season ticket holders (Adult/O65/Disabled/Student/U18) are reminded they can now log in to our DeeTV site where they will be able to view.

To login, for the Username – Season Ticket holders should use their name-surname-client reference number – i.e. John-Smith-1234567

The password is the client reference number on their season ticket: i.e. 1234567

For those looking to purchase a pay per view pass of Saturday’s match this is available now at the cost of £12.50.

You must register a username and password, then can purchase the event.

Please ensure that you also bookmark this site as you will return to watch the match on this platform.

The link to the PPV site is – https://ppv.dundeefc.co.uk/register

If you require any technical support or help logging in, please contact [email protected]