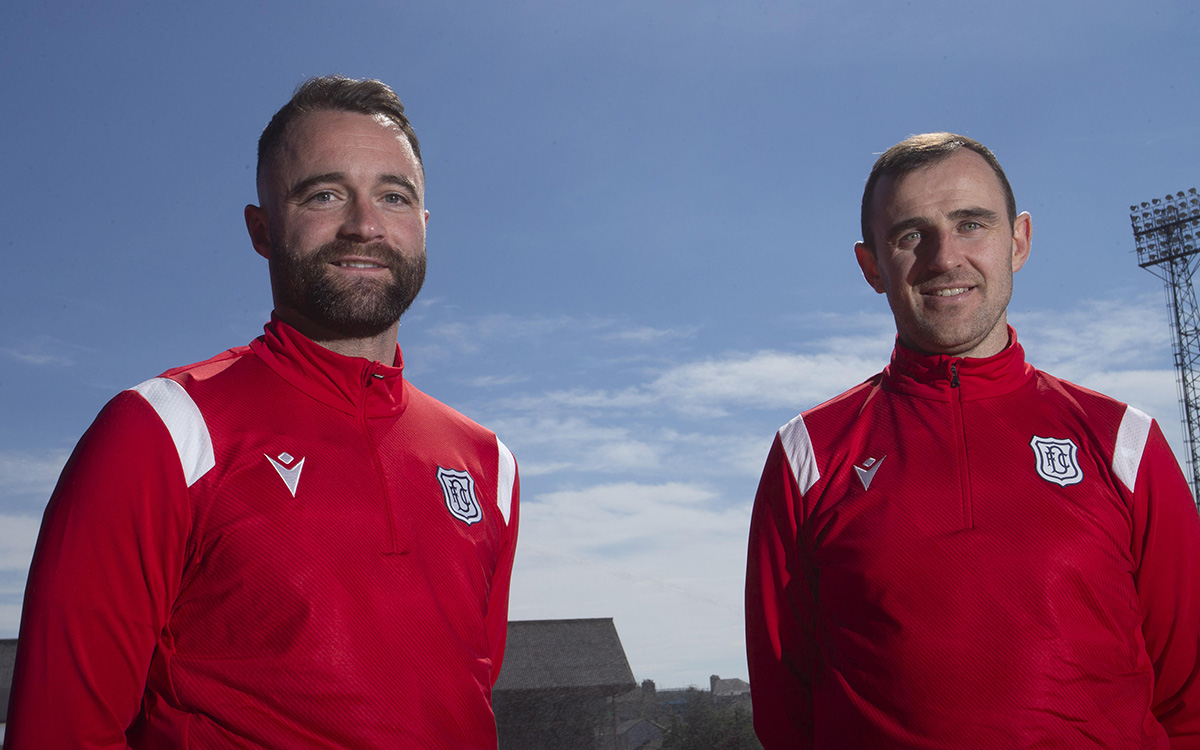 Dundee Football Club are delighted to announce that manager James McPake and assistant manager Dave Mackay have committed to the club by signing new contracts following our promotion back to the Premiership.

The management team have led the club to promotion through the play-offs with convincing victories over Raith Rovers and Kilmarnock after guiding the team to a 2nd place finish in the Championship.

James was appointed first team manager in 2019 after spending five years at the club as a player then Under 18s manager.

One of his first appointments in his coaching staff was Dave as first team coach. He then became assistant manager last summer.

James and Dave have signed new rolling contracts with the club.

James said after signing his new deal, “I’m delighted, first and foremost to be back in the Premiership, it has been a collective effort but we are obviously delighted to have our futures sorted as well.”

“Delighted it’s all been agreed and I think it’s just another part of what we are all trying to do. I’m delighted the club have committed and myself and Dave have committed.”

“It’s good to sign a new contract with the club but the hard work has already begun as we need to now become a competitive Premiership side.”

“There have been bumps in the road and we knew there would be but we kept working and believed in the work. We know the players believed in the work and that showed over the play-offs. We need to continue to get better and become a sustained Premiership club. It’s our job now to build a squad and we know we’ll have to work even harder to progress in the top flight.”

On assistant Dave, James was full of praise, he continued, “His role is probably more important than anyone can imagine apart from those that are in the club day in day out.”

“Everybody at the club knows how hard he works and how much of an input he has. To have him at my side is pivotal to any success. Dave has been a huge part of any success we have had, the players know that and the staff certainly know that. Most of all it’s me that knows that.”

“He is more than an assistant, I’ve known him for 16 years, he is a good person first and foremost and has a great football brain. He’s played as big a part as anybody in getting the club promoted.”

Managing Director John Nelms said, “When we chose James as manager back in 2019 it was the work that we saw him put in place with the Under 18s and Reserve teams that convinced us he was ready to make the step up.”

“The last two years have shown that he could transfer those skills into a first team environment and get results. This has been particularly impressive over the last year with the backdrop of a global pandemic and the challenges that came with it.”

“We are delighted to commit our trust and backing in James and Dave, who as a team, have helped restored pride in the club and also returned us to the Premiership.”

“It’s been a collective effort with James and Dave at the forefront, and we are excited to see them lead us back into the top division next season and progress from there.”