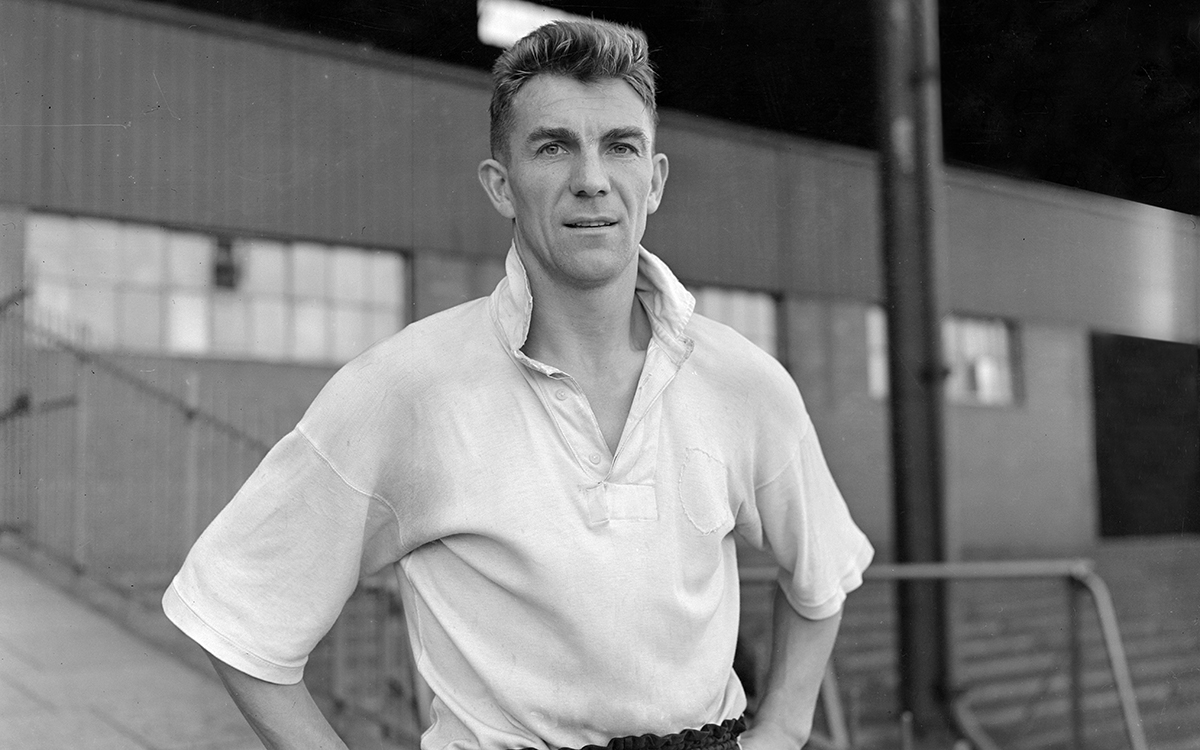 Everyone at the Kilmac Stadium was devastated to learn of the passing of Dundee legend Doug Cowie who died peacefully in Ninewells at the age of 95.

There are those who would argue that Doug Cowie is the greatest Dee of all time, and they certainly have a case. Cowie is the player with the most appearances in a Dundee shirt, is the only Dundee player to have played in two World Cups, won two League Cup winners’ medals, was runner-up in the League Championship and Scottish Cup, won 20 full caps for Scotland, five League caps and one B international cap and is the club’s longest serving player. His sixteen seasons in Dark Blue were to prove to be among the most successful periods in the club’s history and he played alongside some of the greatest names Dundee has ever witnessed.

Cowie arrived at Dens Park in 1945 when the men of Dundee were returning from war with a craving for some return to normality centred on sport and the masses were returning to Dens Park in search of inspiration and solace to ease their hurt. Perhaps a form of escapism, they found new Dundee manager George Anderson was in the process of building a great team and he looked towards an apprentice riveter working in the John Lewis shipyard in Aberdeen to be one of his heroes.

Cowie was within hours of signing for his local side Aberdeen but Anderson was prepared to get his man and after a quick discussion with Doug’s father who was working across the road, the young centre-half signed for Dundee from his Junior club Aberdeen St. Clements.

Doug played 446 competitive games for Dundee, a club record, but incredibly it could have been so much more. At the age of nineteen, he made his competitive debut on 23rd February 1946 in Dundee’s first ever League Cup match at Stirling Albion, but it was his only appearance of the season. In the following year Doug played just three times despite featuring prominently in a pre-season tour of West Germany, Austria and Italy and one wonders just how many appearances he could have chalked up!

The highlight of his career came when Dundee won back-to-back League Cups against Rangers in 1951 and Kilmarnock in 1952 but he missed out on a treble when Dundee lost the 1952 Scottish Cup Final which was sandwiched between the League Cup triumphs. Doug was also part of the Dundee side which finished runners-up in the 1948/49 Scottish League championship after they lost on the final day at Falkirk to hand the title to Rangers by one point.

He started his career at centre-half but always preferred to play left-half and became part of the famous half-back line of Tommy Gallagher, Doug Cowie and Alfie Boyd. Playing in either position made no difference to Doug as his skill and elegance were always on show and many Dundee players of the Forties and Fifties often quoted Doug as the best player they played alongside.

Amongst those was the legendary Billy Steel who signed for Dundee in September 1950 and who was known for putting his team mates on the sharp end of his tongue, but for Cowie he reserved his greatest compliment by stating that the Aberdonian could “play a wee bit.’”

In 1953 Doug made his international debut alongside Steel against England at Wembley and the 2-2 draw was the first of 20 caps which make him the second most capped player in the club’s history.

In 1954 Doug became the first Dundee player to play at a World Cup when he played in two games in the Swiss finals against Austria (0-1) and Uruguay (0-7) and four years later in Sweden played in another two matches against Yugoslavia (1-1) and Paraguay (2-3) which turned out to be his last game for Scotland.

However, on the eve of Dundee’s greatest triumph, in the summer of 1961, Shankly decided to free the thirty-four-year-old Cowie, citing age as the reason why, but just a few weeks later, Doug was disappointed to see Shankly sign Gordon Smith, who was three years his senior. When Dundee went on to lift the League flag just 12 months later, it meant that Cowie was denied a league winners medal for a second time and despite that great triumph at Muirton, there were many who thought that Doug had been released just a little too early.

Near the end of his playing days in 1961 Doug still lived in a Dundee tenement which is changed days indeed from now. It should therefore be remembered that football then was a working man’s sport and they were a different breed of player in those days. No agents, no fancy hair styles, no perms or after shave, no fancy cars or lucrative wages. Some came from the shipyards or coal mines to play for their professional sides and Doug Cowie was one of those gems. He was amongst a generation who played with a pride in their team that would put most modern players to shame when the elements rarely caused a match to be cancelled or anything other than a serious injury caused them to miss a game. They played with boots that covered their ankles, kicking and heading a ball that grew heavy if it rained, with a lace that hurt the head if by chance it met the napper straight on.

Always a gentleman, Doug was honoured by the Club when they named one of their original hospitality lounges at Dens as the Doug Cowie Lounge. In his book Dundee Greats, author Jim Hendry described Cowie as a player with ‘the touch of an angel’ and this angel was deservedly inducted into the inaugural Dundee F.C. Hall of Fame with a legends award in 2009. There is no doubt he deserves his place amongst the first of the elite to be honoured by Dundee in this way.

On his last visit to Dens to reopen the Doug Cowie Lounge in 2014, Doug took the opportunity to look round the stadium which he described as “beautiful” in the foreword he wrote for Dundee Hampden Heroes book the previous year. As he cut the ribbon he simply stated that he wished that he could still have put his boots on for it for League Cup match that was about to take place and there was not a single Dee who would disagree with that statement.

The thoughts of everyone at Dundee Football Club are with Doug’s family and family at this very sad time.