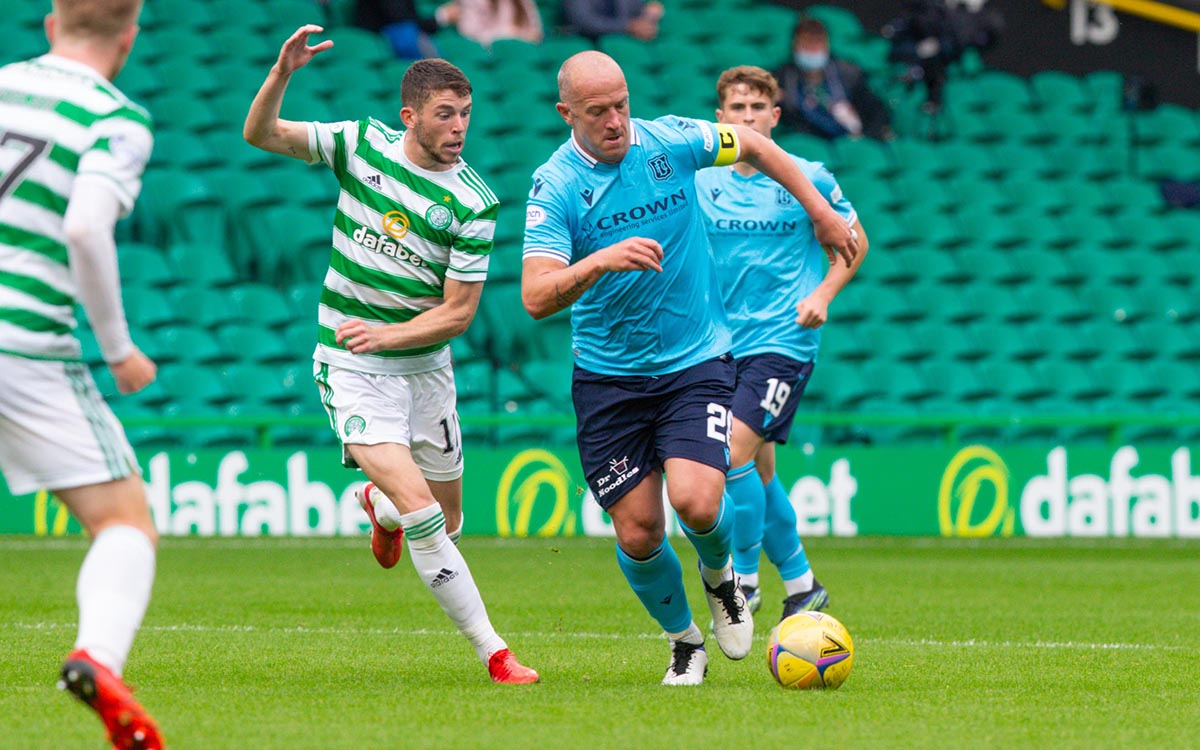 We are back in home cinch Premiership action this Sunday as we take on Celtic live on Sky Sports, kick-off 12noon.

Celtic come into the match on the back of a Europa League win away to Ferencvaros on Thursday night. However, last time out in the league they were held to a 0-0 draw with Livingston despite being awarded a late penalty which was saved.

James McPake’s side will be looking to build on a 1-0 win in Paisley last weekend. Max Anderson’s first-half strike paired with an impressive performance gave Dundee all three points.

The side’s met earlier this season at Celtic Park with the hosts winning 6-0 on that occassion.

Cillian Sheridan and Alex Jakubiak remain out injured. Jordan McGhee will be assessed ahead of the match.

It’s the 240th league game against Celtic and our 120th at home against the Glasgow club this Sunday.

Our record at Dens consists of 63 defeats, 25 draws, and 32 victories for the Dark Blues while our overall record in the league is 147 defeats to 43 Dundee wins.

This fixture hasn’t been too kind to Dundee recently and our current run of 7 league games without a goal against them is an unwanted club record. If we add our League Cup Quarter Final tie from 2017 into the equation, that record stretches to 8 games.

Our biggest win over Celtic took place in 1953 when Dundee stuck 4 past them. Bobby Flavell, Jimmy Toner, and a double from Albert Henderson down the deed for the Dark Blues.

Onto personal records against Celtic in the league, Doug Cowie sits top of the appearance list with 24. Bobby Glennie sits second, also with 24 appearances.

On the goalscoring charts, Sandy MacFarlane claims that no.1 spot with 6 goals. A position he has held since his last goal against Celtic way back in September 1911.

Our memory match goes back to our last victory against Celtic at Dens Park, all the way back to 1988.

Tommy Coyne scored his first goal of the season after a dry patch of 7 games without finding the back of the net and set us on our way.

The manager’s notes were of course from Dave Smith, who took it upon himself to start answering fans letters that had been sent in.

Tickets are on sale now for Sunday’s cinch Premiership match with Celtic at the Kilmac Stadium.

This match has been chosen as a ‘Give a friend a ticket’ match which allows Season Tickets Holders (Adult, senior, disabled, and student) to exchange voucher 29 from their books for a ticket to this fixture.

The voucher exchange must be done in-store at the Ticket Office inside Dundee Direct. You must bring your full season ticket book when exchanging the voucher.

The ticket office is open from 10am till kick off on matchday.

We will have full updates on our Twitter feed during the match.

The full match replay, highlights, and post-match interviews will be made available on DeeTV on Sunday evening.