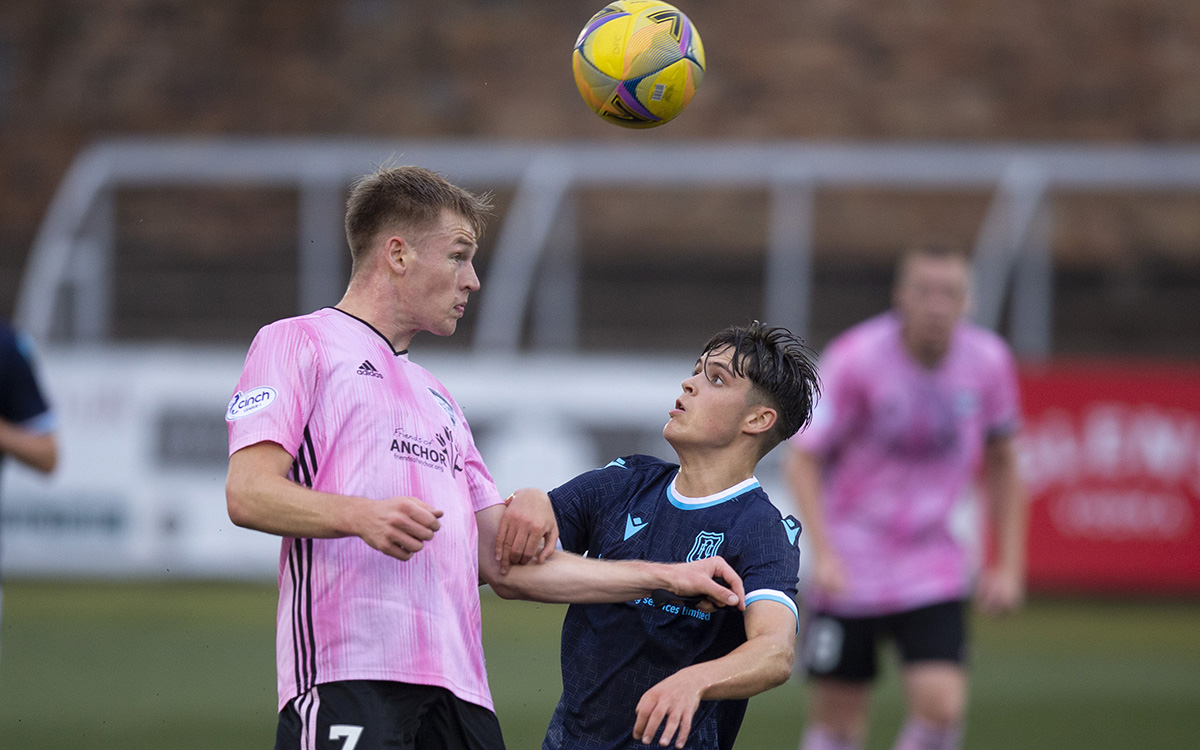 Dundee ‘B’ were knocked out of the SPFL Trust Trophy in a narrow defeat to League One Peterhead at Station Park.

Liam Fontaine and Cammy Kerr took charge of the young Dundee side who put in a fine performance and despite taking the lead could not find a passage into the next round of the cup.

Corey Panter and Ian Lawlor were named as the two overaged players permitted in the tournament for ‘B’ teams and there was plenty of experience in the young starting eleven with Max Anderson and Finlay Robertson in midfield.

Danny Strachan, Josh Mulligan and Lyall Cameron lined up against their loan club in line with competition rules and there was also Ewan Murray, Jack Wilkie and Cammy Blacklock who have all featured for the first team in either competitive action or pre-season friendlies.

The visitor called Lawlor into action right away when in the first minute he was forced to push a Hamish Ritchie effort over the bar while at full stretch.

Peterhead came close again when Niah Payne flashed a shot across the face of goal and ex Dee Derek Lyle was inches away from turning it in at the back post.

Dundee came into the match more and good passages of play saw first Cameron find Robertson for a shot which was held by the Peterhead number 1 then a reversal as Robertson slipped the ball to Cameron and he forced Lenny Wilson to tip over the bar.

The attacking pressure would be made to count when Dundee took the lead. Cameron’s corner was met at the front post by Panter who headed on and Callum Lamb turned home from infront of goal.

The lead however was short lived as Peterhead hit back immediately. The ball fell to Payne in the box and he drilled it through bodies into the net.

Dundee then had a big chance to go regain the lead right away. Cameron played in Blacklock but a double save from Wilson denied the young Dee.

There was a strong start to the second period from Dundee with some lovely stuff being played in the final third. Mulligan and Cameron both tested Wilson after some excellent one touch build up play.

With 20 minutes remaining and the game evenly poised it was the visitors who took the lead. Payne intercepted a pass and carried the ball forward before smashing ball into top corner with the aide of a deflection.

Dundee continued to probed but couldn’t find a way through but with almost the last kick of the ball it looked like they might have forced penalties. A corner was headed down and dropped to substitute Ewan White but his effort flew over, clipping the top of the bar.

It was a disappointing result for the young Dee side as the performance deserved more in the end. They might not have progressed to the next round but they can all hold their heads high after running an experienced side so close.