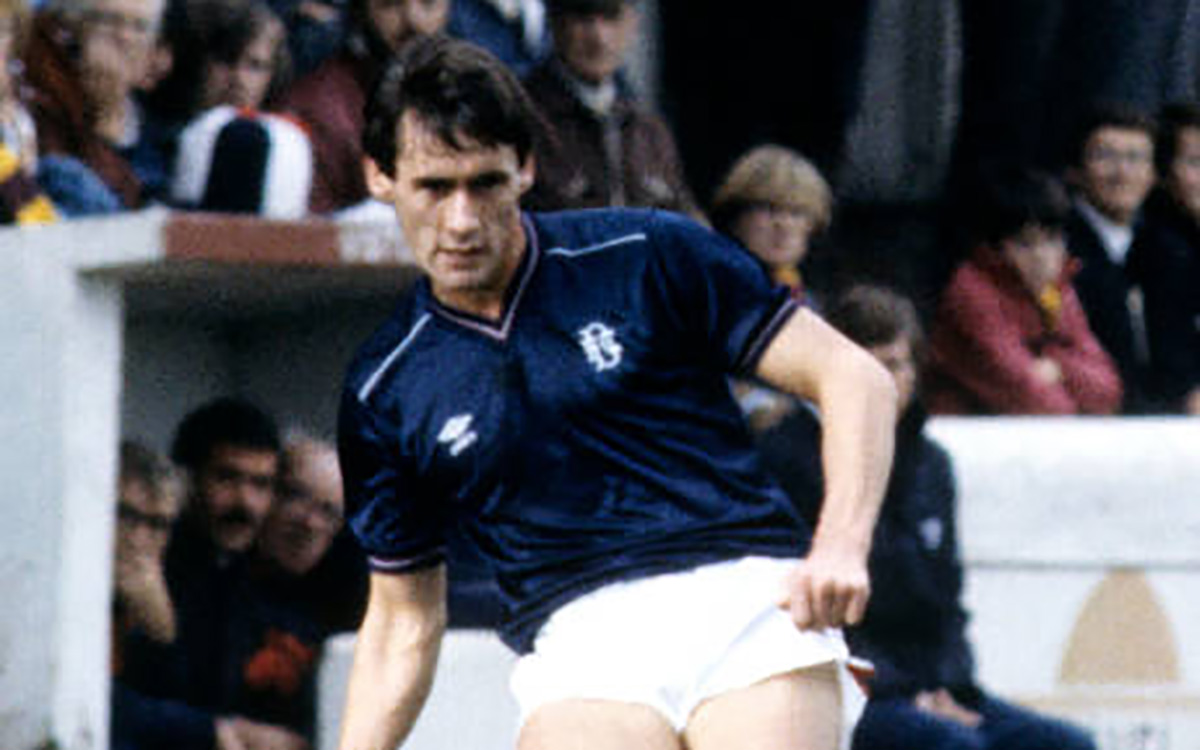 Everyone at Dundee Football Club were saddened to learn of the death of former player Andy Geddes who passed away aged 62 after a decade long battle with cancer.

Geddes joined Dundee in November 1980 and spent four years at Dens Park, playing in a national cup final as well as being part of a promotion winning side in his debut season.

A native of Paisley, Geddes was one of twelve Scots Jock Wallace brought to Leicester City in 1979 and a year later he left Filbert Street to sign for Donald McKay at Dundee.

The winger made his Dark Blue debut on November 22nd, 1980, in a 5-1 home win over Stirling Albion in the First Division and capped it off with an assist for Eric Sinclair’s goal.

The following week he played in a 2-1 win at Dumbarton and with two victories in his first two games, he then started the next game in the historic Bell’s League Cup Final against Dundee United at Dens on December 6th, in favour of the popular Jimmy Murphy.

On a disappointing afternoon, Andy had to be content with a runners-up medal after a 3-0 defeat but five months later, another runners-up medal meant promotion back to the Premier Division as The Dee finished second behind Hibernian in the Scottish League First Division.

It was an excellent achievement for the club, who had been bottom of the table in October and Andy more than played his part with seven goals in 19 appearances. His first strike for the club came the week after the League Cup Final in a 2-0 win over East Stirlingshire in Falkirk and crucial doubles against Raith and Dunfermline in March and the winner in a 1-0 victory at home to Clydebank in the third last game did much to help Dundee win promotion back to the top flight at the first attempt.

Andy missed Dundee’s return to the Premier Division as he was injured for the entire 1981/82 season, and he ended up having three operations on a troublesome knee; two cartilage and one exploratory.

He made just two League Cup appearances in season 1982/83 and therefore had to wait until August 1983 until his first top flight appearance for The Dee away at Aberdeen. Andy scored his first Premier Division goal in a 2-0 win at St Johnstone in October and opened the scoring at Ibrox on December 17th before Rangers went on to win 2-1.

Two weeks later, on Hogmanay, Andy made his last Dark Blue appearance at Pittodrie as in the new year moved to South Africa and joined Wits University FC and then Kaizer Chiefs in Johannesburg where he won the National Professional Soccer League (South African 1st tier), the League Cup and the MTN Cup, as well as earn the nickname ‘Mad Dog’.

At Dundee he totalled nine goals in 37 appearances and as well as being known for his good sense of humour, he will be remembered most at Dens for his contribution to the successful 1980/81 promotion campaign.

The thoughts of everyone at the Kilmac Stadium and with Andy’s family and friends at this sad time.