“We want to go there and get three points” 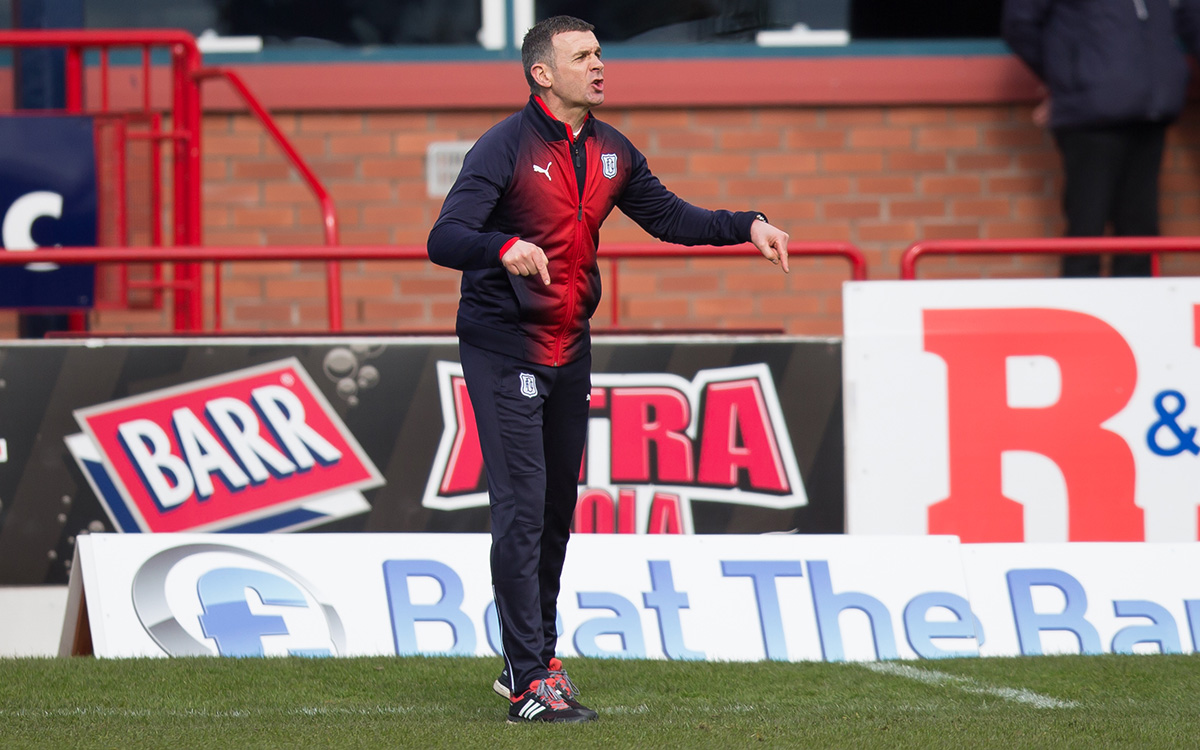 Dundee return to Ladbrokes Premiership action this Saturday following the international break and face St. Mirren at The Simple Digital Arena. Manager Jim McIntyre spoke about the magnitude of the match between the bottom two clubs, “It’s obviously a massive game for both clubs and it’s a chance for us to get a few points ahead but it’s also a chance for them to jump above us so it doesn’t get much bigger but nothing will be decided after this game. There is still seven more really important games still to go. It’s one we want to go there and get three points”

Both side will have to play again after this weekend and the manager picked out these head to head matches has having the added significance, “I’ve got a group of players who I think know the importance of the game. The head to heads are going to be very important. We will have two with St. Mirren, one Saturday and one post split, and one against Hamilton. Those games will be crucial, taking points off each other at this stage of the season with only eight games left is going to be very important for your aspirations of trying to get that third bottom spot. I don’t think it will decide anything, important as it is, I still think it will go to the wire.”

Asked if St. Mirren will be coming into the match with heads down after last night’s defeat to St. Johnstone, Jim said, “I don’t think so cause I think they had enough of the game and it’s well documented they missed a penalty, these are big moments, especially at such an early stage of the game. I didn’t think there was much between the teams, you can see that St. Mirren are playing with more confidence as their recent results suggest. They had a couple of really good away draws before they lost to Kilmarnock and a home victory against Livingston. A bit like ourselves, it’s been a bit up and down but it’s just about how you bounce back.”

“We just need to look at ourselves, we have been good on the road against some of the teams so we want to try continue that on and for us it’s about making sure we try and win the game.”

Defender Andrew Davies has yet to feature for the club in a competitive match following his signing in January and Jim told the press of the massive blow that he will miss the rest of the campaign having re-broken his metatarsal, “Andrew Davies has re-broken his metatarsal in training. We have been waiting on getting that reinvestigated. He was back to see the specialist last week, we just thought he had felt a bit of discomfort but it turns out after a CT scan that he has re-broken it and will be operated on this afternoon and his season is over basically.”

“It’s a massive blow for all concerned but none more so than ‘Dava’ himself, he’s been desperate to get going and into the side. It’s a real blow but it’s up to the other to step up to the plate.”

“He is in a very low place at the moment having that news delivered yesterday that it’s going to take another operation because he’s been back on the training ground for a week and looking exceptional, he’s done so much hard work behind the scenes and he’s probably in the best shape that I’ve seen him. It’s just a body blow for everyone concerned but it is what it is but it’s football. Every club and manager has their injuries they have to deal with. It’s been especially disappointing as he was a signing I expected to make a big difference to our situation and unfortunately for us and Andrew he hasn’t been able to do that. He’ll be looked after and we’ll give him all the support and encouragement from us he needs.”

One bright note for Dundee on the injury front is the return to training for striker Andrew Nelson. The manager confirmed he has returned to training and will be fit for the weekend, “He is back in full training. That’s two weeks he’s done with no ill effects to his heel injury and he’s good to go.”

The Dundee support will provide the usual fantastic backing in Paisley on Saturday having snapped up over 1600 tickets for the match and the full allocation expected the sell out, the manager said of the backing, “It’s a brilliant reaction from our fans to travel in high numbers. I thank them for that and it’s up to us to give them a performance to get excited about and that’s exactly what we will be trying to do.”

Subscribers can watch the full press conference with the manager and Craig Curran on deetv.dundeefc.co.uk.