They Wore the Dark Blue for Club and Country 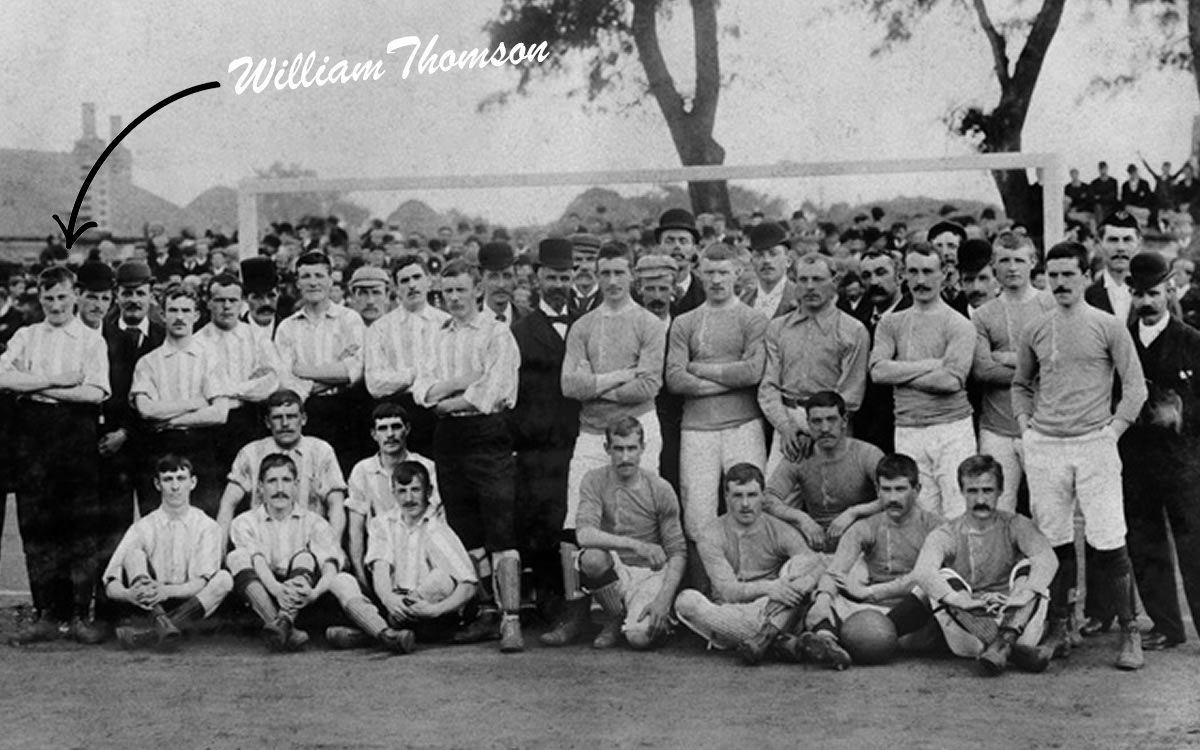 As Scotland were due to face Israel tonight in a Euro 2020 play-off, we take a look at a player who wore the dark blue for both Dundee and Scotland, William Thomson.

Thomson was one of the earliest players to be capped for Scotland whilst playing for Dundee and won his solitary cap in the first ever international in the city of Dundee.

Born in Dundee Thomson started his football career with juvenile side Clydemore FC  before joining Dundee side Our Boys in 1892. On January 7th 1893 Our Boys faced local rivals East End on a snow covered pitch and winger Thomson was on target in the 4-4 draw. However the match was abandoned ten minutes from time when the crowd broke through the ropes and pelted an East End official with snowballs when he remonstrated with them before retreating to the safety of the dressing rooms. The crowd then switched their attention to the centre circle where blows were exchanged and the committee men of both clubs thought it prudent to bring the game to an early conclusion.

In the aftermath, with both ambitious clubs wearying of the monotonous round of local fixtures, an amalgamation was proposed but was strenuously opposed by members of both clubs. However that changed on May 13th when Mr Andrew Buttar, an official of Our Boys proposed an amalgamation, suggesting the new club should apply for admission to the Scottish League and it had the desired effect as a week later the clubs met in the Mathers Hotel in Union Street to form the Dundee Football and Athletic Club.

The new club were admitted into the Scottish League at its AGM on June 12th and the new Dundee FC had to prepare a team to take its bow in August. Although Scotland international outside-left Sandy Keillor and goalkeeper Bill McKie were signed from Montrose, most of the players came from the amalgamated clubs. Ferrier, Longair, Petrie, Craik, Dundas and Gilligan came from East End while Brown, Craig, McInroy, Salmond and Willie Thomson came from Our Boys.

Conservatively therefore this small spirited winger Willie Thomson became a founder member of The Dee as he survived the merger. By all accounts he was an elusive player which enabled him to avoid the lunges of heavier opponents and despite his size had a lion’s heart.

On Saturday 12th August 1893 – it was truly the Glorious Twelfth for the city’s growing army of football fans – the new Dundee side, which included Thomson on the right-wing took the field at West Craigie Park against Rangers and started their Scottish League life with a 3-3 draw against last season’s runners-up in front of a crowd of 5000.

The following week Thomson lined up against defending champions Celtic at home in front of 8,000 and would miss just one league match in Dundee’s inaugural year.

On December 9th Thomson scored his first goal for the club with the opener in a 4-0 home win over Dumbarton and a fortnight later was on the score sheet again in a 7-3 Forfarshire Cup semi-final win over Arbroath.

In the Final at Carolina Port, which would become Dundee’s home in March, Thomson scored again in a 4-0 win over Dundee Harp, winning the Dark Blues their first silverware in their inaugural season.

With the League campaign just 18 matches Dundee filled up their calendar with glamour friendlies against English opposition and Bill was on target in an 8-2 home win over Newcastle United in April and scored the winner in a 2-1 victory over Newton Heath (the forerunner of Manchester United) on New Year’s Day.

In Dundee’s second season, Thomson was a mainstay of the side as The Dee retained the Forfarshire Cup and reached the Scottish Cup semi-final. In a three match semi-final watched by over 55,000, Dundee couldn’t get past Renton who won the second replay at Celtic Park 3-0 to end the Dark Blues’ dreams of national glory – for fifteen years at least.

In Dundee’s third season Willie was an ever present and he was rewarded for his consistent wing play with a call up for the national side. Thomson’s only appearance for his country came on March 21st 1896 and he didn’t have to travel far because Scotland met Wales in a British International Challenge match at Carolina Port.

Dundee FC supplied both wingers for the side with Willie Thomson on the right and Sandy Keillor on the left and Keillor became the first Dundee player to score for Scotland in the 4-0 win. It was the first international to be held in the city of ‘Jute, Jam and Journalism’ and attracted a crowd of 11,700.

Whereas Keillor went on to win further international honours, this was Thomson’s one and only Scotland appearance and not long afterwards the wee winger was off to try his luck in England.

In a bid to balance the books at the end of the 1895-96 season, a new Dundee FC committee arranged a close season tour of England and met some famous names like Preston North End, Burnley, Nottingham Forest, Sheffield United and Corinthians which set a new British record of 60,000. Despite providing some much needed income even sterner measures were required and amongst a cost cutting departures were Sandy Gilligan – who scored Dundee’s first ever goal – and Willie Thomson, who were transferred to Bolton Wanderers where Bill spent three years before hanging up his boots.