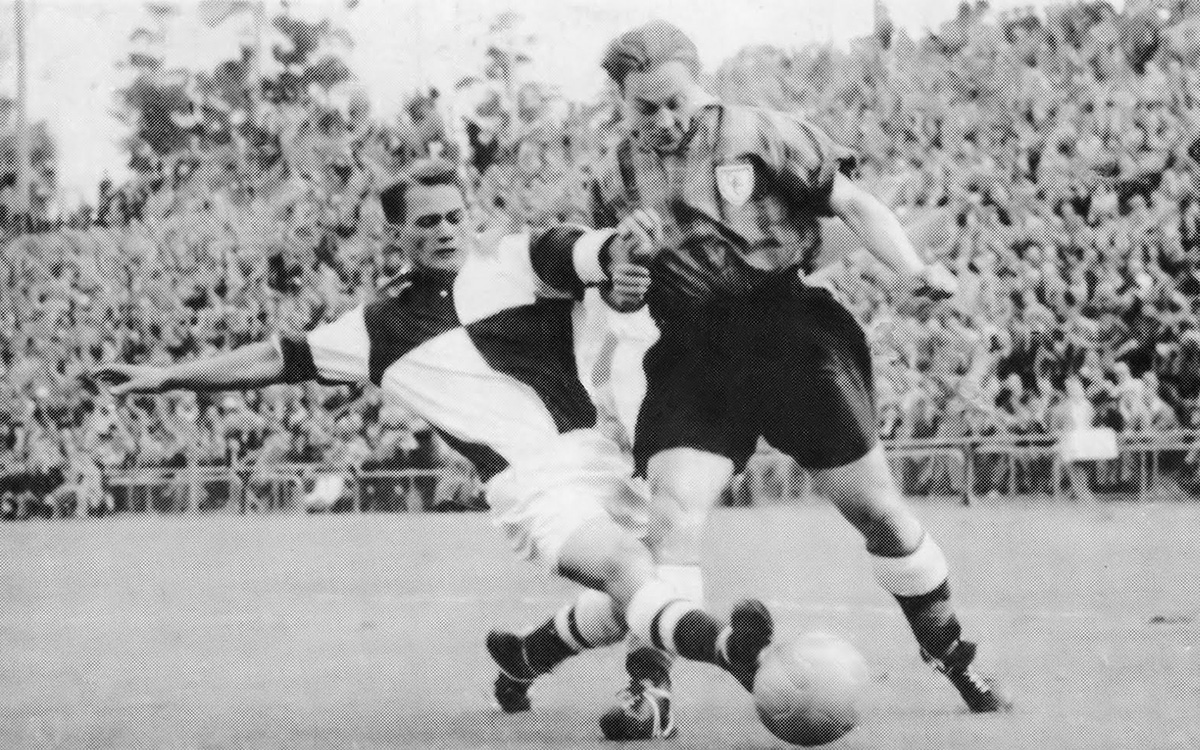 67 years ago today, the club undertook a marathon two month tour of South Africa which was to become famous in the annals of Dundee FC.

At the end of the League Cup winning 1952/53 season, Dundee were snubbed by the football authorities who declined to invite the Dark Blues to participate in the Coronation Cup to celebrate the accession of Queen Elizabeth II. Four clubs from England – Arsenal, Manchester United, Newcastle United and Tottenham Hotspur, were joined by four from Scotland – Celtic, Rangers, Aberdeen and Hibernian. Rangers had won the League and Scottish Cups while Aberdeen and Hibs were invited as runners-up in both. Dundee felt aggrieved as they had won back to back League Cups and finished higher in the League than both Celtic and Aberdeen but in the event, the tournament was won by Celtic

Instead of taking the huff, Dundee contented themselves with a summer tour of South Africa, organised by flamboyant manager George Anderson as part of the club’s sixtieth anniversary celebrations. The tour also however assisted the S.F.A., which found itself unable to fulfil a commitment it had already made. Considering their snub received in the Coronation Cup fiasco, it was a conciliatory gesture by Anderson but he was always a master of both diplomacy and publicity.

Dundee flew out to South Africa just a fortnight after their last game of the season away to league champions Rangers with their first game taking place on May 16th and their last on July 15th. Dundee took a sixteen-man squad with them and along with manager George Anderson and the directors, flew direct from London to Johannesburg on a BOAC Comet.

After their League Cup successes, the Dundee squad were now well known sporting figures and they were able to trade on their name in the Dominion by appearing in adverts and doing promotional work which helped enhance their bonuses.

The tour was coordinated by George Anderson’s friend and Dundonian Haldane Stewart, who would later manage Morton and they stayed in the best of hotels wherever they went. They were based in Johannesburg where each player had a room to themselves although when Anderson saw the room that seventeen-year-old Dave Easson had, with a wonderful view of the beach, he immediately made the youngster swap as he only had a view of the service entrance at the rear.

Dundee’s first match took place against Southern Transvaal in Johannesburg on May 16th 1953 and when they took to the field in front of 22,000, they were wearing not their regular dark blue but rather an Anderson tartan strip with a Dundee badge on the left breast chosen by manager George Anderson.

Anderson was well aware of the benefits of good publicity and as the side started to get changed for their first match, he came into the dressing room with a parcel with their new strips stating, “These will take a trick out there.” When they took to the field, the new shirts were given a great reception by the local fans and the following day, the newspaper headlines read, ‘Tartan Troops From Tayside’, as they reported on the 1-1 draw.

Bobby Flavell, who had finished the trophy winning season with twenty-five goals, got Dundee’s strike against Southern Transvaal and in their second game against Natal in Pietermarizburg, he scored a hat-trick with ‘Pud’ Hill getting Dundee’s other counter in a 4-1 win.

Three days later in Durban, Dundee went one better, winning 5-0 in a rematch with Natal and Flavell was again on the mark with a double with Billy Steel, Doug Cowie and Alfie Boyd from the penalty spot completing the scoring.

Dundee were greeted very warmly everywhere they went and with a large number of Scottish ex-pats in South Africa, they enjoyed scores of functions and receptions by Caledonian societies as well as by their hosts and they were in such demand that they turned down more functions than they actually attended due to simple time constraints.

The undoubted highlight of these receptions was when the Dundee squad were presented to Queen Elizabeth, the Queen Mother and Princess Margaret at a Royal Garden Party in Bulawayo in Rhodesia and each player was presented in turn to the Royals who showed great interest in the tour.

During the trip they also visited the Rand Gold Refinery in Johannesburg, the world-reknowed cableway trip to Table Mountain and the famous ‘Big Hole’ Diamond Mining in Kimberley, the first diamond mine in South Africa.

The players were given their match fees immediately after every game, even if they didn’t play, to help them enjoy the trip as much as possible. For one trip away from Johannesburg, Albert Henderson had to remain behind as he had fallen ill and Dave Easson also had to stay to look after him, but as soon as the Dundee party returned, George Anderson went straight up to see how they were doing before he went to his own room and gave them their wages for the match, despite the fact they didn’t even travel.

Dundee repeated their 5-0 scoreline in their fourth game on May 27th against a Border XI in East London with Ronnie Turnbull, who had just returned to the Club from Swansea after spells with Sunderland and Manchester City, scoring twice alongside the fit again Bert Henderson, Billy Steel with a penalty and Doug Cowie who had now scored the same of goals on tour as his entire seven-year Dundee career.

Dundee’s free-scoring form continued with a 5-0 win over Eastern Province in Port Elizabeth and a 4-0 win over Western Province in Cape Town, and with the Dundee party moving to a different location for every match in their first month in South Africa, they were getting a fantastic opportunity to experience and visit the whole country.

Dundee were on their travels again as they defeated Griqualand 2-0 in the Northern Cape in Kimberley, Eastern Transvaal 4-2 in Benoni before an impressive 9-2 rout over Orange Free State in 2010 World Cup venue Bloemfontein, in which Ronnie Turnbull scored a hat-trick.

On June 14th they faced a Lourenco Marques XI 3-1 in Portuguese East Africa and a brace from Cowie and one from Flavell earned a 3-1 win. Lourenco Marques was the capital of Mozambique before it gained independence from Portugal in 1975 and is today known as Maputo and the representative side sent out to face Dundee was a mixture of African and Portuguese players.

Dundee’s next two matches were again at 2010 venues with a 2-0 win over Northern Transvaal in Pretoria and a 4-0 win in the second game against Southern Transvaal in Johannesburg. The South Transvaal match was unusual in that in front of a crowd of 10,000 it was played under floodlights, which was an innovation that was still in its infancy. After some unsuccessful experiments with floodlights in the late nineteenth century, the first match in Scotland played under ‘proper’ floodlights was in November 1951 in a friendly between Stenhousemuir and Hibs and they weren’t used in competitive games until 1956, so it would have been a unique experience for the Dundee players.

All these matches however were warm-ups for the three-game test series against the South African national team and the first of these came in Durban on June 27th when Dundee suffered their first defeat of their tour when South Africa won 1-0.

Dundee however bounced back in their next two matches in a double header against Southern Rhodesia with a 4-1 win in Salisbury in which Doug Cowie scored a hat-trick and an 8-0 victory in Bulawayo after they had attended the Royal Garden Party.

The second test match against South Africa took place in Johannesburg on July 11th and when they arrived at the stadium, they discovered that there were no shorts with the kit when unpacking the hamper. Assistant-manager Reggie Smith had been responsible for the kit and in trying to hide the tartan shirts, had forgotten to pack the team’s shorts for the match.

When Smith told the South African team manager Mr. M. Shackleton, he organised a police car and convoy to take Dave Easson back to the team hotel to collect the shorts. They travelled through the streets in Johannesburg with all the lights set at green with a police motorcade and when Easson returned with the shorts just twenty minutes later much to Smith’s relief, he couldn’t believe what their South African hosts did in an effort to help them out.

Tartan shirts and recovered shorts on, Dundee were led on to the field by a pipe band and they gained revenge for that earlier loss with an emphatic 5-0 win. Bobby Flavell scored his second hat-trick of the tour in the Rand Stadium and the other two goals were scored by Ronnie Turnbull and Dundee’s very own South African, Ken Ziesing.

Four days later in Cape Town, Zeising was again on the score sheet as Dundee played the last of their seventeen matches and won the third test against South Africa 5-3. Additional goals from Steel, Cowie and a Turnbull double meant Dundee won the test series against their hosts by two matches to one and it was a very enjoyable end to a memorable trip.

The two-month trip was a marvellous experience for the Dundee players and officials as they won fifteen of their games with one win and a draw and scored an impressive seventy goals, conceding twelve. Bobby Flavell would finish top scorer with seventeen goals with Ronnie Turnbull in second, scoring twelve while Doug Cowie went home with nine goals to boast about, having only scored twice in competitive games for Dundee since 1946.

The results of Dundee’s South African tour were as follows:

The tour was one of the most extensive ever undertaken by a British football club at that time and by the time they had arrived back in Scotland, The Dark Blues had covered no fewer than 20,000 miles, of which 12,000 were in the air. In transit and on tour they visited eleven different countries and as well as flying around Southern Africa, they also travelled by rail and sailed from Cape Town on the famous Pretoria Castle passenger liner which had been converted into an aircraft carrier by the Royal Navy during the Second World war.

Dundee played in six of the nine cities which hosted the 2010 World Cup matches and at the end of the trip, captain Alfie Boyd decided he would stay in South Africa having been offered a coaching post with the Marist Brothers club. Club captain Boyd had enjoyed his time in South Africa when he was stationed there during the War and where he had met his wife and he now wished to return to her homeland where his daughter was born.

It meant that Boyd missed the return game with South Africa when they visited Dens Park in October as part of their two-month tour of the British Isles and Europe and the match ended in a 3-1 Dundee win, with goals from Albert Henderson (2) and Gerry Burrell.

South African football was very much in development at this time and they were one of only four African nations to attend F.I.F.A.’s 1953 congress and demanded, and won, African representation on the F.I.F.A. executive committee. Fifty-seven years later, South Africa hosted their own World Cup and football had progressed a long way from the time when the ‘Tartan Troops from Tayside’ had toured their country and made such a wonderful, lasting impression.