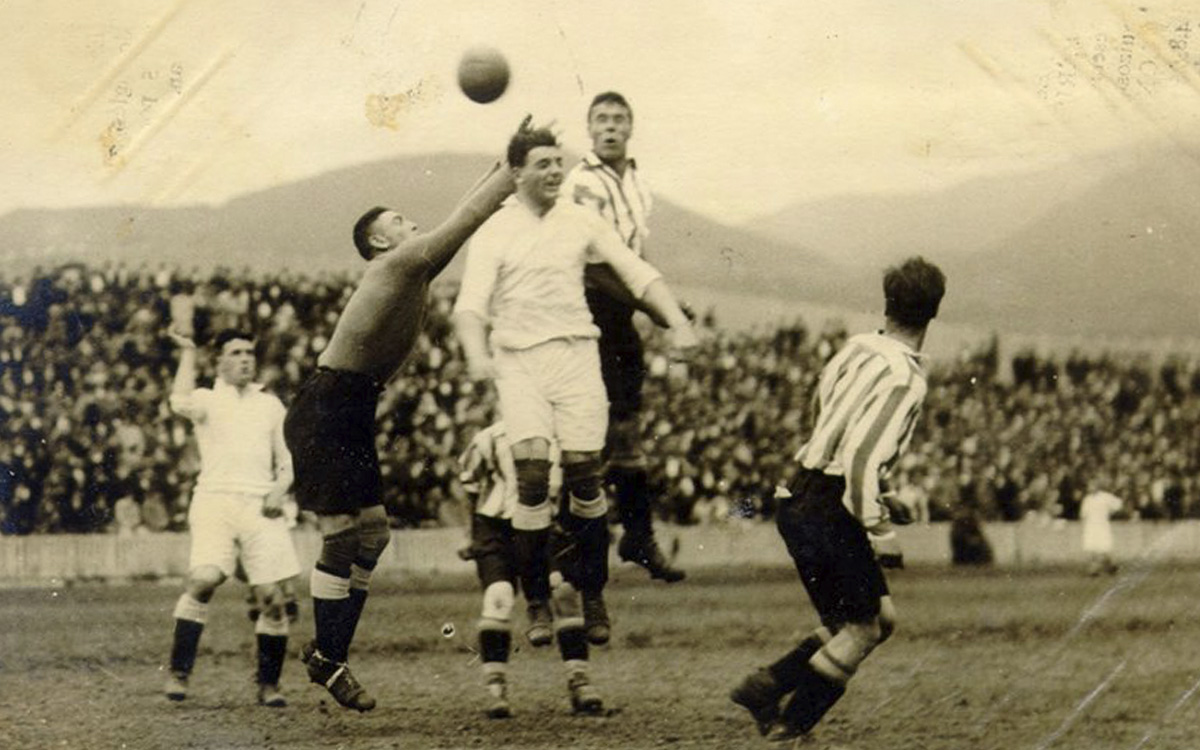 Just under a century ago, Dundee undertook two summer tours of Spain in 1923 and 1924 where they faced and defeated not only Barcelona but also Real Madrid in a series of games, famed for a dodgy referee, lemons in the shade, protests, walk offs and the police trying to arrest Dundee’s players.

When the 1922/23 season finished on April 14th with a 3-1 win at home to Motherwell, the players had little time to draw breath as they had to pack their kit bags straight away and embark on a lengthy trip by boat and train to Spain where they would undertake a seven game tour during May and June.

It was the first time Dundee travelled abroad to play and was the first time Dundee would line up against European opposition and the honour of being the first foreign club Dundee would play against went to Athletic Club Bilbao. The match took place on May 20th in Bilbao’s Estadio San Mamés which was opened in 1913, making it Spain’s oldest built stadium and is so called because it was erected next to the San Mamés church.

A 10,000 Basque crowd turned up at the ground nicknamed La Catedral (the cathedral) to witness a fine 3-0 win for Dundee thanks to goals from Jock McDonald and Davie Halliday.

Just 24 hours later, another 9000 turned up to watch a rematch and this time Dundee were held to a 1-1 draw with the goal coming from that season’s top scorer Davie McLean.

Next up for Dundee was the mighty Real Madrid who were founded as Madrid in 1902 and the word ‘Real’ (the Spanish tern for royal) was given to the club by the King in 1920 together with the royal crown in the emblem.

The match was to be only the second to take place in Madrid’s new 22,500 capacity Estadio Charmartin which was inaugurated on May 17th 1923 and on May 24th Dundee ran out 2-0 winners with the prolific Davie Halliday getting his second brace of the tour.

A third tour brace from Halliday helped Dundee to a 3-0 win over Valencia in the next match on May 26th and the following day Jock McDonald got his second of the trip as the sides met again and Dundee won 1-0.

Undefeated in five matches Dundee now faced Barcelona but they couldn’t overcome the Catalan giants with 3-1 and 2-0 defeats on June 3rd and 4th. Barcelona’s stadium the Camp de les Corts was only a year old with St Mirren having played in the opening game and for the Dundee matches 12 months later, which took place a month after it had hosted its first Copa del Rey Final, crowds of 20,000 and 28,000 turned up to watch their second Scottish side.

Madrid themselves would get a chance for revenge over Dundee for the previous year’s losses when they faced the Dark Blues in a two-day double header but they turned out to both be ill tempered games.

This time it was Barcelona who were up first and with Dundee keen for revenge for the defeats twelve months previously, the tour started superbly with two victories over the Catalan club. The first was a 2-0 win with both goals coming from Davie Halliday who had just finished as Scotland’s top scorer with 38 league goals; a Dens Park record which still stands today and the second was a fine 2-1 win in which Davie McLean and Charlie Duncan got the goals.

These wins over Barça, coupled with the victories over Real Madrid in the summer of 1923 meant that Dundee were the first club from outside Spain to defeat both Barcelona and Real Madrid on their home grounds.

Madrid themselves would get a chance for revenge over Dundee for the previous year’s losses when they faced the Dark Blues in a two-day double header but they turned out to both be ill tempered games.

With Dundee leading 1-0 in the first match, the game exploded when the Spanish referee, who had officiated from the shade in the stand with a lemon in his hand, awarded Real a dubious penalty.

The Dundee players were incensed by this and when the referee came from under his cover and placed the ball on the spot, an exasperated Willie Rankine kicked it into the net. At this, the official tried to slap Rankine in the face but he was quickly pushed away by the Dundee centre-half who was then sent off for his trouble. At first he refused to go and so six armed policeman tried to intervene but when he shook them off, the entire Dundee team walked off in protest.

There was uproar amongst the 6000 crowd and it looked as though the police would have to worry more about the crowd than the conduct of Rankine but after the intervention of Dundee manager Sandy MacFarlane (inducted into Dundee’s Hall of Fame in 2015) and treasurer Willie McIntosh, the game continued when they persuaded their players to take to the field again and was played out to a 1-1 draw.

Twenty-four hours later double the number of fans turned up for ‘round two’ but they witnessed a very satisfying 2-1 win for Dundee thanks to goals from Charlie Duncan and Crawford Letham.

Dundee then moved to the Galicia province for the first time for three matches against Deportivo de La Coruña which saw The Dee end their Spanish adventure with a win, a draw and a loss.

The first match finished 3-3 with Davie McLean getting a hat-trick but the second match finished with Dundee’s heaviest defeat in Spain with a 5-1 loss. The Dark Blues did however finish their tour on a high with a 2-0 win in the final match.

The two close season tours, which were Dundee’s only ones until 1946, saw Davie Halliday and Davie McLean continue their goal scoring partnership that had been so successful domestically, with both netting eight apiece.

Despite not getting much of a break two summers in a row it did little harm to Dundee’s form when they got home as they would finish the season by reaching the 1925 Scottish Cup Final.

Dundee’s first overseas trips were both a huge success with 174,000 watching the fourteen matches. Victories over Barcelona and Real Madrid are something that Dundee fans can only dream about today but they can take pride in the fact their Club were the first continental side to beat them both on their own patches.