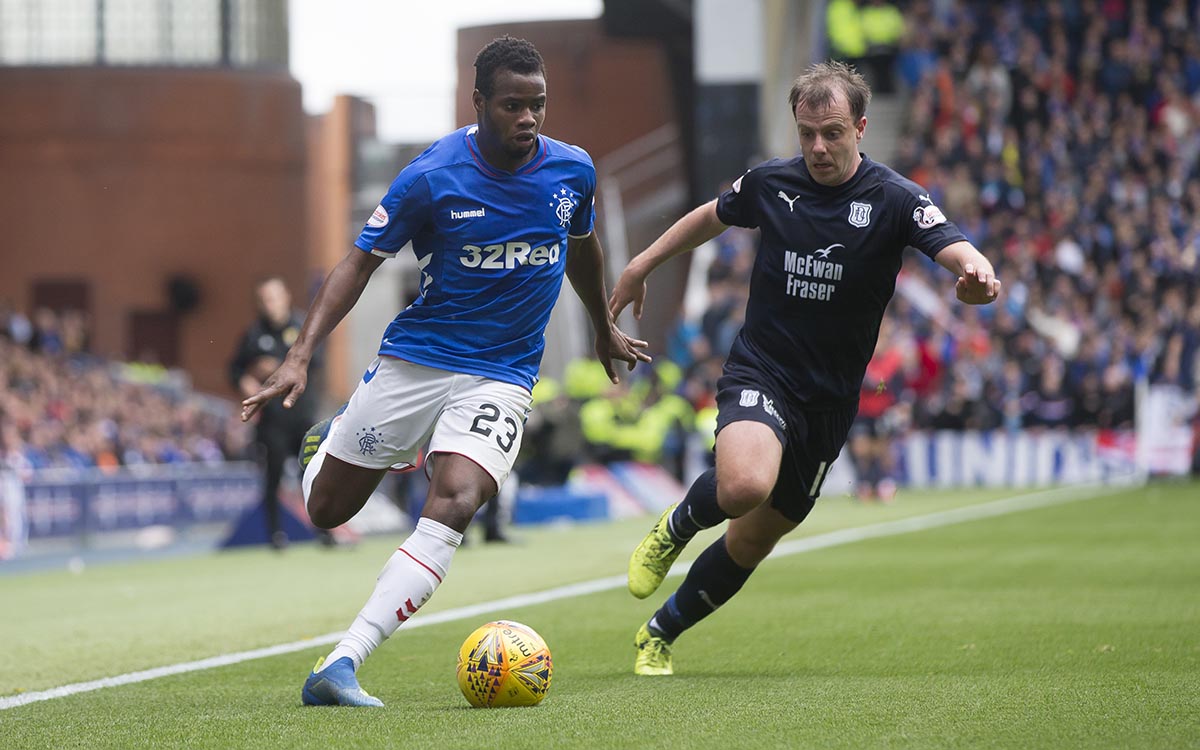 Dundee face Rangers at Ibrox on Wednesday and here we round up everything you need to know ahead of the match.

Dundee fans will be housed in the Broomloan Road Stand Lower and the prices are as follows:

Tickets are available at the ticket office, in person or by phone (01382 889966 option 1), and via the website at www.dundeefc.co.uk then click on “TICKETS” at the top of the website

Dundee moved off the bottom of the table with a marvellous fighting performance in a 1-1 draw against Rangers at the Kilmac Stadium at Dens Park last December. Kenny Miller put the Dark Blues ahead with an early goal but they had little time to settle on the lead. Nathan Ralph was sent off and Andy Halliday equalised in quick succession leaving Dundee to hold on for 70 minutes. They did so magnificently in a performance that showed coolness, strength of character and determination in abundance.

Booked: Kusunga (squaring up to Lafferty).

Rangers’ season started back in June in the Europa League qualifiers and they successfully negotiated through to the group stages by dispatching FK Shkupi of Macedonia, Osijek of Croatia, NK Maribor of Slovenia and Russian side FC UFA.

Steven Gerrard’s first Premiership match in charge was a tough trip up to Pittodrie and despite losing Alfredo Morelos to a red card after just 12 minutes were only denied victory when The Dons equalised in injury time.

After defeating St Mirren 2-0 in their first Premiership home game Rangers knocked Kilmarnock out the Betfred Cup with a 3-1 win at Rugby Park but were again denied all three points in injury time in the next game at Fir Park when Motherwell made in 3-3 with seconds to go.

In the first Old Firm game of the season Gerrard lost his unbeaten record when an Oliver Ntcham goal was enough to give the hosts victory at Celtic Park.

After the Dark Blues’ 4-0 defeat at Ibrox after the international break, Rangers secured an excellent 2-2 draw away at Villareal in their first Europa League group game. They followed this up in Europe with two home games which a saw a 3-1 win over Rapid Vienna and a 0-0 draw against Spartak Moscow but in the return game in Russia lost 4-3 in a game they should have won.

In their last home Europa League game, a 0-0 draw was secured with Villareal despite being down to ten men for the whole of the second half but a 1-0 defeat in Vienna ended their European dream.

In the Betfred Cup Rangers defeated Ayr United 4-0 at Ibrox before succumbing to Aberdeen in the semi-final.

Rangers’ Premiership campaign saw them climb steadily towards the top of the table, making them genuine title contenders. After a surprise defeat at Livingston, the Light Blues defeated Hearts (3-1), Hamilton (4-1), St Mirren (2-0), Motherwell (7-1), Livingston (3-0) as well as drawing with Kilmarnock (1-1) and before their last visit to Dens hit the top of the Premiership for the first time after a 2-1 win over Hearts at Tynecastle.

However they weren’t their long with a 1-1 draw at Dens following a 1-0 defeat at home to Aberdeen and two draws with Rangers in December but the year ended on a high with a 1-0 win over Celtic at Ibrox thanks to a Ryan Jack winner.

After the winter break Rangers lost 2-1 at Kilmarnock but bounced back with consecutive Premiership wins over Livingston, St Mirren and Aberdeen.

In the Scottish Cup Rangers despatched Cowdenbeath 3-1 in Fife before brushing Kilmarnock aside with 5-0 replay win at Ibrox in which Morelos scored four after the first game had ended 0-0 at Rugby Park.

Rangers dropped two points in a 0-0 home draw with St Johnstone but before the Dark Blues’ visit to Govan did The Dee a favour with a 5-0 win at Hamilton.

Rangers 2018/19 matchday programme is an 84-page full colour edition which is available in and around the stadium priced £3.50.

The pre-match press conference is also available to view on DeeTV from Tuesday.