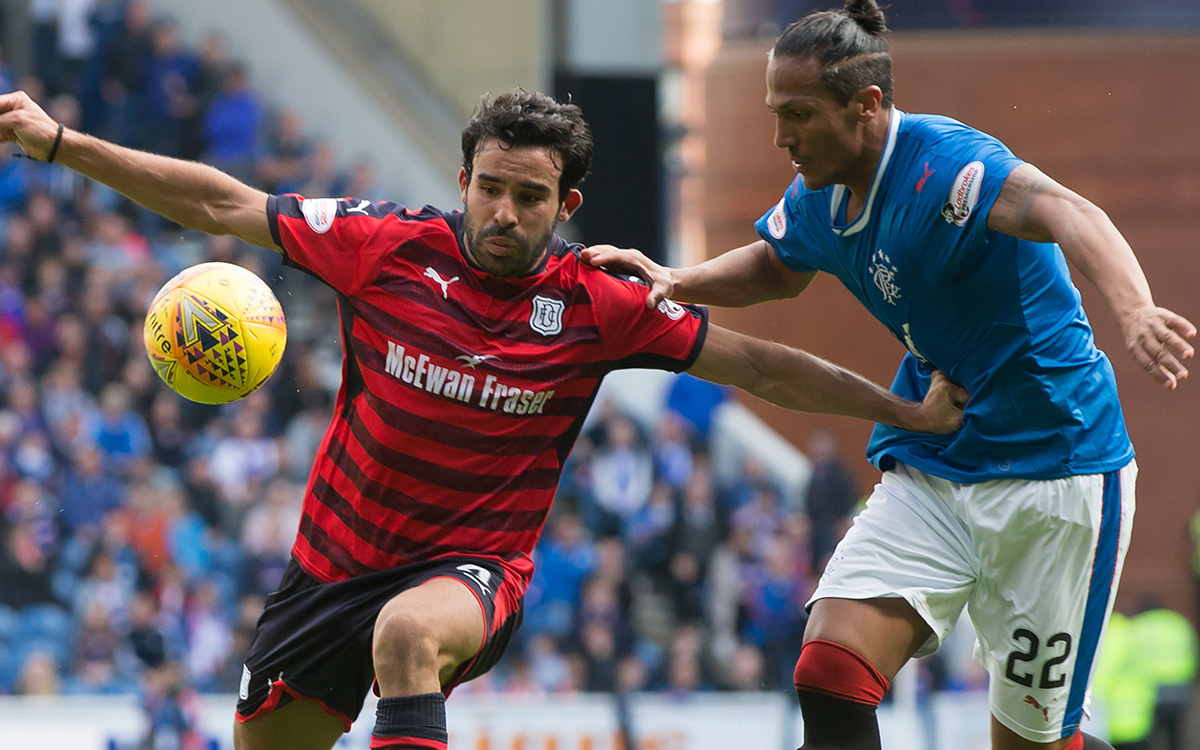 Dundee travel to Ibrox on Saturday for the last pre-split Ladbrokes Premiership fixture against Rangers and here we round up everything you need to know ahead of the match.

Mark O’Hara was the Dark Blue hero last November scoring both goals as Dundee beat Rangers 2-1 at Dens Park. O’Hara’s first goal midway through the second half was quickly cancelled out by Josh Windass’s equaliser. However, when O’Hara scored again 10 minutes from full time there was no way back for Rangers.

Rangers’ season started back in June when they faced Luxembourg side Progres Niederkorn in a Europa League first qualifying round tie and despite winning the first leg 1-0 at Ibrox thanks to a Kenny Miller goal, crashed out in one of the worst results in their history with a 2-0 defeat in the second leg.

Manager Pedro Caixinha has over hauled the squad in his first pre season at Ibrox and it was one of his new signings Graham Dorrans who scored a double at Fir Park to give them a 2-1 win over Motherwell on the opening day in the Premiership season.

This was followed up with a convincing 6-0 win at home to Dunfermline in the Betfred Cup second round but their league campaign has stuttered since.

Back to back home games against the Edinburgh sides saw just one point taken from six after a surprising 3-2 defeat to newly promoted Hibernian and a 0-0 draw with Hearts.

Rangers did however get their Premiership campaign back on track in the last game before the international break with a 3-1 win over Ross County in Dingwall; The Gers first ever league win over the Highland side.

That win was followed up with the 4-1 win over Dundee at Ibrox and then a double header with Partick Thistle at Firhill and after a 2-2 Premiership draw, Rangers knocked The Jags out of the League Cup quarter-final 3-1 after extra-time.

This set up a semi-final meeting with Motherwell at Hampden and The Steelmen bullied Rangers out of the game and progressed to the Betfred Cup Final with a 2-0 win.

It was a result that was to do serious damage to manager Pedro Caixinha’s tenure at Ibrox and after a 1-1 home draw with bottom of the league Kilmarnock, the Mexican was relieved of his duties after just eight months.

Graeme Murty was put in caretaker charge for the second time in a calendar year and his first game was a 3-1 victory over Hearts at Murrayfield. Murty’s side then recorded a 3-0 win over Partick Thistle at Ibrox but

After the international break went down surprisingly 2-0 at home to Hamilton and the following week lost 2-1 to Dundee at Dens thanks to a Mark O’Hara double.

Rangers bounced back from these defeats with two consecutive wins over Aberdeen which helped the Light Blues to get back into contention at the top of the league.

This was followed by December wins over Ross County, Hibs, St Johnstone and Motherwell and a draw at Celtic Park and Murty was rewarded with being appointed full time manager until the end of the season.

In the Scottish Cup away wins at Fraserburgh and Ayr United and then at home to Paul Hartley’s Falkirk has set up a semi-final meeting with Celtic at Hampden next week.

In the Premiership, an Old Firm defeat at Ibrox was followed by home defeat to Kilmarnock, who also beat the Gers in December and in their last league game came back from 2-0 down at Fir Park to draw 2-2 with Motherwell.

Dundee fans will be housed in the Broomloan Road Stand Lower

Rangers 2017/18 matchday programme is an 84-page full colour edition which is available in and around the stadium priced £3.50.