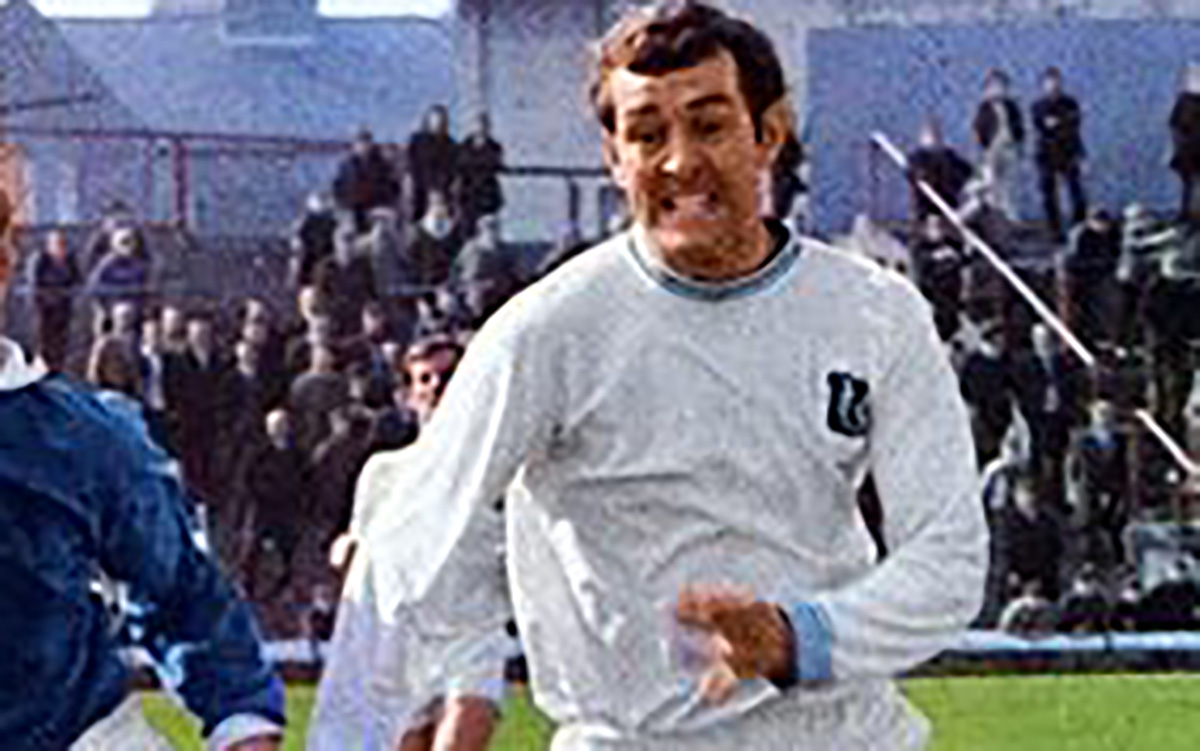 As Dundee host St Johnstone in the final match of 2018, we take a look at a player who has played for both clubs, Doug Houston.

Houston joined Dundee immediately after the Dark Blues won the Scottish League Championship in 1962 and would spend 11 years at Dens Park during which he would play in the1967 League Cup Final. A versatile player who could play in a variety of positions, Houston would go on to captain the Club and would become the only player to play in two European semi-finals.

Born in Glasgow on April 13th 1943, Doug Houston started his career as an amateur with Queens Park which allowed him to combine playing with studying at Jordanhill College to become a P.E. teacher and he would later teach in the City of Discovery.

It was while studying at Jordanhill that Houston met future Scotland manager Craig Brown and Brown, who played nine times in Dundee’s championship year, recommended the left-winger to Dundee manager Bob Shankly who signed the 19 year old from The Spiders in the summer of 1962.

Dundee had won the League Flag the previous April but Houston managed to break into the side straight away and made his debut in the first league game of the 1962/63 season. Dundee however got off to the worst possible defence of their title with a 2-0 loss to Hearts at Tynecastle but Houston retained his place on the left wing for the next game three days later when the Dark Blues faced Dundee United in the League Cup at Dens. It was a much happier home debut for Doug as The Dee won 2-1 and the goals both came from veteran Gordon Smith who was twice Houston’s age.

In his first season Houston managed to play 23 times, with injury to league winning left winger Hugh Robertson giving Doug the chance to make his mark. In the first leg of the European Cup first round tie away to Sporting Clube de Portugal, an injury to Robertson allowed Houston to make his European debut in the Portuguese capital but Dundee went down 1-0 thanks to a controversial last minute winner.

Robertson managed to recover for the second leg 4-1 win at Dens but he was out for two months in the aftermath and in that period Houston got a run in the side. He was on target for the Dark Blues in the 10-2 home win over Queen of the South in which Alan Gilzean scored seven and in his Dundee career managed 21 goals.

Dundee progressed to the European Champions’ Cup semi-final that season and injury again to Robertson meant that Houston lined-up in the San Siro against A.C. Milan and again in the second leg at Dens but unfortunately the Dark Blues went down 5-2 on aggregate.

Over the next few seasons, Doug proved himself to be extremely versatile and played in a variety of positions in both midfield and defence. He would play as a left-back, sweeper or winger and it was in his forward role that he scored in the European Cup Winners’ Cup tie at home to Real Zaragoza in 1964.

By season 1967/68, Houston was an important part of the side and had started the campaign in midfield but when Dundee reached the League Cup Final in October, Doug dropped back to defence to accommodate Alex Bryce out wide.

In one of the most exciting finals ever seen at the National Stadium, European Cup holders Celtic defeated the Dark Blues 5-3 in front of 66, 660 fans with the Parkhead side maintaining a two goal lead for the majority of the game. With just ten minutes played Dundee were 2-0 down but George McLean made it 2-1 before the break. With 17 minutes left Celtic made it 3-1 before Jim McLean pulled another goal back but a defensive mix-up allowed Bobby Lennox to make it 4-2. Another goal from George McLean with five minutes left gave Dundee hope before Willie Wallace broke away to make the final score 5-3.

It was a huge disappointment for Doug and his team mates but they did have the small consolation of playing in such an enthralling game.

Four days later Dundee put that disappointment behind them when they defeated Royal Leige 3-1 in the second round of the Inter-Cities Fairs Cup with Doug back in the midfield and a second leg 4-1 win in Belgium sent Dundee through to the quarter-finals after The Dee received a bye in round three.

Houston didn’t play in either the first round match with D.W.S. Amsterdam or the quarter-final match with F.C. Zurich but after two 1-0 wins over the Swiss side, Doug was back in the side on the bench for the semi-final first leg match at Dens against the mighty Leeds United.

He didn’t get on but three days later staked a claim for a place in the second leg when he scored the winner in a 4-3 Forfarshire Cup Final match against Dundee United. It worked as Doug started the match at Elland Road but a 1-0 victory for Leeds meant that coupled with the 1-1 draw at Dens, Don Revie’s side progressed to the final where they defeated Hungarians Fenencvaros 1-0 over two legs.

Houston’s appearance however meant that he became the only Dundee player to play in two European semi-finals while also having played in all three U.E.F.A. club competitions and his 16 European appearances is only one short of the club record.

At the turn of the decade Houston had been appointed club captain and he became an influential skipper at Dens leading them out in the famous U.E.F.A. Cup ties against old foes Cologne and A.C. Milan in 1971. Houston was the only survivor from the European Cup clashes of nine years before and after a memorable 5-4 aggregate win over the Germans, Doug was once again in the San Siro to face the Rossoneri.

Dundee gave themselves a mountain to climb after a 3-0 defeat in Italy but very nearly turned it around with a 2-0 home win but their constant pressure couldn’t get that elusive equaliser.

The following season 1972/73 was Houston’s 11th and last in a Dark Blue jersey as on the last day of the season he was subject of a shock £30,000 move to Rangers. Just hours earlier the popular captain had scored the equaliser in a 2-2 draw with Hearts at Dens but a long standing disagreement between the articulate midfielder, who was a qualified coach, and manager Davie White over coaching and tactics, hastened his departure.

His time at Ibrox didn’t last very long and he joined Dundee United for £10,000 before the year was out and had four years at Tannadice before finishing his career at St Johnstone where he played over 50 times in the next two years.

Houston stayed in Tayside for his managerial career, taking over the hot seat at Brechin in 1979 and after four years at Glebe Park, he took up the reigns at Forfar until 1986.

A great thinker of the game, Doug Houston was a plucky and tenacious performer who served the Dark Blue with distinction and even the most optimistic of Dundee fans would struggle to believe that anyone will ever play in more European semi-finals than he proudly did.