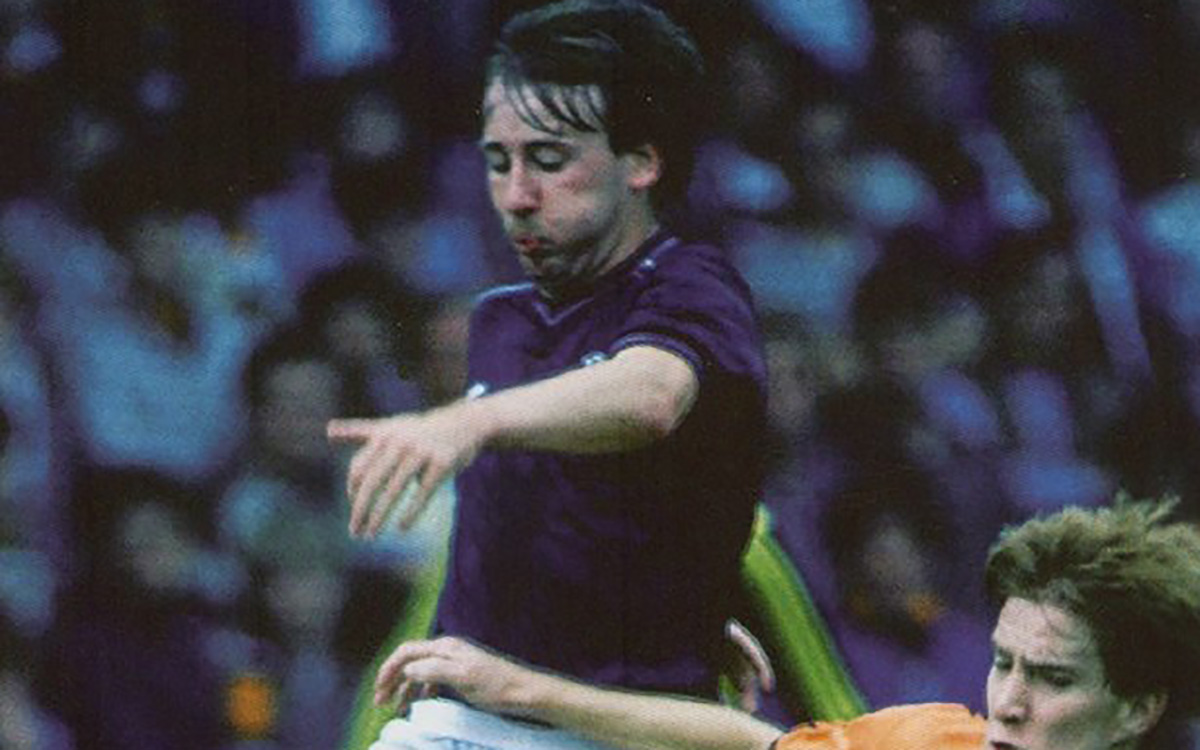 As the Dark Blues travel to Ayrshire this weekend, we take a look at a player who has played for Dundee and Kilmarnock, Ray Stephen

Nicknamed ‘Shaky’, Ray was a product of the The Dee’s youth system and made his debut in August 1980, coming off the bench for the mercurial Jimmy Murphy in a 2-0 home League Cup win over Arbroath.

Ray made his league debut later that season in November when he again came off the bench to replace Murphy and made an immediate impact by scoring the winner in a 2-1 win over Clydebank at Dens.

His scoring league debut meant that he made his first start the following week at home to Motherwell and in total Ray made 226 appearances for Dundee becoming a prolific goal scorer with 60 goals to his credit. He would therefore make more appearances than other striking legends such as Alan Gilzean, Billy Pirie, Charlie Cooke, Tommy Coyne and Claudio Caniggia to name but a few and scored more goals for the Club than the aforementioned Caniggia and Cooke as well as Billy Steel and the same number of goals as Tommy Coyne.

In his first season, Ray helped Dundee secure promotion back to the Premier Division, pitching in with eight goals in q9 appearances, including a crucial winning strike in the penultimate week away to Falkirk.

Ray also earned a place in the starting line up for the 1980 League Cup Final against Dundee United after scoring five goals in seven games since his league debut a little over a month before. He had also featured in the semi-final second leg against Ayr United and in the Final, he was famously brought down in the box by United ‘keeper Hamish McAlpine just after ‘The Arabs’ had opened the scoring only to see Dundee referee Bob Valentine wave away any appeals.  Ray was convinced it was a penalty but it wasn’t to be and as Dundee went down disappointingly 3-0, Stephen was seen as one of the few Dundee successes on a gut wrenching day.

Upon Dundee’s return to the Premier League, Ray became a key player in the side and in 1982 was rewarded for his displays with a Scotland Under-21 cap against Belgium ‘across the road’ at Tannadice.

Tannadice was a fairly happy hunting ground for ‘Shaky’ as he was on the winning side away to United on four occasions, most memorably in a 4-3 win in November 1984.

Against the Old Firm, Stephen also had an excellent record, playing in 14 wins, scoring nine goals. Against Rangers, he played in ten victories, scoring three goals including the third in a superb 3-1 victory at Ibrox in March 1985.

His goal scoring record against Celtic was much better, scoring six times against the Parkhead side and played on the winning side four times.  One of those wins, in which he scored, came in a 3-2 win at home in March 1984 and this match came in a third successive game against the Old Firm, with the previous two outings against Rangers in the Scottish Cup.  Ray played the full ninety minutes in all three games which saw a 2-2 draw with The Gers at Dens in the quarter-final before winning the replay 3-2 in Glasgow a week later, three days before another 3-2 win, this time over Celtic.

After that quarter-final win at Ibrox, Dundee faced Aberdeen at Tynecastle and Stephen started on the bench.  He came on in the second half to replace Lex Richardson but couldn’t prevent Alex Ferguson’s Dons from reaching the Final with a 2-0 win.

That semi final would be the furthest Ray would go in the Scottish Cup with The Dee but in the next two seasons, he would score in consecutive 2-1 quarter final replay defeats away the Celtic and Aberdeen after both matches were drawn 1-1 and 2-2 respectively at Dens.

Stephen twice topped the Dundee goal scoring charts when he was top league scorer in 1984/85 and was overall top goal scorer in all competitions the next year with 18 strikes in 37 appearances.

The following season, 1986/87, Ray pitched in with six goals before he was transferred to Nancy in France in November and the man to take him to France was none other than Arsene Wenger. Then making his way in the game as manager as of Nancy and the alert Wenger had been motivated to make the trip to Tayside by memories of seeing Stephen play for Dundee in pre-season games in Germany. They met in the Swallow Hotel on the Kingsway (now the Double Tree Hilton) the day after a 3-0 win at Tannadice and after the clubs agreed the fee, he was on his way to Lorraine.

The move came about when Dundee went to Germany pre-season and played close to Strasbourg where Wenger was from and Arsene hopped across the border to see Shaky score a few goals. Dundee toured West Germany in the summers of 1984 and 1985 and Ray scored eight goals on these trips including a hat-trick against FC Mayen in a 4-0 win on July 27th 1985.

Stephen became an instant hit at the Stade Marcel Picot scoring twice on his debut against Toulouse and the Nancy website describes it by saying. “From his first game under the colours of Nancy, Ray felt transported by burning sensations of intoxication, as he scored twice against Toulouse. In an hour and a half, Marcel-Picot realised it had before it a new darling. The club Dundee from the land of the thistle (Nancy have a thistle on its badge) was not swimming in financial euphoria from the fee and did not appreciate his value but this gift from heaven, brought by Arsene Wenger appreciated his true value.”

Stephen scored seven goals in 22 appearances in his debut season in France (after scoring six times before he left Dens) and in his first full year with Nancy scored 23 times in 37 appearances, beating his best seasonal total at Dens by five. It total he would score 58 goals in 161 appearances over five seasons which make him fifth on Nancy’s all time goal scoring list; a list headed by Michel Platini who played for Nancy for eight years during which he won two French Player of the Year Awards and scored the winning goal in the 1978 French Cup Final against Nice.

Ray even played in Platini’s testimonial match in Nancy in May 1988 when France drew 2-2 with a World XI in a game raising for money for drug awareness and drug abuse charities in front of 35,000 at the Stade Marcel Picot and played alongside the likes of Maradona, Zico, Matthäus, Tardelli, Pfaff and former Dee Gordon Strachan.

His highlight with Nancy however came when he helped them win the Ligue 2 title to get promotion back to the French top flight. Stephen formed a potent partnership with David Zitelli who would play for Hibs from 2000-2002 and between them the pair scored 31 goals on the way to winning the title with Ray netting 17.

Stephen had been appointed captain that season by manager Robert Dewilder and in an “unforgettable match”, Ray scored twice as Nancy defeated nearest rivals Strasbourg 4-3 to win promotion.

Stephen left France in 1991 to join this weekend’s visitors Kilmarnock and after a year at Rugby Park joined Cove Rangers back in his hometown Aberdeen where he finished his playing career and now resides and is still a regular visitor to Dens.

Described by striking partner Eric Sinclair as ‘a real powerhouse with a good eye for goal’, Ray will always be fondly remembered by the Dundee support.

At a supporter’s diner in 2004, Ray proclaimed how much he still loved Dundee, how honoured he was to be invited and that the Dundee result was still the first he looked for every week.  He also stated how much that 1980 League Cup Final defeat still hurt and that he would love one day to see a rematch in order to get revenge not only for that defeat but also for the penalty that never was.