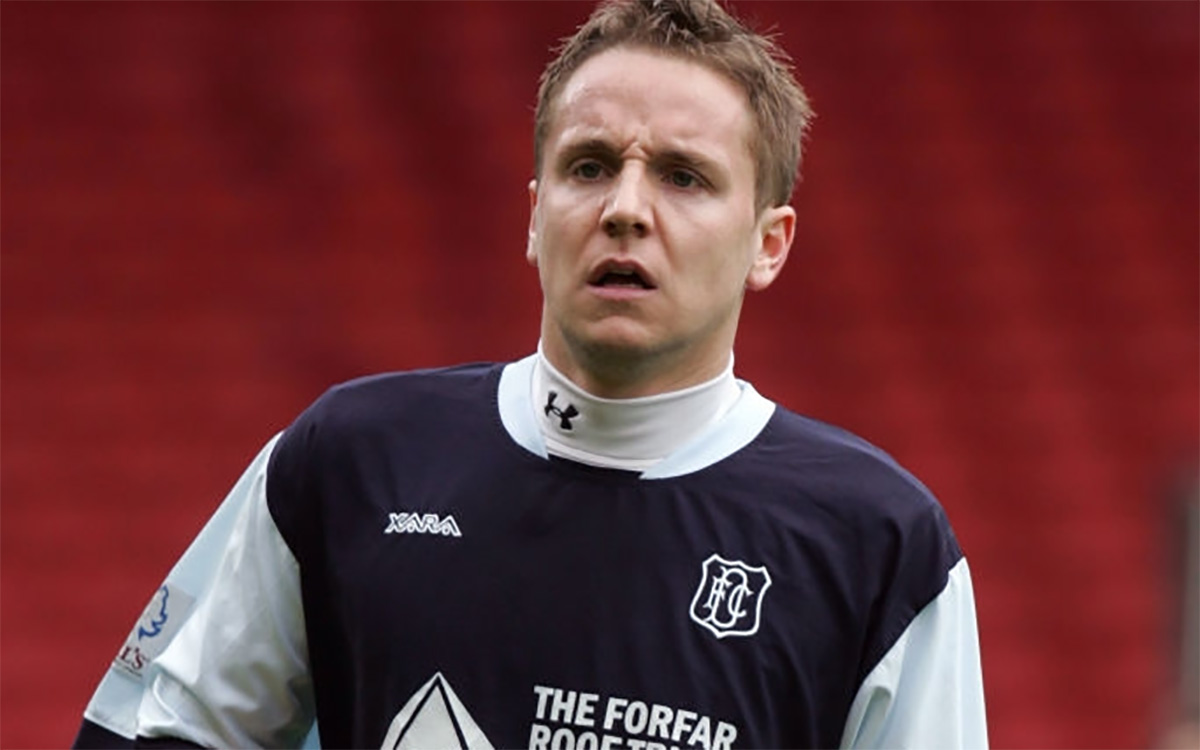 As Dundee face Hibernian in the Ladbrokes Premiership on Friday, we take a look at a player who played for both clubs, striker Tam McManus.

Thomas Kelly McManus was born on February 28th 1981 and started his career with Hibernian, making over 100 league appearances for the Edinburgh club. During his time at there, he won 14 caps for the Scotland Under 21s and played for the Scotland Future team but after leaving Easter Road had a nomadic career, including two spells in both the United States and Ireland.

McManus grew up in Balornock and Bishopbriggs in the north of Glasgow and made his Hibs debut against Stranraer in the First Division as a second half sub for Tom Smith in May 1999. He made his first start in an Edinburgh derby against Heart of Midlothian a year later having earlier gained first team experience with loan spells at East Fife and then Airdrieonians.

McManus went on to become a first-team regular for Hibs, enjoying his best season in 2002/03, when he scored 11 goals to finish top goalscorer and in total would score 23 goals in 128 appearances (58 as sub) in seven years in Leith

In August 2004, new Hibernian manager Tony Mowbray decided McManus would not feature in Hibs’ first team plans, despite starting the Intertoto Cup tie against KK Vetra of Lithuania in July and he was loaned to Boston United. McManus failed to settle in Lincolnshire and returned north to sign for Dundee in January 2005 after 2 goals in 12 appearances for The Pilgrims.

McManus made his Dark Blue debut at home to Inverness Caledonian Thistle on January 15th and it was a dream start to his Dundee career when he scored in the 3-1 win over the Highlanders.

Two weeks later he further endeared himself to the Dark Blue support when he was on target at Tannadice in a 2-2 derby draw against Dundee United.

His next goal was in a 1-1 draw with Aberdeen at Pittodrie in March but after victories over Kilmarnock and Dunfermline in the next two games, failed to win another game before the end of the season which saw The Dee slide deep into relegation trouble.

The final game of the season at Almondvale was a do-or-die, winner-takes-all relegation shoot-out with Livingston where a draw would keep The Lions up. It started well for The Dee when Calum McDonald gave Dundee the lead on 18 minutes but six minutes later Craig Easton levelled for Livi when he headed home a cross from the controversial. Hassan Kachoul who had signed after the transfer window had closed as an amateur but with ‘employment’ in the Livingston commercial department.

With Dundee needing a draw to stay up the Dark Blues threw everything at Livi and in the dying seconds McManus hit the post with a shot from the edge of the box. The final whistle relegated Dundee moments later and Tam slumping to the turf in tears is one of the enduring images of a pivotal day in the club’s history.

McManus stayed at Dens for a tilt at the First Division title and it started well when he scored in the first league game of the season; a 3-2 home win over St Mirren. However a disappointing and turbulent campaign where manager Jim Duffy was sacked before the end of August and then replacement Alan Kernaghan sacked in April, saw Dundee finish sixth; their worst placing since the Second World War.

The popular McManus had scored six goals in 31 appearances but failure to get promotion at the first attempt meant cost cutting at Dens and Tam was of the players to leave in the summer.

In August 2006 Tam joined Falkirk but after playing a largely peripheral role in the first half of the season was released by The Bairns in January. Four weeks later, McManus signed a short-term contract with Dunfermline for the remainder of the season and scored the first of two goals in six games at home to Dundee United.

In June, he signed a two-year deal at East End Park despite interest from at least three other SPL clubs and appeared as a substitute in the UEFA Cup against BK Häcken of Sweden in August.

In March 2008, McManus was approached by MLS side Colorado Rapids and offered a trial while the club were playing friendlies in England. McManus played 45 minutes against Ipswich Town in a pre-season game for the American side and after over a week of extensive medicals, McManus eventually signed for the MLS outfit at the end of the month.

McManus made his Colorado Rapids debut on April 12th, coming on as a half time substitute in the game against New England Revolution. He scored his first Rapids goal in a 2–1 loss to Chicago Fire on April 26th and won the Week Nine Sierra Mist Goal of the Week award for his 40-yard strike against Chivas USA in May.

Tam was released by the Colorado after refusing to accept a cut in wages and in March 2009 joined League of Ireland side Derry City. He was signing a second time for Stephen Kenny who had been his manager at Dunferline and scored his first goal for Derry in July, in their 1-1 Europa League Second Qualifying Round first leg draw away to Latvian side Skonto Riga. He left Derry City after 8 goals in 22 appearances and returned to Scotland as a free agent due to an illegal contract scandal whereby Derry City were found to be paying salaries more than the 65% of turnover stipulated by the League rules.

McManus trained with Ayr United during December 2009 then went on trial with Grimsby Town for a week, but left after the trial period ended and subsequently signed for Ayr until the end of the 2009/10 season. He scored on his debut in a 2–1 defeat to Dundee in the fifth round of the Scottish Cup, but left the Somerset Park at the end of the season after 6 goals in 18 appearances

McManus signed a short-term contract with Falkirk, one of his former clubs, in September and scored two goals on his second debut for Falkirk in a 3–1 win against Queen of the South. Despite hitting 7 goals in 11 league starts, McManus was unable to agree to new terms and left the club, returning to Ayr United on a short-term contract in November.

On February 6th 2012 the Rochester Rhinos of USL Pro announced the signing of McManus and after a year in New York went back to the League of Ireland to join Limerick and hung up his well travelled boots at the end of the season.

However in June 2015, McManus came out of retirement to sign for newly formed Gartcairn Juniors in the SJFA Central District League Second Division but a hamstring injury ended his playing career for a second time in February 2016.

Nowadays McManus is a regular live match reporter on BBC Radio Scotland Open All Mics show on Sportsound and has also moved into football journalism, writing regularly about Scottish football for The Herald newspaper.

With such a varied and interesting career it is perhaps not surprising that Tam has started after dinner speaking and we look forward to hearing him tell his stories as guest speaker at this years Dundee FC Player of the Year Dinner in May.