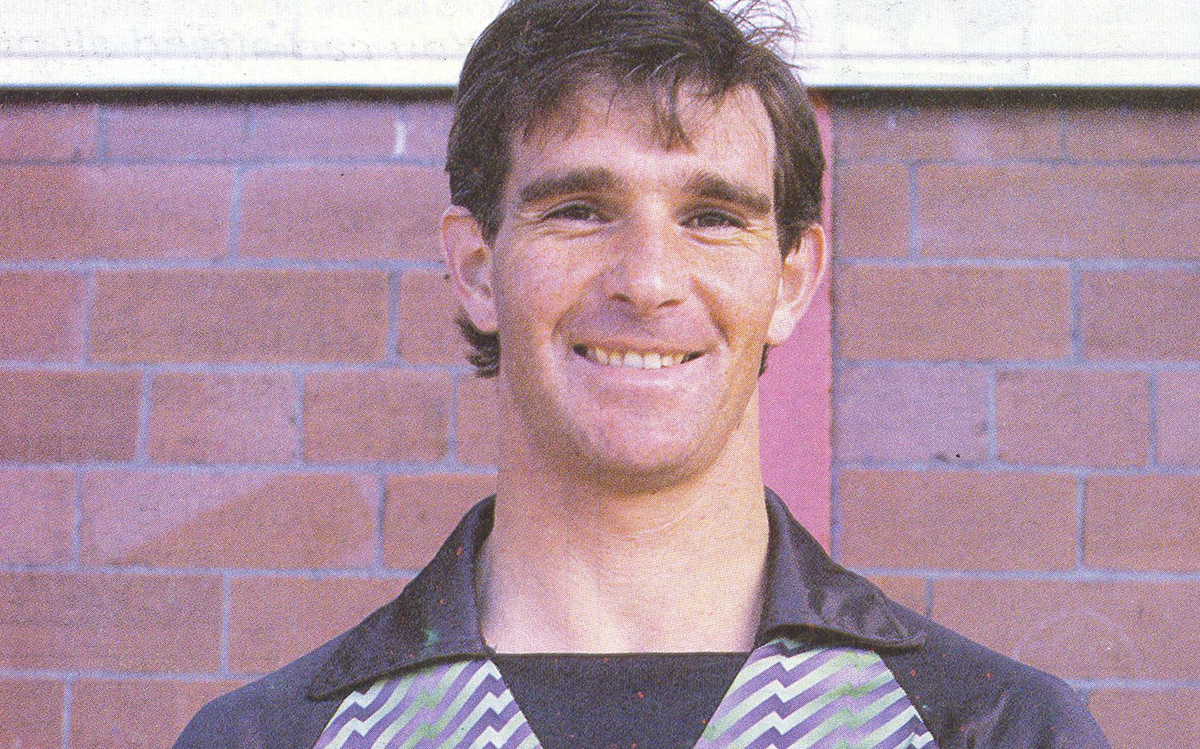 Dundee travel to Ayrshire to take on Kilmarnock at Rugby Park and so we take a look at player who has played for both and on the coaching staff at Dens, Bobby Geddes.

Bobby Geddes is a member of Neil McCann’s backroom team as goalkeeping coach and he is a man who knows Dens Park well, having served the club with distinction as a player for eleven years and played in a national Cup Final.

Born of the ‘Glorious Twelfth’ in 1960, Robert (Bobby) Geddes joined the Dark Blues in 1979 and made his debut that year on September 11th in the Anglo-Scottish Cup second round tie against Sheffield United.

In goal for the first leg in Sheffield had in fact been Dundee’s regular keeper Ally Donaldson and when the popular thirty-six year old retired at the end of a season in which Dundee were relegated, it gave Geddes his big chance at the start of the following campaign in the First Division.

Geddes soon established himself in the Dundee goal and by October had been an ever present in the team as he lined up at Dens against Aberdeen in the League Cup quarter-final.

Dundee faced a formidable Aberdeen side which had become Scottish League Champions for the first time under Alex Ferguson the previous season but undaunted, Geddes went on to complete a clean sheet double as Dundee recorded a memorable 1-0 win in the second leg at Pittodrie after drawing the first leg 0-0.

Dundee then beat fellow First Division side Ayr United in the semis while Dundee United knocked Celtic out in the other tie and the Scottish League sensibly decided that the Final should be played in the city with the venue being Dens on the toss of a coin.

The official match programme for the Final featured a caricature picture of the goalkeepers from both clubs on the cover so Geddes appeared on the front holding the trophy with United keeper Hamish MacAlpine but there was to be no happy ending for Rab. The Dee went down 3-0 to their neighbours and Geddes collected the first medal of his career in the shape of a runners-up one but he was considered to be one of Dundee’s few successes on a disappointing day.

Two weeks after the Final, Geddes’ season was over when a clash with Rae of Hibs resulted in severe ligament damage. A fifteenth second diving header from Eric Sinclair proved to be the winner against the The Dee’s promotion rivals but the points were only collected thanks to a brave display from Geddes.

After the collision, Bobby played on with a heavily strapped knee and played the game of his life, culminating with a miraculous save from Craig Patterson just on full time. This came after Geddes had also taken a bad head knock yet continued to play on and he earned a place in the hearts of the Dundee support after such a brave and heroic display.

It was to be his last game of the season in which Dundee clinched promotion back to the Premier Division on the last day of the season at East Stirlingshire but he recovered in time to regain his place between the sticks for the Dark Blues’ return to the top tier for the 1981/82 season.

Geddes was amongst a clutch of youngsters along with Stewart McKimmie, Ray Stephen and Iain Ferguson who impressed in the Premier Division and Geddes made thirty-five league and cup appearances as Dundee retained top flight status by four points.

Geddes was by now a Scottish Under-21 internationalist having made his debut against Sweden in 1981 and earned a total of five caps at this level including one against England in 1988 as an overage player. Throughout his time at Dens Rab was called up to several Scotland squads but was unfortunate not to actually gain any full caps or even a place on the bench.

For the next couple of seasons Bobby vied for the number one spot with Colin Kelly and then returned in goal in October 1983 in time to play in a memorable 1-0 win over Dundee United at Tannadice in November when a Peter Mackie goal gave Dundee their first win over United since October 1979.

The following December Archie Know replaced promotion winning manager Donald McKay as boss and he led Dundee to the Scottish Cup semi-final later that season. Geddes was part of the side which went down 2-0 to Aberdeen at Tynecastle but in Knox’s first pre-season he brought in another keeper in the shape of Tom Carson from Dumbarton and Rab spent the 1984/85 season battling with TC for the number one spot.

Bobby’s record against United was fairly good and many Dundee fans will remember his fantastic save from Eamon Bannon at Tannadice that featured on the opening credits of Sportscene for a considerable time. In total he played in seven victories over United which included the 1987 League Cup quarter-final 2-1 win at Dens in front of a capacity crowd of 19,724.

He was part of the team that reached two cup semi-finals in 1987 and in January 1988 picked up his second medal of his Dundee career when he captained Dundee to victory in the prestigious Tennents’ Sixes competition.

In February 1989 Geddes was awarded for his ten years with the club with a testimonial match against Liverpool and over 9000 fans turned up to honour Bobby and watch a classy Liverpool side win 3-1.

Geddes’ last regular appearance for Dundee came on December 9th 1989 in a 3-3 draw at home to St Mirren and at the end of the season, when Dundee were relegated Rab put in a transfer request after the disappointment of losing his place to Tom Carson.

In an effort to cost cut after relegation twelve players were put up for transfer and the club were only too happy to accept a £70,000 bid for Geddes from Kilmarnock in August 1990 where in 1993 he was part of their promotion winning side back to the Premier Division.

In 2008 however Geddes returned to Dens as goalkeeping coach after a spell as player/manager of Junior side Carnoustie Panmure where he led them to Scottish Junior Cup glory in 2004.

His playing career didn’t come to an end however when he returned to Dens as in April injuries forced the 47-year old Geddes to be named as substitute goalkeeper in the final match of the season against Hamilton.

Geddes would again be on the Dundee bench five times in the 2009/10 season and very nearly had to come on in an ALBA Cup quarter-final tie away at Stirling Albion when Tony Bullock picked up an injury but decided to play on.

Incredibly however, Rab did have to come off the bench in a league match away at Raith Rovers in April when Tony Bullock injured his hamstring. His appearance took place almost thirty years after he played for Dundee in the final of the League Cup and he is not only the oldest player ever to play for Dundee, eclipsing Gordon Smith by ten years but he is the oldest player to play in a competitive match in Scotland.

At 49 years and 256 days, Geddes beats Jim Calder’s Scottish League record who turned out for Peterhead at the age of 46 in 2007 and he beats Davie Irons Scottish Football record who earlier that same season came off the bench in the last minute in the Scottish Cup for Threave Rovers against Whitehill Welfare aged 48 years and 98 days.

In eleven years at Dens as a player Geddes made a total of 312 appearances for The Dee, making the 15th highest number of appearances for the Club to which he added his 313th game 29 years after he left. He kept a total of 97 clean sheets for the Dark Blues, the Club’s fourth highest total which is an impressive average of one clean sheet every 3.2 games.

Bobby Geddes claims to have saved eight out of eight penalties for Dundee in one season and is a genuine hero to the Dark Blue support. He is fondly remembered as a Dundee goalkeeping great and was inducted into the club’s Hall of Fame in 2016 with a Special Recognition Award. Rab now passes on his experience and knowledge to the current number ones and the likes of Scott Bain can only benefit hugely from that.