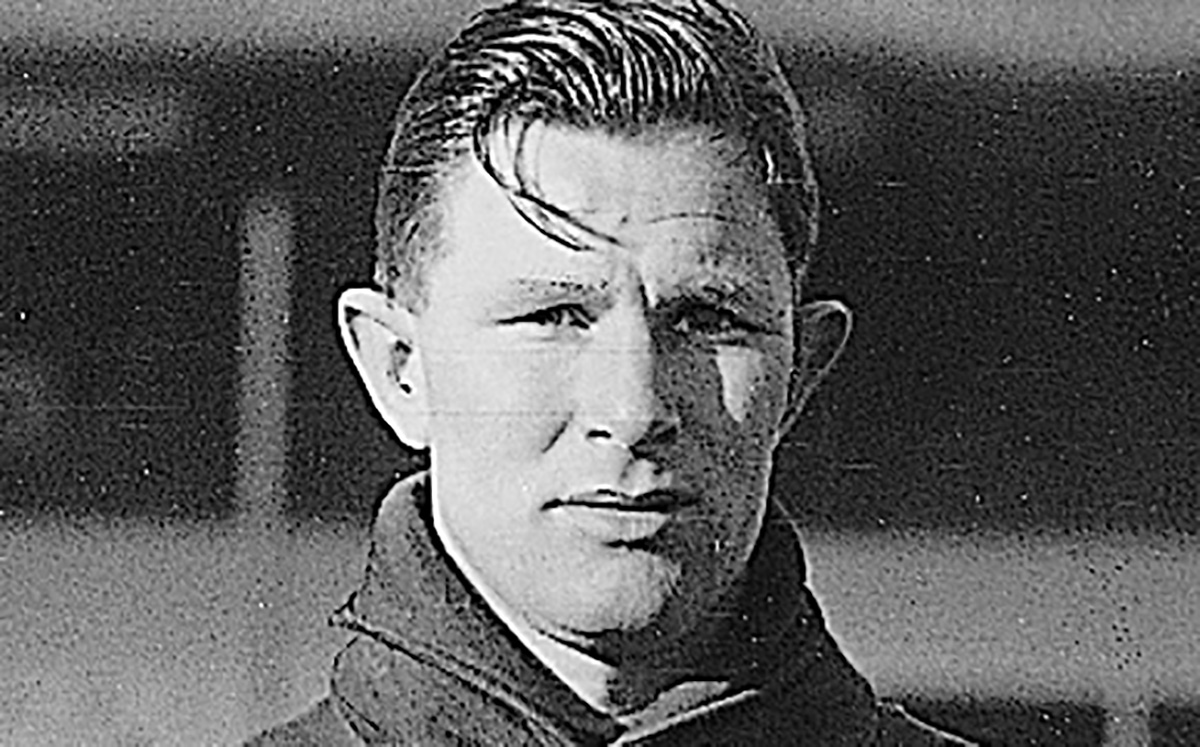 Dundee travel to Lanarkshire this weekend to take on Hamilton Academical at the SuperSeal Stadium and so we take a look at goalscorer who played for both clubs, Alex Stott.

Alexander G. Stott was a formidable centre-forward with Dundee and finished not only as Dundee’s top goalscorer in season 1948/49 but also as Scotland’s top scorer with thirty-nine goals but he is unfortunately remembered for just one failure at the height of a great period of personal success.

Signed from Portsmouth in the summer of 1947, Stott made just one appearance in season 1947/48 in a 5-1 League Cup defeat away to Third Lanark in which he scored Dundee’s consolation but the following year more than made up for it with his thirty-nine goals in just thirty-three games.

By the last day of the season, with his twenty-nine goals in the league, he had done more than any other Dundee player to take The Dee to the brink of their first ever Scottish League Championship and on April 30th, 1949, the Dark Blues just needed a win in a fairly straightforward match at Falkirk, with their nearest challengers Rangers also away at Albion Rovers.

However in an excess of zeal, the ebullient Dundee manager, George Anderson locked his players in the dressing-room for an hour before kick-off and by the players own post match admissions, it reduced them to a bag of nerves which saw the opening period a cagey affair in front of 17, 000 sun-drenched fans at Brockville.

After a spell of Falkirk pressure, Dundee looked as if they had got the vital breakthrough three minutes before the break when they were awarded a penalty after George Hill was brought down. The normally deadly Stott stepped forward to take the kick and directed the shot towards the bottom right hand corner but unfortunately saw George Nicol in The Bairns’ goal pull off a fantastic save to turn it round the post. Stott had not made a clean contact but the shot was well directed and from the resultant corner, the Falkirk keeper made another outstanding save from a net-bound Syd Gerrie header.

The interval did little to settle Dundee’s nerves and in the second half, more Falkirk pressure paid off with two goals in an eight minute spell. With twelve minutes remaining, Stott pulled one back for his thirty-ninth goal in all competitions but any hopes of a revival were quickly dashed by another two Falkirk goals to seal a 4-1 home win.

Rangers won by the same score at Cliftonhill and all with Dundee connections were devastated. The penalty miss had come at a crucial time but overall the Dark Blues had failed to show any of the flair they had shown all year against a stuffy Bairns’ defence.

It was a season of triple heartache for The Dee with two semi-final defeats in both cup competitions when hopes had also been high of a cup win. In the League Cup, Stott got three goals in the earlier rounds before Dundee crashed 4-1 to Rangers in controversial circumstances at Hampden when The Light Blues won the toss, chose ends and then also kicked off!

In the Scottish Cup, Dundee met Clyde at Easter Road in the semis and after an exciting 2-2 draw, in which Stott scored a penalty, The Dee crashed out 2-1 in the replay at Hampden to give The Bully Wee revenge for their Cup Final defeat in 1910.

In the first round, Stott scored four against St Johnstone in a 6-1 home win and this is a joint club record for most goals scored by a Dundee player in a Scottish Cup tie, shared with George Merchant and John Duncan.

Stott had scored another hat-trick the week before in the league at home to Morton while he also scored four earlier in the season against Albion Rovers in Coatbridge.

His first double of the season was at home to Clyde on Christmas Day and on January 2nd, he was the hero again with another brace against Rangers in a 3-1 win. That victory sent Dundee to the top of the league and they stayed until the last day defeat at Brockville.

The match against the top two on the bank holiday was widely anticipated and a new Dens Park record crowd of 39, 975 were in attendance. As kick off approached, the turnstiles were closed one by one and with thousands still milling about outside, scores of fans clambered over the walls while hundreds more climbed onto the roof of the TC Keay, Densfield and Bowbridge Works adjacent to the ground.

At the foot of Provost Road, the pressure of the crowd burst open the big iron gates and around 2000 swept past the police and it was estimated that around 45,000 were actually inside Dens with another 5,000 fans outside.

Stott’s Dundee career never really recovered from that penalty miss in April however and after just four appearances – and three goals – in the League Cup at the start of the following campaign, he was sold to Partick Thistle for the considerable sum of £6,000.

At Firhill, he scored seventy-six goals in the next four seasons for a Thistle side who knew how to lose attractively but who could occasionally be devastating and in January 1954 Alex transferred to Hamilton, where he finished his career.

In his one full, regular season at Dens, Stott finished as both Scotland’s top flight, top goalscorer with thirty goals in the Scottish League A Division and as top marksman in all competitions with thirty-nine strikes and he shares that distinction with just four more Dark Blue men, namely 1910 Scottish Cup hero ‘Sailor’ Hunter (1908/09), Dave Halliday (1923/24), Alan Gilzean (1961/62 & 1963/64) and Tommy Coyne (1987/88).

His goals to games ratio (1.13 per game) is one of the best in the Club’s history as he made his name as a Dark Blue Destroyer with the nearly men of Dundee’s history.