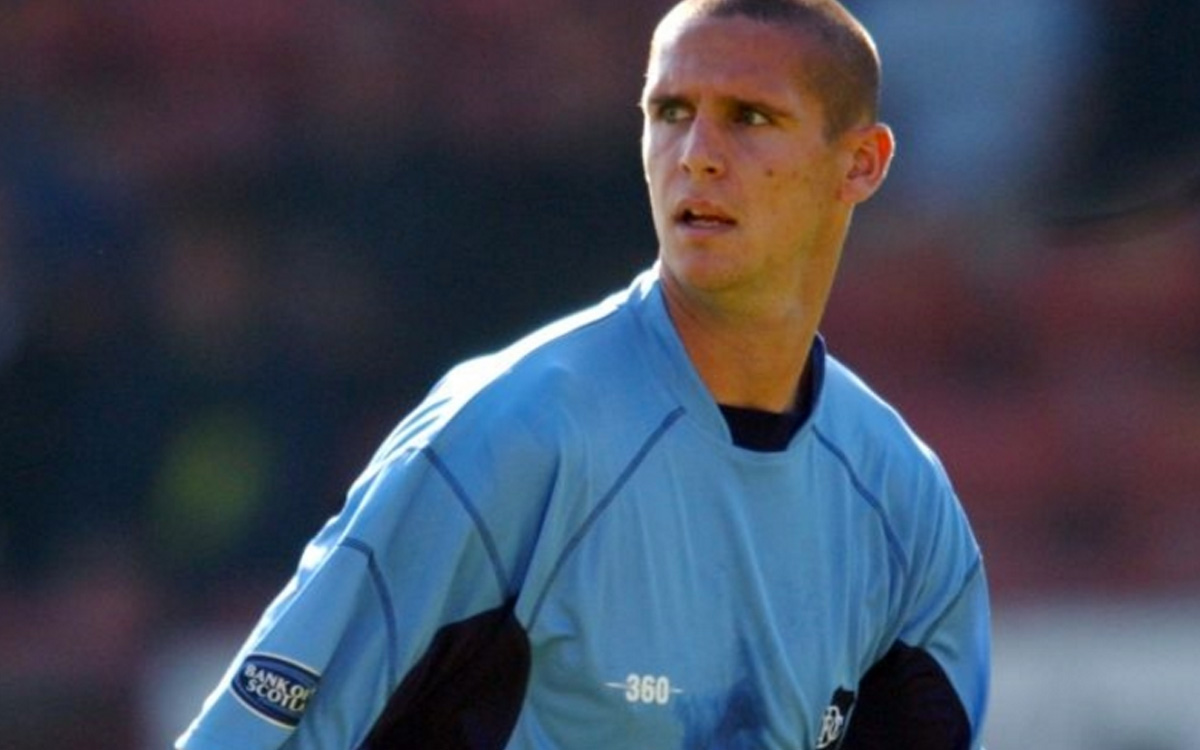 With Dundee facing Dundee United in the Betfred Cup this evening, we look at a player who played for both clubs, Lee Wilkie.

When Alan Gilzean scored the winning goal for Scotland against England at Hampden in April 1964 it seemed unlikely that it would be almost 40 years until a Dundee player scored for the national side but Dundee fans had to wait until 2003 until they saw one of their heroes score again for Scotland. That player was defender Lee Wilkie who scored the winner against Iceland at Hampden in March 2003 and in total Wilkie would win 11 full caps for Scotland. He is the fourth most capped player for Scotland in Dundee’s history as well as winning a B cap and 8 Under-21 caps all as a Dundee player.

Lee Wilkie came through the youth ranks at Dens, signing a professional contract on September 8th 1998 and made his first team debut a year later. After an indifferent start to the 1999/2000 season, manager Jocky Scott reverted to a 3-5-2 system in an attempt to plug the gaps at the back and brought in the 6ft 4in Wilkie for his debut against Celtic at Dens on August 21st.

The towering central defender did well against the formidable Mark Viduka and did well enough to retain his place in the side despite the 2-1 defeat after losing a last minute Henrik Larsson goal. A few weeks later Wilkie was unlucky to get his marching orders for a couple of heavy tackles against Rangers and after he returned from his one game suspension was sent off against Hibernian at Easter Road for a rash tackle on Russell Latapy.

This didn’t deter Scotland Under-21 manager Alex Smith calling the nineteen year old into his squad alongside Gavin Rae and Jamie Langfield and he made his international debut away Estonia Under-21s on September 7th in a European Championship qualifier.

In his debut season, Wilkie made six appearances for the Under-21s and 27 for The Dee including the 3-0 home win over Dundee United at the end of the season but it was all change in the summer as Jocky Scott was replaced by Ivano Bonetti.

Bonetti brought in a host of foreign stars including Caniggia, Nemsadze, Cabellero and Sara but he vowed to blend them with the best of his Scottish talent and extended the contracts of Wilkie and Rae until 2003.

Wilkie scored his first goal for the club against Montrose in the League Cup on August 23rd but in the next round was sent off for two bookings against St Mirren as The Dee crashed out 3-0 in Paisley.

Another red card against Kilmarnock at Dens in October and a bizarre own goal in Perth when a cross skidded off him, hit keeper Marco Rocatti and back off Wilkie into the net frustrated the Italian manager and when the pair had a training ground bust up, Lee’s future at Dens was in jeopardy.

‘Chopper’, as he was nicknamed by the fans, was made to train with the Under-21s and although a “clear-the-air” chat saw him back on the bench at Easter Road on January 2nd, he was loaned out to Plymouth Argyle to allow clubs like Everton, Sheffield Wednesday and Preston North End monitor the form of the £1 million rated defender.

No offers were forthcoming however and Wilkie returned to the side for the last game of the season against Hearts at Tynecastle.

Wilkie started the two games against Sartid in the UEFA Intertoto Cup in June 2001 but any thoughts of an end to his ongoing feud with Bonetti were dashed when he was shipped off on loan to Notts County under former manager Jocky Scott and then First Division Falkirk where he played against Dundee in the Scottish Cup.

Dundee now dropped their valuation of Wilkie to £350,000 and although former Dundee boss Jim Duffy was interested in taking him to Portsmouth, Pompey couldn’t afford the fee.

The Dundee defence were leaking goals however with Del Rio and Fan Zhiyi failing to make an impact and after Bonetti mused in the press that Dundee lacked height in defence and were conceding too many goals from crosses, he recalled Wilkie to the side in March.

Lee brought some much needed solidarity to the defence and his return was a key factor in Dundee getting four wins and a draw from their last eight games. His form had not gone unnoticed by new Scotland boss Berti Vogts and along with Gavin Rae was selected for a Scotland XI against Dundee United.

The big centre-half did enough to merit inclusion in Scotland’s squad for the summer tour of the Far East. He played in both Reunification Cup matches as a half-time substitute against South Africa and then from the start against Hong Kong in a 4-0 win.

Before departing for Asia Lee went to the Andrew De Vries Memorial Trophy presentation to accept the Player of the Year Award on behalf of Temuri Ketsbaia and was asked on stage if he fancied his chances of winning it the following year. Lee claimed that of course he would but no one in the room thought he actually would but he proved the doubters wrong and did exactly that.

Bonetti was gone and under new boss Jim Duffy, Wilkie became a key player as Dundee went in a fourteen match unbeaten run, reached the Scottish Cup Final and qualified for Europe for the first time in 29 years.

Wilkie missed the Cup Final in May after picking up his second booking of the competition in the semi-final against Inverness but was back in the heart of the defence at the start of the following season, scoring on the opening day at Motherwell. When the UEFA Cup campaign kicked off in August. Lee played in all four games against Vllaznia and Perugia and in the home leg against the Italian side was on the scoresheet when he soared high to head Dundee back onto level terms.

He earned a Scotland ‘Future’ cap against Germany in October 2003 and continued to chalk up the full Scotland caps, including scoring that vital Euro qualifier against Iceland and he part of the side to beat the Netherlands 1-0 at Hampden in the first leg of the Euro 2004 play-off. However three days later the Scots were mauled 6-0 by the Dutch as Lee picked up his 11th and final cap and when he returned home from Amsterdam was met with the news that Dundee had plunged into administration.

Lee was one of the lucky ones who kept his job but personal tragedy was just around the corner when he had to go off injured during the first half of the famous derby win on January 25th 2004. It had been hoped that rest and physiotherapy would lead to a full recovery to his knee injury but a recurrence of the injury at training resulted in surgery to his cruciate ligament.

It would January 2005 until Lee returned to the side and by then the Dark Blues were embroiled in a relegation battle. His return was a boost to the side and they started to edge towards safety but on April 9th he was stretchered off again with a recurrence to the knee injury which would leave him without the ligament. His absence would be keenly felt and Dundee would fail to win another game and on the last day of the season would be relegated to the First Division.

Lee worked hard to continue his football career and would make a scoring return to the side in March 2006 against Hamilton as a half-time substitute and five days later put in a man of the match performance against the same opposition in the Scottish Cup quarter-final for Alan Kernaghan’s side.

It was a false dawn however as Lee was stretchered off after 15 minutes against St Johnstone on March 18th meaning he would miss the Scottish Cup semi against Gretna and with concerns his career might be over was allowed to leave in the summer after turning down a significant pay cut after Dundee failed to return to the SPL at the first time of asking.

However three months later Craig Levein offered Wilkie to the chance to resurrect his career with a ‘pay-as-you-play’ deal at Tannadice and after being allowed to get match fitness in a one month loan with Ross County would make 94 appearances for United over the next four years, including as captain in the 2008 League Cup Final.

However in 2010 knee injury plagued him again and in April announced his retirement after just two appearances that season.

After hanging up his boots, Wilkie joined Premier Sports Management as a client manager and became assistant manager of Montrose in the summer of 2012 but left the following May because of family and other work commitments.

Wilkie was a popular player with the Dundee support, wearing his heart on his sleeve and giving his all every time he pulled on the dark blue (and playing in four derby wins) and if he had not been so unlucky with his knee injuries, he could have easily added to his international caps.