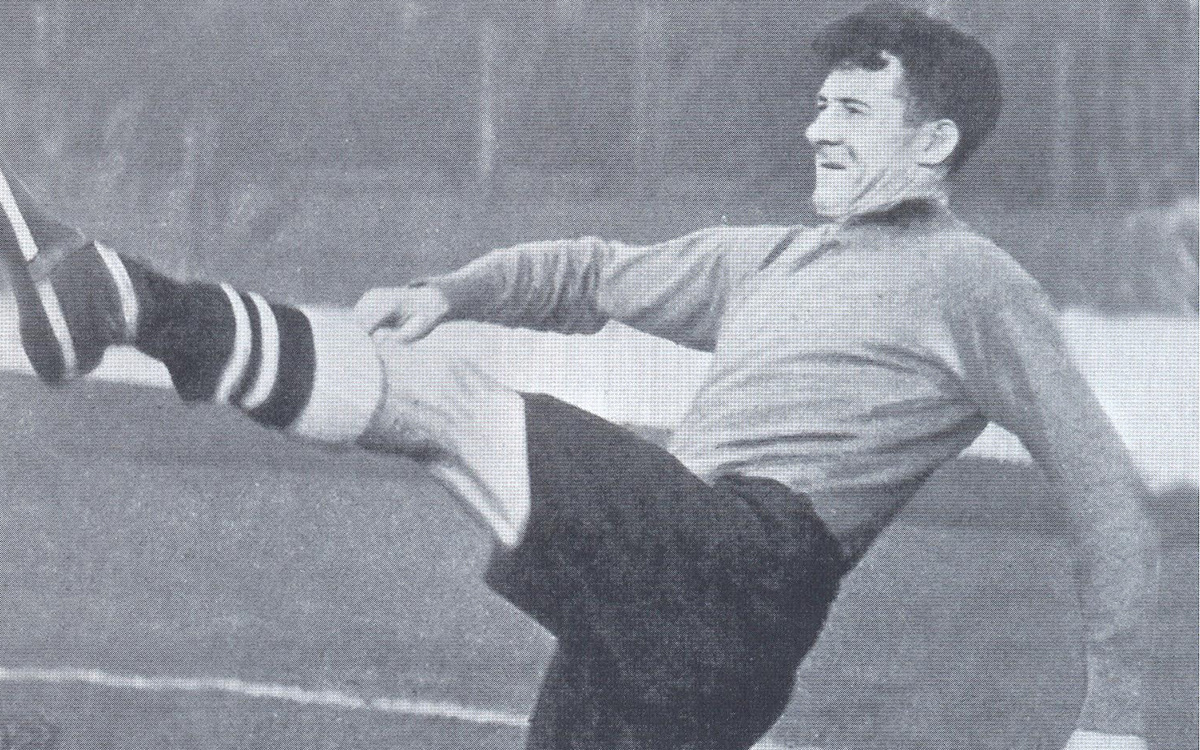 Dundee face Dundee United in the Betfred Cup at Dens on Sunday and so we take a look at one of the myriad of players to have played for both city clubs, Jock Gilmour.

Gilmour is a stalwart of Dundee FC making 369 appearances for the Club in 13 seasons including the 1925 Scottish Cup Final and his consistent performances earned him calls up to both the full National and Scottish League sides and he sits 11th on Dundee’s all-time appearance record.

John Rooney Gilmore was born in Bellshill, Lanarkshire on June 15th 1901 and started his football career with Scottish League Division Two side Bathgate FC and joined the Dark Blues in the summer of 1923.

A 5ft 11in left-back, Gilmour made his first appearance for The Dee on September 8th 1923 in a 1-0 home win over Third Lanark and made 16 appearances in his debut year, competing with Napper Thomson for the left-back shirt.

Gilmour played in the first ever top flight derby at Dens when a Davie McLean goal was enough to secure a 1- win in front of 20,000.

Jock continued to vie with Scotland international Thomson in the 1924/25 season and also deputised at right-back in the absence of captain Jock Ross. In March Gilmour was called into the side at outside-left to cover for injured veteran Jock McDonald and scored his first goal for the Club in a 1-0 win over Queens Park at Hampden in his first game on the wing.

By then Dundee had reached the Scottish Cup semi-final and Gilmour played in the two games it took to overcome Hamilton Academical and book a place in the final. With McDonald still injured it meant a return to Hampden on the wing for Gilmour and he lined up against Celtic in the Scottish Cup Final on April 11th 1925.

Although Celtic were the favourites it was Dundee who started the brightest and took the lead on the half hour through formidable forward Davie McLean. Gilmour had a hand in the goal when he headed the ball against the bar and McLean rushed in between two Celtic defenders to score.

The second half was a different story as Dundee adopted a negative approach leaving only Halliday, Duncan and Gilmour up field for long spells and inevitably Celtic equalised with an incredible solo goal from Patsy Gallacher – father of Dundee legend Tommy. Jimmy McGrory headed home a second with just three minutes remaining and it was all over for Dundee with the Cup heading to the east end of Glasgow and the 23 year old Gilmour heading home with a runners-up medal.

Gilmour and Thomson batted the left-back spot back and forth for the next couple of years but when Napper, who himself made 384 appearances for The Dee was placed on the transfer list by manager Alec McNair after a re-signing dispute, Jock was able to make the position his own. While Gilmour would miss just four matches of the 1927/28, Thomson would hang up his boots after his continued dispute over wages and his acrimonious departure marked a sad end to a great career.

A fast and clever full-back, Gilmour however went from strength to strength and could add a goal or two to his hard tackling style. He became the regular penalty taker from 1927 onwards, taking over the duties from Thomson and scored 10 times from 12 yards.

Gilmour also scored on his international debut for the Scottish League on October 8th 1930. Jock was rewarded for his consistent Dark Blue performances with a Scottish League cap against the Irish League in front of 10,000 at Celtic Park and scored the fifth in a 5-0 win.

Jock had already travelled as reserve with the full squad to France in May as the Scots won 2-0 in the Stade de Colombes (the stadium for the 1924 Paris Olympics) thanks to two goals from Hugh Gallacher. He impressed the Scottish selectors in the stand for the Scottish League game and three weeks later was given his full international debut alongside Dundee team mate Colin McNab in a 1-1 draw with Wales in a British International Championship match at Ibrox.

A draw with Wales was considered a disappointment for Scotland and Gilmour was amongst three of the side who were never capped again.

He continued to turn in solid performances for Dundee however until the 1935/36 season when the 34 year started to get used sparingly and was granted a free transfer briefly turning out for Yeovil and Petters United before retiring.

That wasn’t the end of his footballing story however as two years later he came out of retirement to play for Dundee United in a Scottish Cup tie against Hearts in 1938 before finally hanging up his boots.

Gilmour died on February 26th 1963 and as a loyal servant to Dundee FC left behind a legacy of 333 league appearances and 36 Scottish Cup appearances between 1923 and 1936.

Jock also took part Dundee’s 1924 Tour in Spain, the second summer in a row that the Dark Blues travelled to the Penisular and scored a penalty against Deportivo La Coruna. He was part of the team that beat Barcelona twice and Real Madrid and become the first side from outside Spain to beat both Real and Barça on their own grounds.

Considering he only made 57 appearances in his first 4 season and six in his last, if he hadn’t been competing with the likes of Napper Thomson, Jock Ross and Finlay Brown for a full back spot, he could have quite easily beaten Dundee’s all time appearance record.