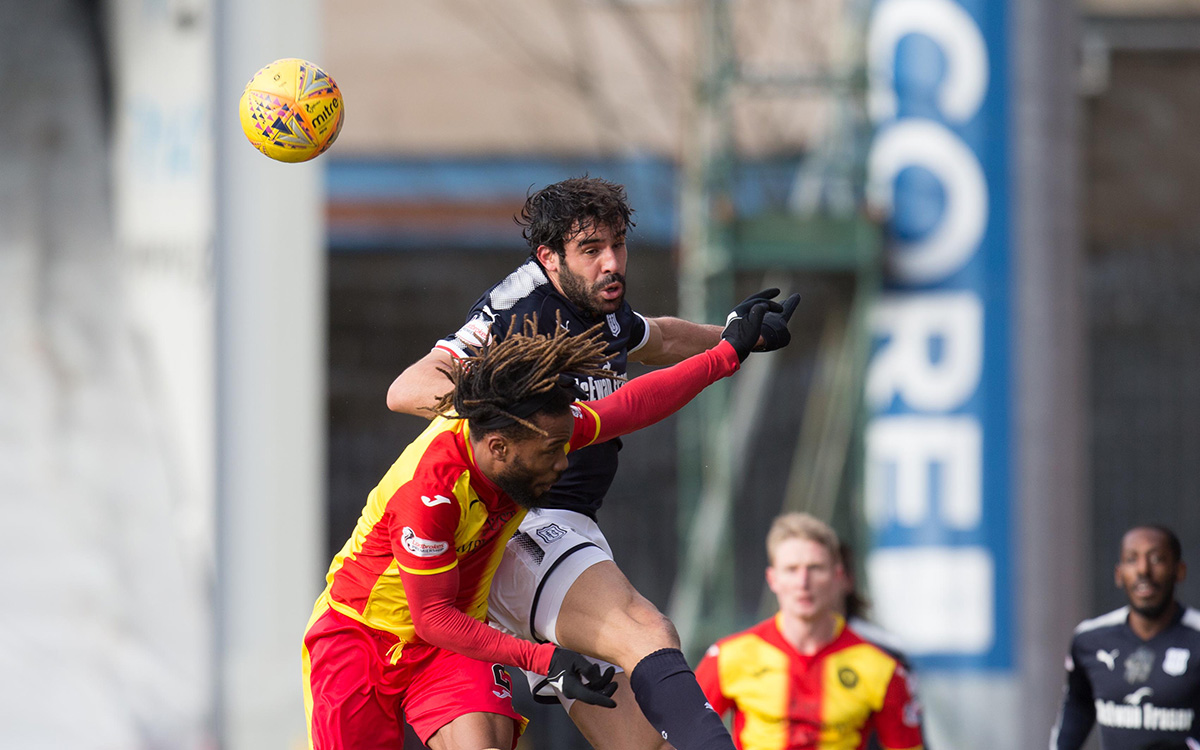 Dundee take on Partick Thistle in the final Ladbrokes Premiership game of the season and here we round up everything you need to know ahead of the match.

Simon Murray’s first goals in dark blue gave the Dee a massively important 2-1 win over Partick Thistle in a tense battle at Firhill last February With seven minutes left to play a Dundee win was an unlikely dream but Murray’s two late goals thrilled the healthy travelling support. Connor Sammon had given the Jags a deserved half time lead, but the home side couldn’t hold out when the Dark Blues turned the screw late on.

Partick’s opened their season with a 1-1 draw in the Betfred Cup and despite losing the bonus point, recovered to qualify from their section with wins against St Mirren, Airdrie and Stranraer, with the 5-0 home with over The Buddies looking particularly impressive.

An excellent 3-0 win in Perth in the second round set up a quarter-final tie with Rangers and after the match to extra time with an injury time equaliser, their Glasgow neighbours finally progressed with a 3-1 win.

Partick couldn’t replicate their League Cup form in the Premiership and sit bottom with just three points from three draws with Ross County, Rangers and Hearts. The Jags’ league campaign started with a 3-1 defeat to newly promoted Hibernian at Easter Road and it took them until September to pick up their first points.

Draws at Firhill against Hearts and Rangers were followed up with defeats to Motherwell and Kilmarnock but took seven points from nine at the end of October with wins over Dundee and St Johnstone and a draw with Hamilton.

However the next four games saw just a point picked up in a draw with Hearts at Murrayfield before managing to pick up all three points with a 3-2 win over Motherwell despite a late comeback from The Steelmen at 3-0 down.

Before the winter break Partick went on a consecutive win/lose run with defeats to Dundee, Celtic and Aberdeen but crucially wins over Hamilton and Ross County kept them off the basement.

In the Scottish Cup Thistle defeated Queen of the South 2-1 in Dumfries before bowing out 3-2 in the next round at Celtic Park.

When the Premiership returned defeats to the Old Firm were countered with a win in Perth and a draw with Motherwell to keep in touch with the sides just above them in the table.

However back to back defeats to Dundee and Hamilton sent Thistle to the bottom and since then have yo-yoed between 11th and 12th.

Four defeats in a row to Hibs, Hearts, Ross County and Kilmarnock were damaging but since the split a win against Hamilton and draws with St Johnstone and Kilmarnock have lifted them off the bottom and given Partick hopes of survival. However defeat to Motherwell in midweek means Partick remain in the play-off spot and may need something at Dens to survive.

Tickets for the match against Partick Thistle at Dens Park are on sale now online and from the Ticket office.

Dundee’s 2017/18 match programme The Dee will be available to buy at the Partick game in and around the ground and in the club shop. It is a full, colour 52 page edition packed with news, views, features and exclusive interviews which this week include:

Fans from outside of the UK who are virtual season tickets will be able to watch the Partick Thistle match live on DEETV or alternatively they can view it for just £5.

You can sign up for DEETV for just £5 a month on the official website where you will have access to Highlights, Interviews and all the Dundee FC goals at the click of the button.=