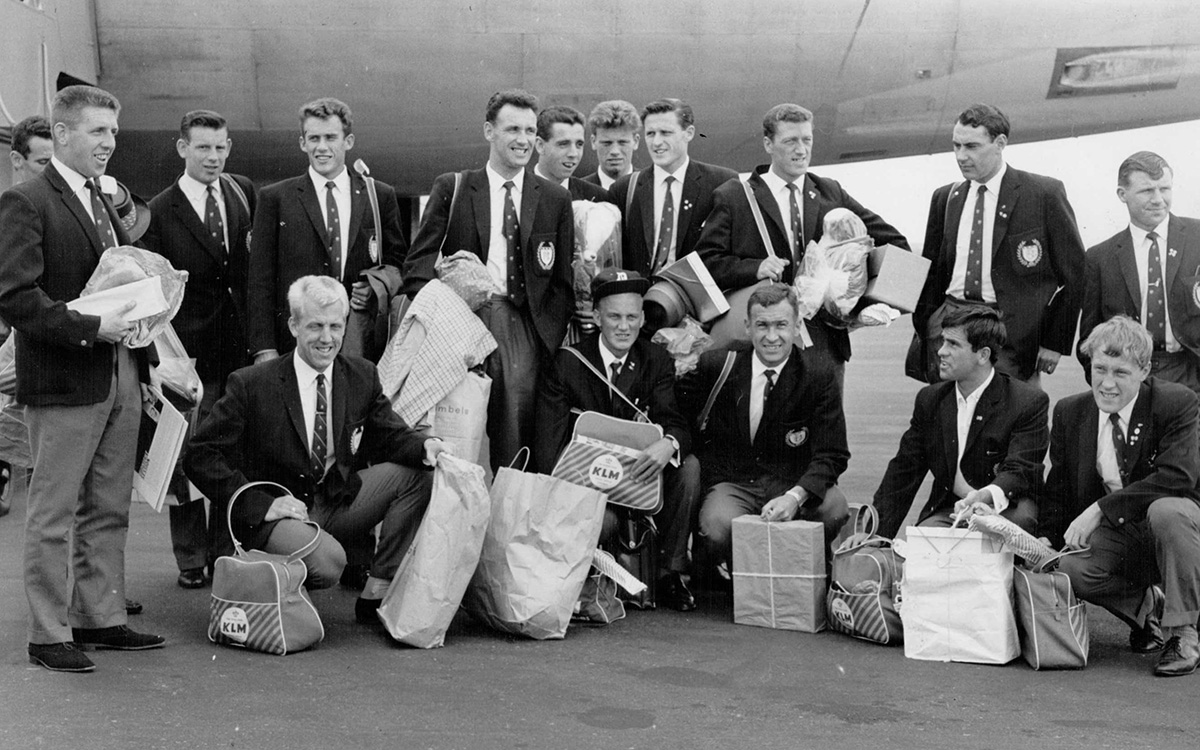 When Dundee FC won the Scottish League championship trophy in 1962 there was no time for the champions of Scotland to rest on their laurels as just a few weeks later they flew out to the United States on May 18th to take part in the prestigious New York International Soccer Tourney.

Having won the Scottish League Championship at Muirton on April 28th 1962, there was little chance to bask in the glory as just twenty days later Dundee took a plane ‘across the pond’ to New York City to take part in their annual football tournament. Scotland normally sent over the league runners-up to the competition and with Rangers resurgent in the spring, the Scottish League nominated Dundee as its representative. With Dundee fighting back to win the title on the last day of the season, it was the Champions of Scotland, rather than the runners-up who took part for the first and only time and it caused much consternation at the SFA.

Dundee cared very little however as having had very little experience of foreign opposition, it was seen by manager Bob Shankly as the perfect preparation for the Dark Blues’ European debut in the forthcoming Champions’ Cup campaign. Winning the league had entered The Dee into the seven year old European Cup and the New York Tourney would test The Dee against sides from West Germany, Brazil, Yugoslavia, Mexico and Italy.

Shankly joined his players on the transatlantic flight alongside chairman James Gellatly, vice-chairman Jack Swadel, club secretary Bob Crighton and backroom staff Sammy Kean, Lawrie Smith and Jacky Kay and when the Dundee party arrived at the airport, the incessant heat greeted them, reading 94°F (34.5°C) on the clock tower. It was an ominous sign of things to come.

The players were staying at Hotel Empire on Broadway on 63rd Street and on their first night in the ‘Big Apple’ several of the squad went to watch ‘the fights’ as the New Yorkers call them at the famous St Nicks Arena. Dundee legend Tommy Gallacher, then a journalist with The Courier and reporting on the trip for the paper, had somehow managed to procure some tickets and on the bill that night was arguably the greatest boxer in the history of the sport, Muhammad Ali, then known as Cassius Clay who defeated another heavyweight contender Billy Daniels. Gallacher’s connections didn’t end at getting tickets as he was able to set up a brief meeting with the champ after the bout and it was a tremendous start to the trip.

The tournament saw two groups of six compete against each other on Randall’s Island and the Dark Blues’ first match was on May 20th against West German side Reutlingen. In front of a crowd of 17,500, on a pitch littered with nuts and bolts, Dundee lost 2-0 in tropical temperatures and humidity. The thermometer was now reading 99°F (37°F) and the Dundee coaching staff were constantly throwing bottles of water to the players.

Alan Gilzean remembered that at half-time none of the exhausted players looked forward to going out for the second half and that Gordon Smith, (who would turn thirty-eight five days later), in particular was struggling. “Gordon was knackered”, recalls Gillie, “and said to us that he was going to pack it in after this and we had to persuade him that we were all just as knackered. Even at his age, Gordon was amongst the fittest players in the squad and we all struggled to cope with the heat and humidity in America.”

Following the match Smith was rushed to a nearby hospital suffering from severe dehydration and when he was weighed and he was found to have lost over a stone (16 lbs in total) during the opening game. He vowed to Bob Shankly that he would be on the first plane home in the morning but the Dundee players coaxed him into staying and he was glad that he did when he was visited by an old school friend from his home town of Montrose who now lived in the US a few days later.

The following week saw Dundee training in Central Park and enjoying several trips to Coney Island before a chance to briefly escape the unrelenting heat when they flew to Detroit to play a friendly against another West German side Saarbrucken. They enjoyed the trip to Motor City, staying at the classy Wolverine Hotel but in front of a smallish crowd of 5311 at the 52,416 all-seater Tiger stadium, The Dee crashed 5-1 with Andy Penman scoring the consolation.

It may have been a disappointing result but the Dark Blues learnt much from both games against German opposition in lieu of the fact they would draw the West German champions Cologne in the preliminary round of the Champions’ Cup. Ian Ure remembers that Saarbrucken gave an object lesson in possession football saying, “They had so much touch and skill and would pass the ball about slowly until they reached the edge of the box, where they would tear you apart. The American thing was a real eye opener but it served us well for the European Cup and was one of the best things Bob Shankly ever did.”

While in Detroit, Gordon Smith was interviewed for the Detroit Free Press where he claimed his longevity in the game was helped by the fact he didn’t smoke, drink spirits or coffee and took five hour intervals between meals. He also revealed to his American interviewer that his wages were $75 a week (approximately £27 by 1962 exchange rates), about the same as a doctor or a dentist in the UK and that he was playing football professionally two years before his right-wing partner and room-mate for the trip Andy Penman was born!

Things improved back in New York with heat subsiding a little and a 3-3 draw against Hadjuk Split of Yugoslavia on May 30th (two goals from Gilzean and one from Penman) before a 3-2 win over Guadalajara of Mexico on June 3rd, their first win of the Tourney the goals again scored by Penman and Gilzean with Dundee’s ‘boy genuis’ this time getting the brace.

For both matches Dundee received some unexpected backing from seventy Scots brought down from Canada by ex-Celtic goalkeeper Joe Kennaway and the ex-pats were introduced to Bob Shankly and thanked for their support after the win over Guadalajara.

The game against the Mexicans was Gordon Smith’s last of the Tourney as still suffering from the heat, he was excused by Bob Shankly and flew back home, promising to return should Dundee win their qualifying group.

A return to the US would not be necessary however for after a 1-1 draw with Italians Palermo on June 10th (Bobby Waddell the scorer) and then a 3-2 defeat to eventual Section 1 winners FC America of Brazil on June 16th (Waddell and Gilzean on target), The Dee finished fifth in their group.

FC America went on to defeat Section 2 winners Belenenses of Portugal 3-1 on aggregate, thereby wining the 1962 New York International Tourney without losing a game but they would then lose 3-2 on aggregate to 1961 winners Dukla Prague in a play-off for the American Challenge Cup.

Overall the trip was deemed to be a success with Bobby Wishart claiming that “Dundee were beaten by the blinking heat.” Dundee had spent almost six weeks in the USA and according to Wishart, the trip prepared them for spending time together away from home which would benefit them on the European Cup away legs to come. Wishart shared a room for example with Bobby Seith and the players would retain the same room-mates in Europe.

One player who did not travel was Craig Brown who spent the summer receiving treatment on a knee injury. He received a postcard from Bob Shankly which said: “Sorry you missed the trip Craig”, which was a thoughtful gesture which made Brown feel he was still part of things. In his autobiography, Brown states that as National Team manager he made a point of sending a postcard to any player who missed a Scotland trip through injury and stated: “I learned that from Bob Shankly and I am sure it has gone a long way to helping with the great team spirit we had in the Scotland camp.”

The New York Tourney  was not only a memorable trip for the Dark Blue party but it was also critical in getting prepared for their assault on the European Champions’ Cup which almost took them all the way.