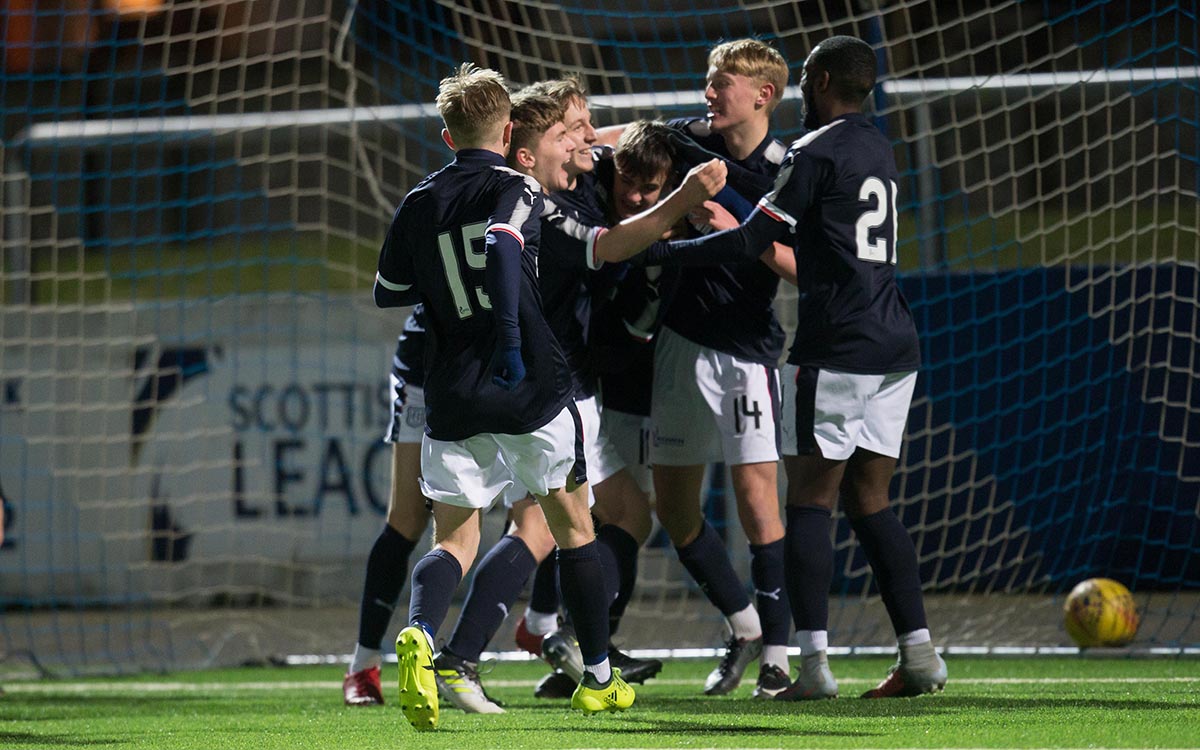 John Smith’s goal in the third minute of injury time earned Dundee a 3-2 win over Development League leader’s Hibs. The result lifts the Dark Blues into second place, just three points of Hibs at the top of the table.

Roarie Deacon featured alongside Genseric Kusunga and Lewis Spence and he had them ahead twice in the match, but goals from Lewis Allan and Gregor Woods injury time header looked to have salvaged Hibs a point until Smith converted Deacon’s cut back.

Dundee came flying out the traps, and look the lead after six minutes when Deacon turned inside the box and fired a low shot past Maciej Dabrowski at the near post.

Deacon went close moments later when a corner fell to him at the edge of the box, but his volley flashed wide.

After a slow start, Hibs began to grow into the game, and equalised when Lewis Allan beat Dundee keeper Jeremy Malherbe to a cross, and headed the ball into the net.

The footballing cliché that you’re most vulnerable when you’ve just scored proved all too real for Hibs as Dundee launched an attack from their kick off, and Deacon curled the ball into the top corner from 15 yards.

Hibs had Dabrowski to thank for keeping them in the game. The goalkeeper denied Deacon, Jack Lambert and Cedwyn Scott before half time.

Dundee started the second half in the driving seat, but were nearly undone when Olly Shaw cut the ball back for Allan, but he shot straight at Malherbe.

Connor Coupe joined the growing list of Dundee players to be denied by Dabrowski when the keeper got down to beat away his strike from 15 yards.

Coupe should have put the game to bed with 12 minutes to go, but he couldn’t turn Lambert’s cross into the net from a matter of yards out. Deacon nearly completed his hat trick with five minutes left, but he curled his free kick from 18 yards narrowly wide.

With the game in injury time, Hibs threw caution to the wind, and were rewarded when substitute Gregor Woods squeezed a header past Malherbe, whose touch on the ball wasn’t enough to keep it out.

There was still one twist left, as Dundee went for broke, Deacon managed to get to the by line and his cut back was forced over the line by John Smith with the last kick of the game, earning the Dee a valuable three points, and moving them up to second in the league table.