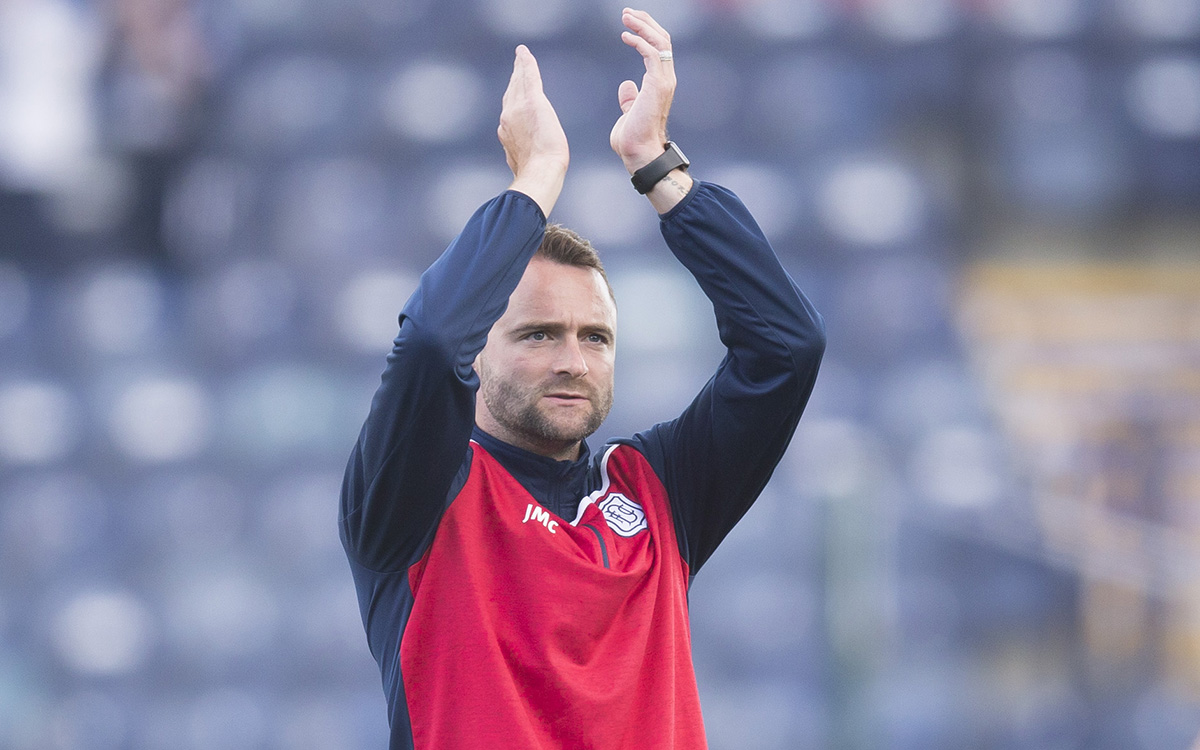 Manager James McPake was understandably happy when he spoke to DeeTV after the 3-0 win in the first game of the season at Raith Rovers and said, “I’m delighted and I wasn’t going to come here and say it was still pre season because it’s not, it’s competitive football.”

“I said earlier in the week that we were ready and we looked ready and were at it from very early on. I’m delighted we managed to get the result and equally we got the clean sheet as they have been hard to come by for this football club for too long now and we need to get in the habit of doing that.”

Expanding on the point about the clean sheet the manager was full of praise for goalkeeper Jack Hamilton and said “Jack’s been great and he worked really hard to get back to a level after finger surgery last season. When he wasn’t playing he was chapping on the door asking to play for the reserves as he wanted football and he came and helped me with the reserves and with the kids and he deserved that today.”

“He’s a quality goalkeeper and was in the Scotland squad a couple of seasons ago and I’m delighted for him. For goalkeepers everything is about clean sheets and I’m happy he got it.”

Talking about the six debutants who started the match, McPake said, “A lot of work has gone into trying to gel the team but you have to have a buy in from the players to believe in what you’re doing and as a staff we believe we’ve got that. The players showed today a lot of the stuff we’ve been working on and we’ll continue to do that.”

“There will be more players coming in but credit to the club for the week away in Spain where we got to spend a lot of time on the training pitch and it’s coming together but it’s just the start.”

The manager was delighted with the passage of play that led to the third goal and said, “It was Shaun Bryne showing his real quality and I don’t know how he saw the cut back and he was great. He is more than some people think as he doesn’t just break the play up and give it to the better players, he is one of the better players. He’s great on the ball, his awareness is great and he brings a lot to our team.”

“I’m also delighted for Craig Curran as he deserved that goal as his work rate and everything he brings to the dressing room has been great so far.”

Talking of two goal hero Andrew Nelson the manager said, “I love working with him and he’s a hard working boy and he has high expectations himself and he keeps coming to me, Jimmy and Dave and asking to do bits and pieces to make him a better player and if we can keep him injury free, he’ll show he’s a right good striker. He’s fit, he’s strong and he’s getting the goals he deserves and we’ll continue to keep pushing him”

Summing up the day McPake said “It’s a start for us and that’s all it is and we need to be ready to go again on Wednesday. We need to get into the habit of winning games regardless of whether it’s the Betfred Cup or the league. Winning game of football is what is important to this football club and we are trying to get that ingrained into the players and it is looking like it at the minute”.

The manager’s full interview as well as an interview with the double goalscorer Andrew Nelson can be seen on DeeTV for which you can subscribe to for £5.99 in the UK and get access to highlights, full match replays and exclusive interviews.