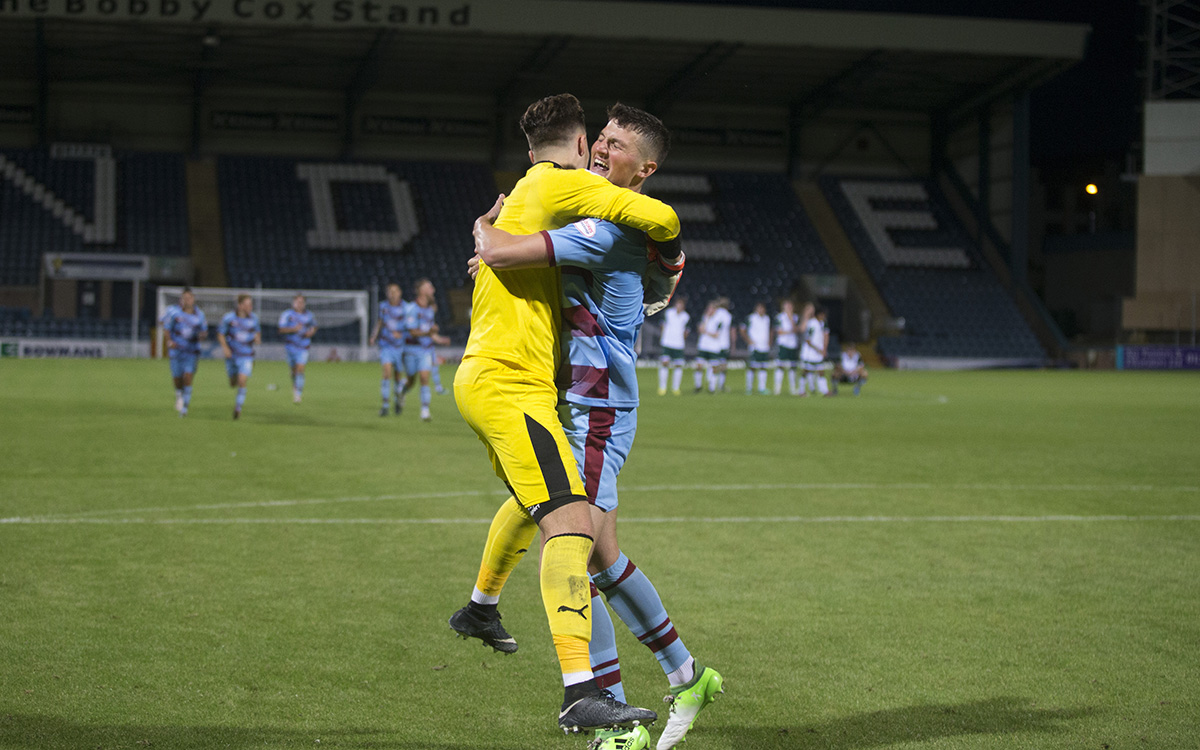 Dundee advanced to the second round of the Irn Bru Cup with a 4-3 penalty win over Hibs. Dan Jefferies netted a late equaliser for the Dees, who opened the scoring through Tom Bradbury in the first half.

The first chance of the game went the way of the young Dees when Cammy Dow met Cedwyn Scott’s cross. The winger’s header didn’t trouble Hibs keeper Paddy Martin as it flashed wide of the far post.

Jack Lambert saw a shot deflected behind for a corner after good link up play from Scott and Matty Henvey. Hibs broke from the resulting corner and forced Sam Jackson into a smart save.

Callum Moore combined with Scott at the edge of the box after a darting run from midfield, but Martin was equal to his low strike after 12 minutes.

Sean Mackie let fly from the edge of the box for Hibs, but his effort sliced harmlessly away from goal.

Dundee looked to have opened the scoring when Scott met a Lambert free kick, but a point blank save from Martin kept the ball out. The keeper’s efforts would prove to be in vain as Lambert clipped in a cross that Tom Bradbury headed into the net after 22 minutes.

The lead would prove to be short lived as Fraser Murray fired Hibs level three minutes after Dundee had opened the scoring. The ball broke to the striker after a last-ditch block from Bradbury, and he made no mistake with an emphatic curling finish from 15 yards.

Hibs were quick to respond as Innes Murray fed the ball into his namesake Fraser, but the striker dragged his shot wide.

Scott was denied by Martin once again as Dundee looked to retake the lead. Henvey teed up his strike partner at the edge of the box, but he could only fire the ball straight at the Hibs stopper.

Henvey drilled an effort wide from 25 yards shortly before half time. A quick break from a Hibs corner saw a Lambert strike deflect wide.

Both Grant Rodger and Dow were shown yellows early after the restart as both sides looked for the game’s third goal. The two Dundee men were quickly joined by Hibs Gullan, who was judged to have dived in the box under the challenge of Dundee captain Callum Moore.

Fraser Murray stung the palms of Jackson with a fierce drive from distance 10 minutes after the restart.

Both sides went in search of a winner as extra time neared, but some fine defending and a poor finishing meant the score stayed level. Dow fond Lambert on the left of the box, who curled a shot harmlessly over.

Hibs sub Ryan Shanley was sent in behind the Dundee defence, but Jackson parried his volley to safety. Sean Mackie was denied by the Dundee keeper shortly after.

Allan thought he had given Hibs the lead when he swept Gullan’s pass towards goal, but the ball deflected narrowly wide.

Hibs made their pressure pay with 15 minutes to go when Jackson could only divert Shanley’s cross into the path of Mackie, who lashed the ball past the recovering keeper.

Lambert lifted the ball into Scott, who’s knockdown was met by Henvey, who’s first time strike was kept out by Martin.

Mackie jinked into the Dundee box and was denied by Jackson. The rebound was played into Yrick Gallantes, who fired over.

At the other end, Henvey saw a strike deflected onto the roof of the net. The resulting corner was met by Dan Jefferies, who headed home at the back post.

Henvey went close in injury time with a fierce strike from the right angle of the box, but the ball whistled wide, and the game would be decided by penalties.

Jamie Gullan and Cedwyn Scott both converted before Jackson kept out Ben Stirling’s effort. Matty Henvey kept his cool to give Dundee the lead.

Kevin Waugh found the top corner before Jack Lambert was denied by Martin. Jackson kept out Innes Murray’s effort to keep Dundee in the driving seat.

Cammy Dow sent Martin the wrong way to extend Dundee’s advantage before Lewis Allan netted for Hibs. The final kick was taken by Tom Bradbury, who made no mistake with a powerful strike that sent Dundee through to the next round.