“I’m pleased that we’ve progressed in the cup” 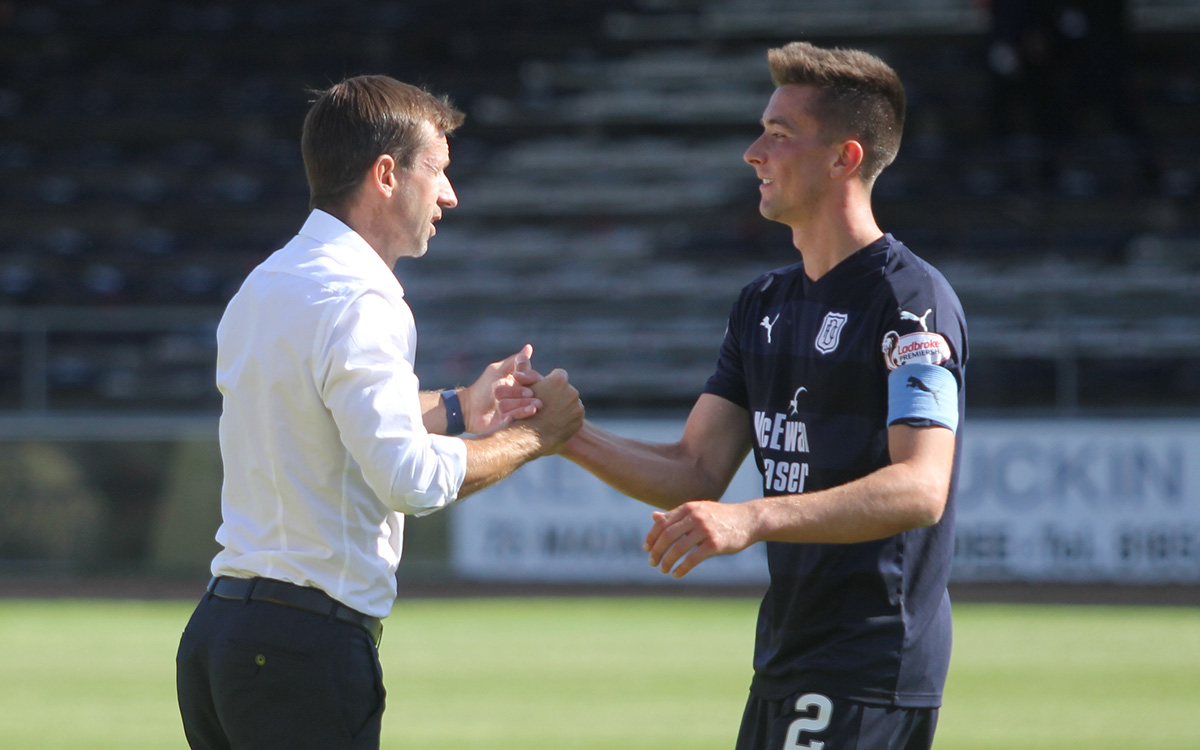 After Dundee’s 2-0 victory over Brechin City at the Kilmac Stadium at Dens Park, manager Neil McCann was satisfied that the Dark Blues had progressed to the knock out stages of the Betfred Cup, although frustrated not to win the section.

“I’m pleased that we’ve progressed in the cup”, Neil told DeeTV at full time, “but not pleased that we didn’t topped the group but that is down to our own downfall last week against Dunfermline.”

Neil was much more upbeat however about the performance against Brechin, saying “That’s probably the most comfortable we’ve felt in a match in terms of dealing with an opposition. Our performance today was much better and I think we improved from the win against Peterhead.”

“We created lots of chances and their keeper getting man of the match suggests we should have had a lot more goals. We should have been a lot more clinical in the final third but I’m pretty pleased. The most important thing in cup football is to progress and we’ve done that and I’m pleased for the fans”.

Neil refused to be drawn when asked about who he’d like to face in the next round saying, “You just have to take who you get in the draw in cup football. Clearly you want the easiest route possible and maybe avoid the big teams who are coming in from playing in Europe but it is our own fault we are not seeded and we’ll need to take whoever we draw now.”

Discussing the team’s performance, Neil said, “I thought Cammy was really good again in the left back position. The two full backs were solid today and Jesse looks like he is really starting to come onto a game and is now understanding the position. Cammy gives us the assurance that we can put him out into the left back position and he’ll give us an all or nothing performance always. Both are learning how we want to deploy our full backs with possession and did well.”

“I’m delighted that Nathan got on today and was not out too long with his calf injury. We gave him a little bit of time today as Elton was feeling his groin so we had to protect him.”

“There were good performances all over the pitch. I though Kharl Madianga in the middle of the pitch was exceptional at times. Everyone wants us to score more goals and be aggressive in the front areas of the pitch and Kharl and Elton are adding that to our squad. They are releasing Gowser further up the pitch and he got his goal today and probably got another couple and that is pleasing.”

“You want your forwards to score clearly but when they are not scoring you want your next line of attack, which is your midfielders and we’re getting that which I am pleased about. “

“I thought Lewis’ performance today was a step up. He was superb against Peterhead and he was great again today. His control of the game was good and I was pleased he broke the deadlock early because these games can be sticky the longer they go with a goal. It was a really assured performance where he was tenacious, broke the game up and moved the ball to the boys in front of him which was exactly what I was looking for.”

When asked if we ready for the start of the Premiership next week, the manager said, “I think we’re getting there but I don’t think we are up to speed yet. We’ll be away at a St Mirren team who’ll be looking to get off to a good footing but we really want to make a good bit of traction early in the season.”

“I’d like to think we could add one or two bodies if we could before next weekend but if we don’t the boys coming back from injury will make us a strong squad and then we travel to Paisley to try and get the three points.”

Subscribers can watch the full video interview with Neil on DeeTV alongside a full match replay, highlights and a match round up including Lewis Spence and Cammy Kerr.