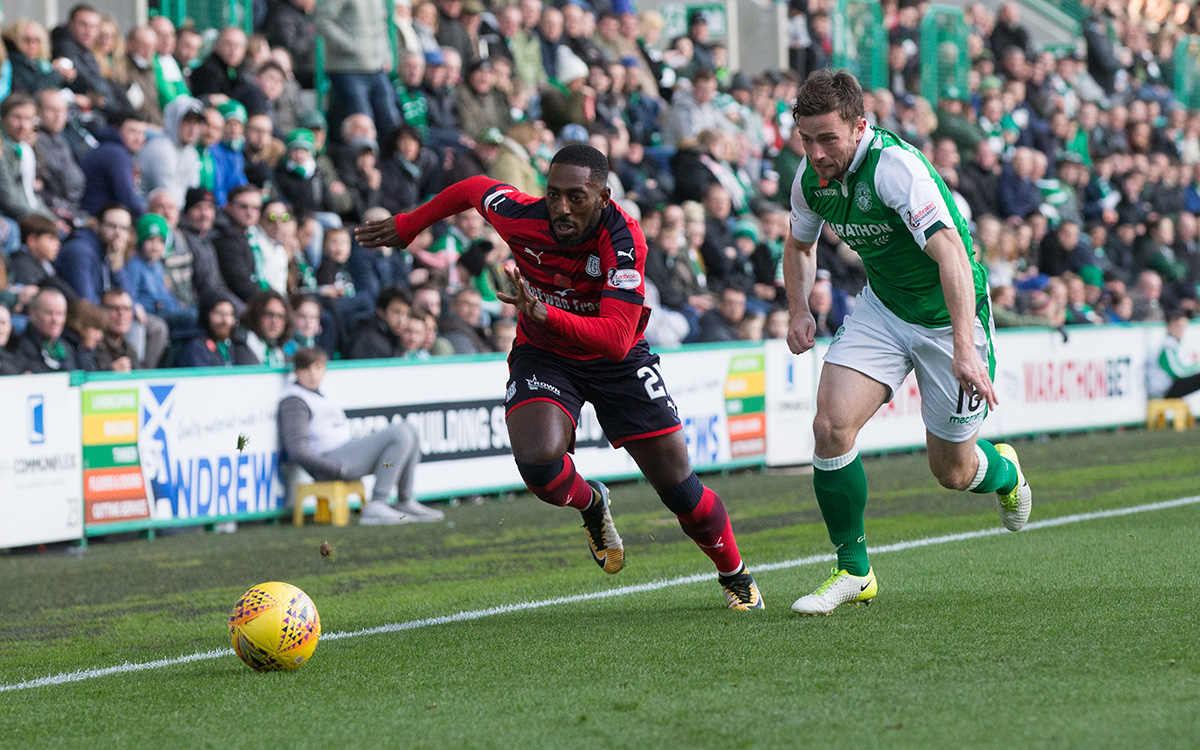 Dundee’s first Ladbrokes Premiership match after the winter break sees Hibernian come to Dens on Wednesday and here we round up everything you need to know ahead of the match.

The Dark Blues went down narrowly to a 2-1 defeat by Hibernian in Edinburgh last November. Dundee had the better of the first half after falling behind to Martin Boyle’s early goal and deservedly equalised through a Marcus Haber header. However, Hibs recovered after the break and Simon Murray scored the winner just after the hour.

New promoted Hibernian had a tricky Betfred Cup group as their section was the only one with two Premiership sides but they won the group ahead of Ross County.

Hibs opened their season with a comfortable home win over Montrose with new signing Simon Murray scoring twice on his debut and he would score seven goals in total in the group stages.

Hibs’ second match was a trip up to Dingwall to face Ross County and after a 0-0 draw, Ross County took the advantage in the group by winning the bonus point on penalties.

Undeterred Hibs smashed Arbroath 6-1 at home and then Alloa 3-0 away and when Ross County could only draw at Arbroath and pick up another penalty bonus point, Hibs won the group on goal difference.

Despite not getting a seeding, Hibs drew Ayr United at home who had a 100% record in the competition but it was an easy night at Easter Road as they progressed with a 5-0 win.

In the Premiership, Hibs returned to the top flight with an impressive 3-1 win at home to Partick Thistle after they had unfurled their Championship winning flag but they followed that up with an even more impressive result at Ibrox.

After going behind after just three minutes, Hibs bounced back and went into the break 2-1 ahead. Their case was helped by the sending off of Rangers’ Ryan Jack and new signing Vykintas Slivka put them 3-1 ahead on 65 minutes with a stunning volley.

Rangers pulled one back late on but it didn’t detract from a superb 3-2 win which announced that Hibs were well and truly back in the top tier.

However the following week they slipped to a surprise 3-1 defeat at home to Hamilton and then drew 1-1 with Dundee at Dens.

Hibs followed that up with two more draws with St Johnstone and Motherwell before defeating Livington 3-2 at home in the Betfred Cup but their League Cup progressed was halted at the semi-final stage where they lost 4-2 to Celtic at Hampden.

In the Premiership however Hibs earned a superb 2-2 draw at Celtic Park and the highlight of their campaign so far was the 1-0 derby win over Hearts thanks to an early Simon Murray strike.

Victories over Kilmarnock, Dundee, St Johnstone and Partick and draws with Celtic and Hamilton kept Hibs in third before defeats to Rangers and Aberdeen in December knocked the Hibees momentum.

Before the winter break however they were back on track with a win over Ross County and draws with Hearts and in form Kilmarnock and Neil Lennon can be very pleased with Hibs’ first half of their first season back in the top flight.

However they come to Dens after knocked out the Scottish Cup 1-0 by Capital rivals Hearts.

Dundee’s 2017/18 match programme The Dee will be available to buy at the game in and around the ground and in the club shop. It is a full, colour 52 page edition packed with news, views, features and exclusive interviews which this week include:

Tickets for Premiership match with Hibernian at Dens Park are on sale from the Ticket office.

Fans from outside of the UK who are virtual season tickets will be able to watch the Hibernian match live on DEETV or alternatively they can view it for just £5.