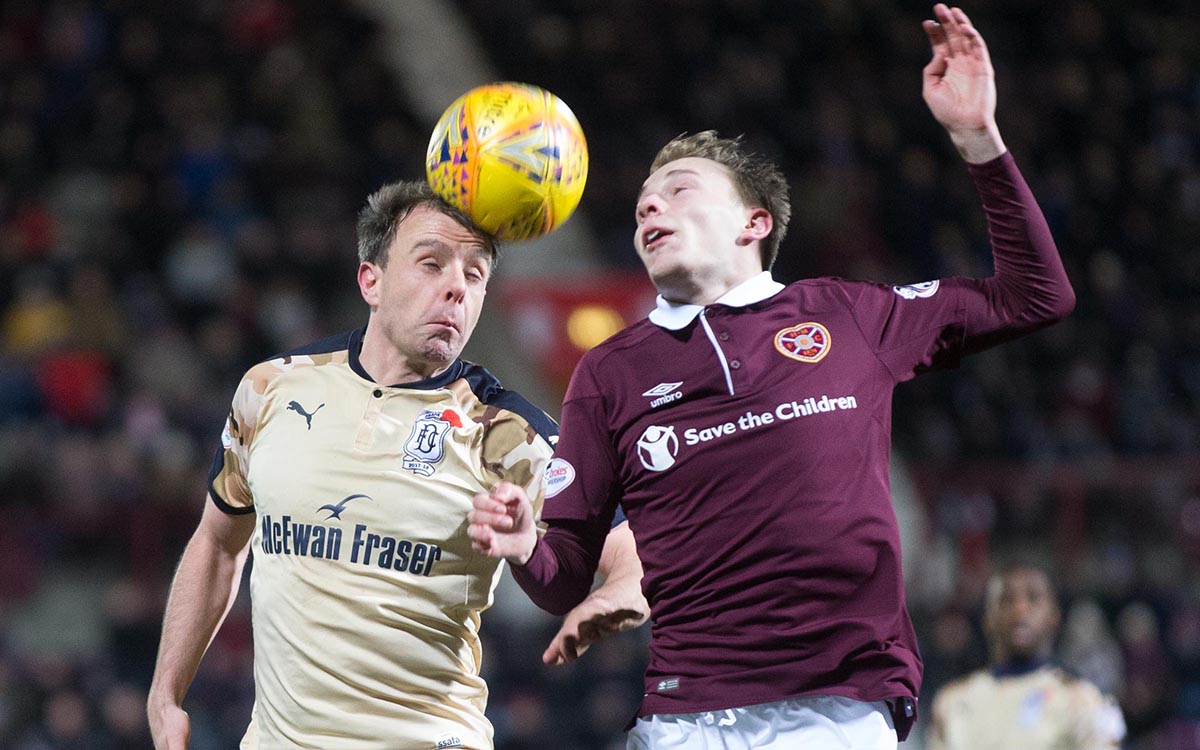 Dundee host Hearts on Easter Sunday in the Ladbrokes Premiership and here we round up everything you need to know ahead of the match.

The city centre of Dundee can be reached easily by both road & rail. From Dundee City Centre you can use the no. 1A or no. 24 National Express Dundee bus service, both of which can be boarded at the Albert Square. For a taxi to the ground, call Tay Taxis on 01382450450

The Dark Blues lost 2-0 against Hearts at Tynecastle last December. An Esmael Goncalves goal on the break put the Jam Tarts ahead in the first half and Christophe Berra added a late second from a corner. Dundee had a few good spells but did not do enough to trouble Hearts and can have no complaints about the result.

Heart of Midlothian’s Season So Far

Hearts’ season kicked off with back to back wins against Elgin City and East Fife in the Betfred Cup but a shock defeat at Peterhead and a 2-2 draw at home to Dunfermline, in which The Pars won the penalty shoot out bonus point, meant that Hearts failed to progress from the section.

The League Cup exit cost Head Coach Ian Cathro his job and when Hearts’ Premiership campaign kicked off with a trip to the champions Celtic, it was interim coach Jon Daly who was in charge for the 4-1 defeat.

With construction undergoing on the new main stand at Tynecastle, Hearts were forced to play their first four league games away from home and they bounced back from the Parkhead defeat with a 1-0 win at Rugby Park. A 0-0 draw at Ibrox was followed up with a 2-1 loss at Motherwell and that Fir Park game was the last in charge for Daly.

Director of Football Craig Levein was appointed as the new Hearts manager during the international break and his first game at charge would be against Aberdeen at Murrayfield. With work at Tynecastle behind schedule, the Jambos were forced to move three home games to Rugby Union’s national stadium and Levein started his second spell in charge with a 0-0 draw with The Dons in front of 24,248; denied a win thanks to an inspired performance from Aberdeen keeper Joe Lewis.

Two more away games saw a win at Hamilton and a draw at Partick before the Jam Tarts came to Dens to face former player Neil McCann, who won the Scottish Cup with Hearts in their eighth away game in nine matches.

A 93rd minute winner from Kerr Waddell gave McCann’s side a vital 2-1 win but Craig Levein picked up his first victories in the next two games with a 2-1 win in Dingwall and a 1-0 win over St Johnstone at Murrayfield.

However Hearts next match was a 1-0 derby defeat by Hibs and this was followed up with another loss, this time 3-1 to Graeme Murty’s Rangers in another game at the home of Scottish Rugby.

Hearts last game at Murrayfield was a 2-1 defeat to Kilmarnock and fortunes didn’t pick in their first game back at Tynecastle, when they drew 1-1 with Partick after the game was finally given the go ahead when a safety certificate was secured.

Another two home draws with Ross County and Hamilton meant six games without a win and the game against Accies was a stormy affair with both Craig Levein and his assistant Austin McPhee sent to the stand.

Hearts got back to winning ways in December with back to back home wins over Motherwell, Dundee and Celtic with the impressive 4-0 win over The Bhoys ending their domestic 69 game win.

Hearts would go on to record a club record eight clean sheets in a row which stretched over the winter break and the penultimate of those was a 1-0 win over Hibs in the 4th round of the Scottish Cup.

The Jambos knocked St Johnstone in the next round with a 3-0 home win, a week after a 1-0 win over the Perth side in the Premiership but they would exit the Cup in the quarter-final with a 2-1 defeat at Motherwell.

After the Fir Park defeat, Hearts followed that up with a 2-0 loss to rivals Hibernian, putting their top six hopes in jeopardy but bounced back in their last game before the international break with a 3-0 win at Tynecastle over Partick Thistle where all three goals were scored in the first half.

Tickets for Premiership match with Heart of Midlothian at Dens Park are on sale now online and from the Ticket office.

Dundee’s 2017/18 match programme The Dee will be available to buy at the Hearts game in and around the ground and in the club shop. It is a full, colour 52 page edition packed with news, views, features and exclusive interviews which this week include:

As well as the match being live on SKY Sports, fans from outside of the UK who are virtual season tickets will be able to watch the Hearts match live on DEETV or alternatively they can view it for just £5.