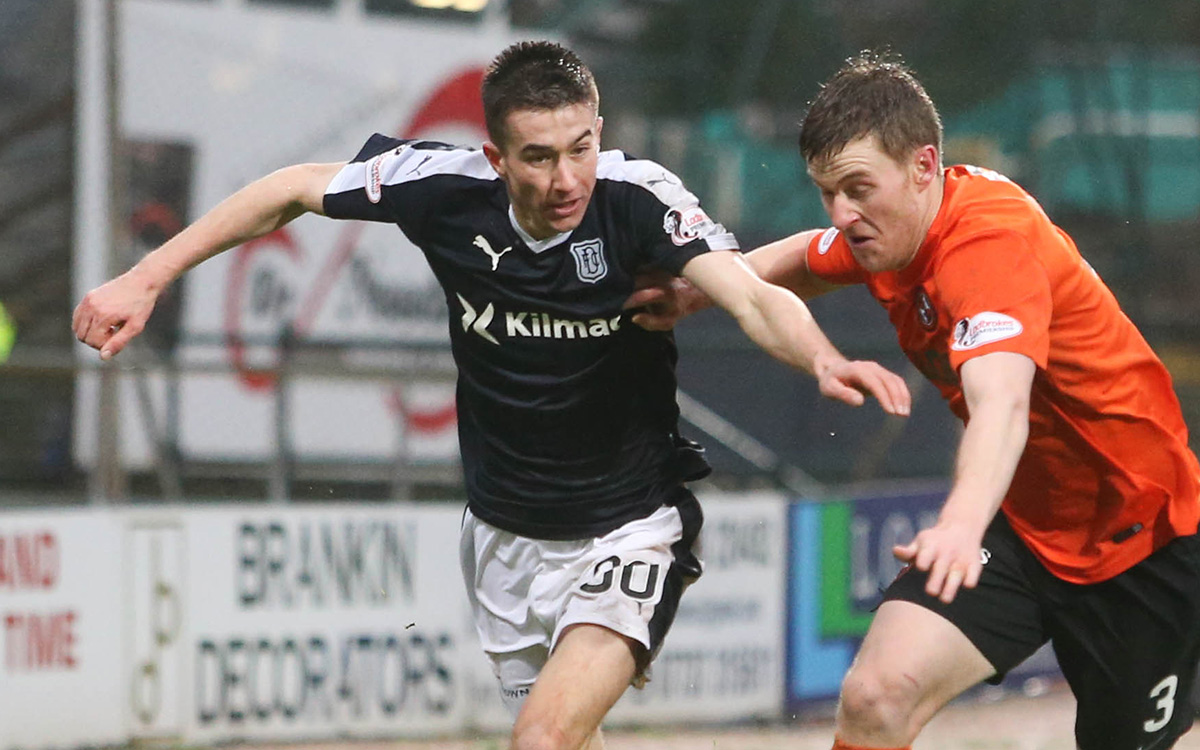 The Dundee derby is back after a 14 month absence as Dundee take on neighbours Dundee United in the Betfred Cup on Sunday and here we round up everything you need to know ahead of the match.

NICKNAME: The Terrors, The Arabs

Kevin Clancy has been a referee since 2000. He was admitted to SFA Senior List in June 2005 and got promoted to Scotlands Category 1 in June 2009. In 2012 he started his international career as a UEFA category 3 official.

A year past May, Dundee United’s worst nightmares were realised when their city rivals Dundee FC beat them – and relegated them – at a raucous Dens Park, in a match forever to be known as the ‘Doon Derby’.

Mixu Paatelainen’s team gave themselves a chance when Edward Ofere side-footed John Rankin’s pass into the net but Dundee came storming back with an equaliser from Kostadin Gadzhalov’s header.

That alone was enough to send United down, but Dundee added a second when Craig Wighton found the far corner in injury time.

Dens Park rejoiced in their rivals’ misery, lapping up the victory and all that it meant, all the pain and misery dumped on top of a beleaguered, and emotional, United support.

It was an odd evening. For fully 55 minutes, until Ofere silenced the home crowd, United never looked capable of doing what needed to be done to stave off doomsday. They just weren’t at the races. They were again hesitant and nervy at the back and loose in possession, continually inviting trouble on themselves with their careless use of the ball.

Their old foes were up for it, as if there was any doubt about it. It was Paul Hartley’s team that carried a goal-scoring threat, principally through the inventive Greg Stewart. The nominee for PFA Scotland’s player of the year was clever all night. His fellow nominee, Hemmings, was also a regular source of concern.

The best chance of the opening half – Dundee were dominant but just not accurate enough to pepper United’s goal – fell to Hemmings after Paul Dixon was robbed in possession and Dundee scampered downfield. However, despite being so consistent for so much of the season, he ballooned his shot over.

Dundee were denied a big claim for a penalty early in the second half when Darren O’Dea went tumbling in the box, but even there wasn’t a whole lot of Dundee anger about the decision. The notion that United would soon score and turn the narrative on its head seemed potty at the time. That’s what happened, though.

United, in really their first piece of constructive football, broke down the left-hand side and when Rankin slid in a low cross, Ofere was there all on his lonesome to guide it past goalkeeper Scott Bain.

In those minutes after the goal, United came alive. Nick Ross had to kick a Mark Durnan header off the line, then Kyle Knoyle put Ofere through one-on-one with Bain. It was a highly dramatic and hugely significant moment. Had Ofere scored then United surely had the game won. He didn’t; Bain denied him.

And how telling that save was to prove. Within a few minutes, Gadzhalov connected with a Gary Harkins corner and although Kane Hemmings tried to get a touch, he didn’t and immediately acknowledged the Bulgarian  as the scorer who had sent Dens Park into raptures.

Eventually they did, the wonderful Stewart placing a free-kick into the path of Wighton, who finished with aplomb to write himself into Dark Blue folklore in the 94th minute.

The clock ticked on agonisingly for United. Then time ran out, in every sense. Gadzhalov and Wighton had landed the knockout blows that sent them plummeting through the trap door and into the Championship, from which they failed to get promotion last season.

Dundee United played just one pre-season friendly before the competitive games started where they won 3-0 away at Montrose thanks to goals from McMullan and Smith (2).

After a busy summer in the transfer window it was a different looking United side who opened their Betfred Cup campaign at home to Raith Rovers on Saturday 15th July compared to the one who failed to get promotion in May. Raith looked well organized and provided stubborn opposition for most of the match but eventually United got the three points when goals from McMullan and Keatings from the spot, earned a 2-0 win.

United’s second game saw them travel north to Buckie and three first half goals from McMullan, King and Durnan a comfortable 3-0 win.

They continued that three goal winning margin in their next game at home to Cowdenbeath where goals from Stanton, King, Fraser (pen) and Smith gave them a 4-1 win, setting up a shoot out with The Dee for Group C’s top spot.

The match is all ticket and as demand is high in many areas of the ground fans are urged to buy their tickets as soon as they can to avoid disappointment.

Tickets can be bought via our website www.dundeefc.co.uk, to personal callers at the ticket office in Dundee Direct or by telephone on 01382 767039

Dundee have again teamed up with Curtis Sport for the 2017/18 match programme and the Betfred Cup derby edition for Sunday will be a 52 page, full colour edition packed with news, views and features including

Fans from outside of the UK who are virtual season tickets will be able to watch the Dundee United match live on DEETV or alternatively they can view it for just £5.