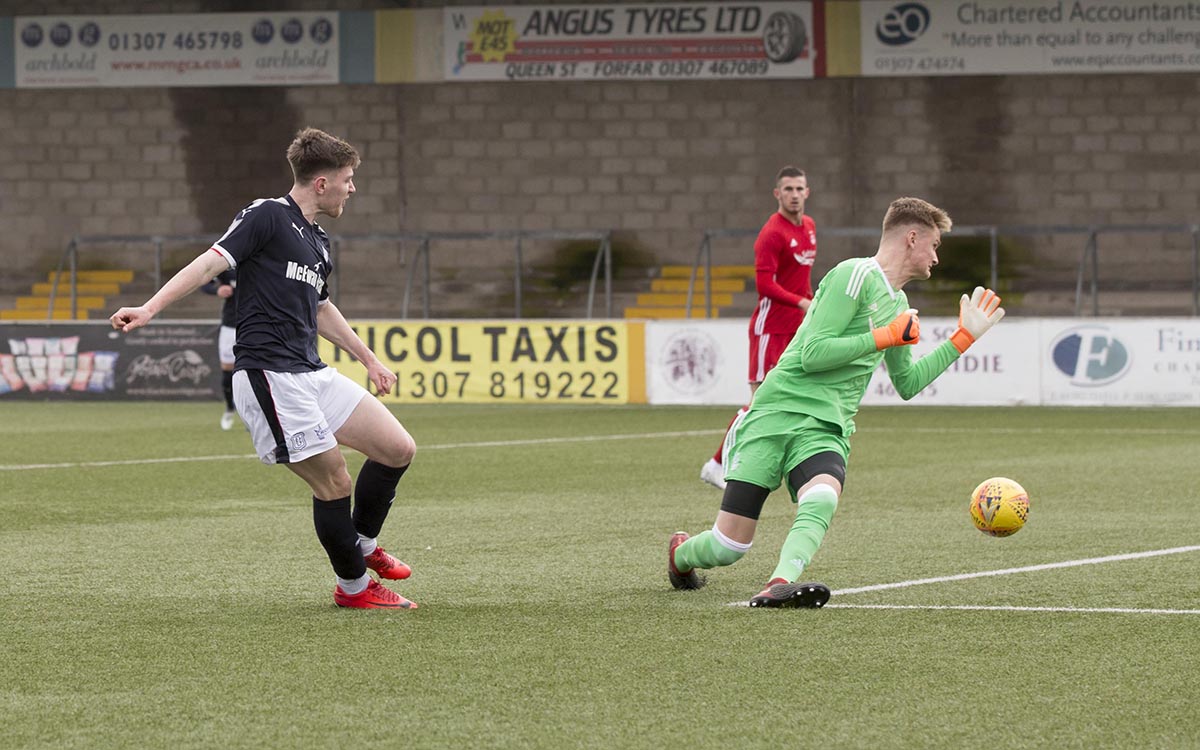 Dundee moved top of the Development League with a 1-0 victory over Aberdeen at Station Park this afternoon.

Jimmy Boyle’s side started the day a point behind Hibernian and with them playing this evening the young Dee are top for at least the afternoon.

Dundee took the lead after just 14 minutes when Craig Wighton picked the ball up just inside the Aberdeen half and drove forward. He slipped the ball through to Cedwyn Scott who had made a fantastic run to beat the offside trap and made no mistake, knocking the ball past Mair to make it 1-0.

Just after the half hour mark Dundee almost doubled their lead with after some wonderful build up play. The young Dee were in complete control knocking the ball around before advancing up the park. Curran found Wighton with a ball in behind but his first time effort looped over the keeper but sadly landed on the roof of the net.

Aberdeen’s best chance of the half came when Wright was played in down the right. He had time to compose himself but fired his shot wide of the far post.

Dundee had one other great opportunity before the half was out. Jordan Piggott did brilliant in the midfield before finding Jack Lambert who glided past two before rolling it across the 6 yard box, inches for the sliding Scott who just couldn’t make contact.

After the break both sides continued to look to add to the scoresheet.

Aberdeen had a penalty claim after 10 minutes of the second period when Calum Ferrie made contact with one of the hosts players when he punched clear. The referee consulted with his linesman and deemed that no action should be taken.

The young Dee continued to play some nice stuff but just couldn’t find a way past Mair again. Wighton forcing the keeper into two good saves.

The Dons best chance of the second period came with seven minutes remaining when Wright found Cosgrove in the area, his shot was saved by Ferrie but skipped up and Kerr Waddell had to clear from infront of the empty net.

From then on Dundee saw the game out in a professional manor to make it nine wins in a row and to put themselves in the driving seat for now.