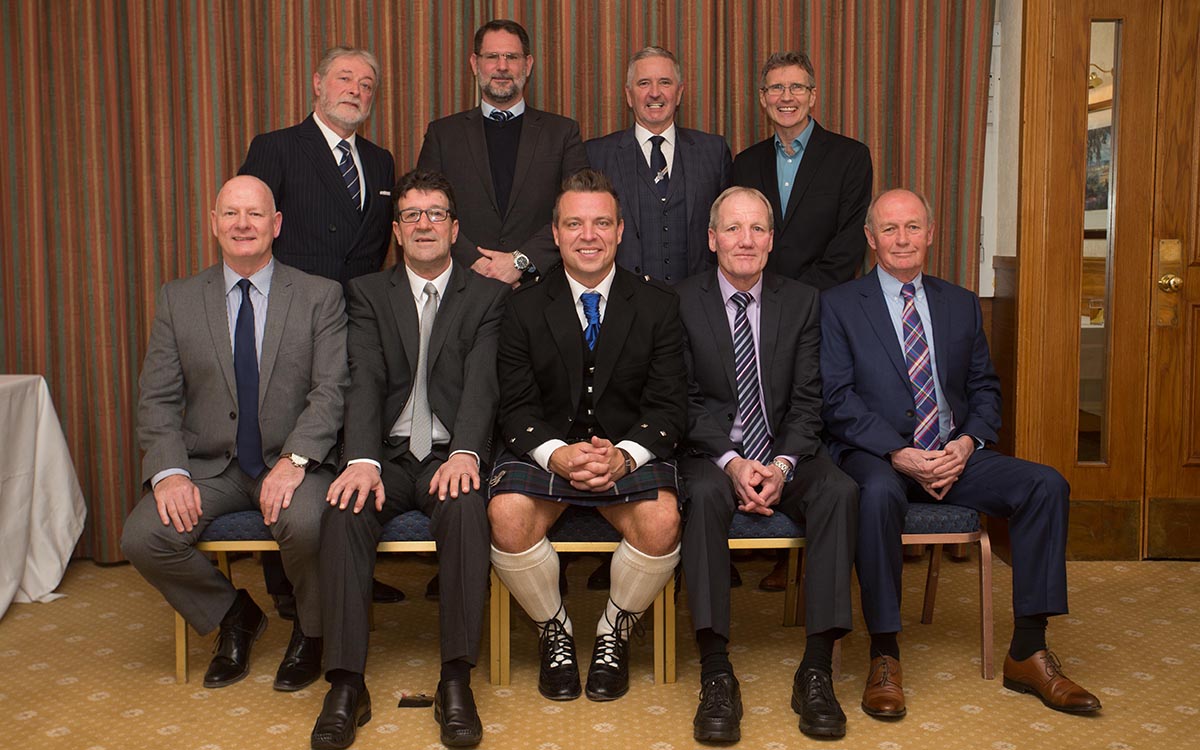 We sat down with Eric Sinclair, Cammy Fraser and Gavin Rae who were all there on the night to collect their awards. David ‘Napper’ Thomson and Bobby Flavell were represented by family members and on the stage all shared fantastic tales of their own and their loved ones time at Dens Park,

Below are short profiles on each inductee and the video interviews with Eric, Cammy and Gavin.

David Thomson was a pre-war Dark Blue stalwart defender making 385 appearances over a fourteen year period with Dundee FC, his only senior club. A local boy who was nicknamed ‘Napper’ because of his cool, collective approach, he played for Dundee in the 1925 Scottish Cup Final and earned one full cap and two Scottish League caps during a distinguished Dens Park career.

The third recipient of the Golden Era Award is a man who scored in both winning League Cup Finals of 1951 and 1952, Bobby Flavell. To score a goal in a winning cup final for Dundee is pretty special but to do it twice is incredible and only one man has achieved this tremendous feat.  When Dundee became the first side to win back to back League Cups, Bobby Flavell wrote himself into the Dark Blue history books by scoring in both victorious finals including both goals in the 2-0 victory over Kilmarnock in 1952. A predatory striker who scored 53 goals in 93 appearances (plus another 15 in the 1953 summer tour of South Africa), Flavell enjoyed a prodigious partnership with Billy Steel which saw The Dee play in three major cup finals in a row.

Hailing from Fintry, Cammy Fraser is ‘one of our own’ and an inspirational captain from the early eighties. He joined Dundee in September 1980 when they were bottom of the First Division and by the end of the season his drive and attacking midfield flair helped Dundee win promotion and to a national cup final after scoring the winner in the League Cup quarter-final away at Premier League champions Aberdeen and a vital equaliser in the semi against Ayr. He also played his part in the First Division title winning campaign in his second spell in 1992 and was a terrific player who gave his all every time he pulled on a dark blue shirt.

Eric Sinclair was a player who was wholeheartedly committed to the cause,  played for the jersey and who enhanced his reputation and popularity when he scored the goal which returned Dundee to the Premier Division in May 1981. The tall, blond, predatory striker never gave anything less than 100% during games and was a regular goal getter for The Dee, netting 95 times in 289 appearances and finishing as top goal in two different seasons. He won the SPFA First Division Player of the Year in 1980/81 when his 22 goals helped Dundee into the top flight and was capped by the Scottish League when he scored against the English League. Sinky’s speciality was shielding the ball with his back to goal and he was also part of the Dundee side which won the 1979 First Division title and played in the 1980 League Cup Final. Eric also scored in the famous 5-1 win over Celtic in April 1980 and to cap it off scored the only goal against Dundee United earlier the same season; the second time he had scored a winner in the derby.

Gavin Rae enjoyed three spells at Dens between 1994 and 2014 and became the 21st player to reach his third century of games in dark blue just before lifting the SPFL Championship trophy as skipper in May 2014. He was a grand servant to The Dee with his riving midfield play and his time at Dens also saw him win the First Division, play in the Scottish Cup Final, score in the U.E.F.A. Cup and become Dundee’s first Scottish internationalist in fifteen years.