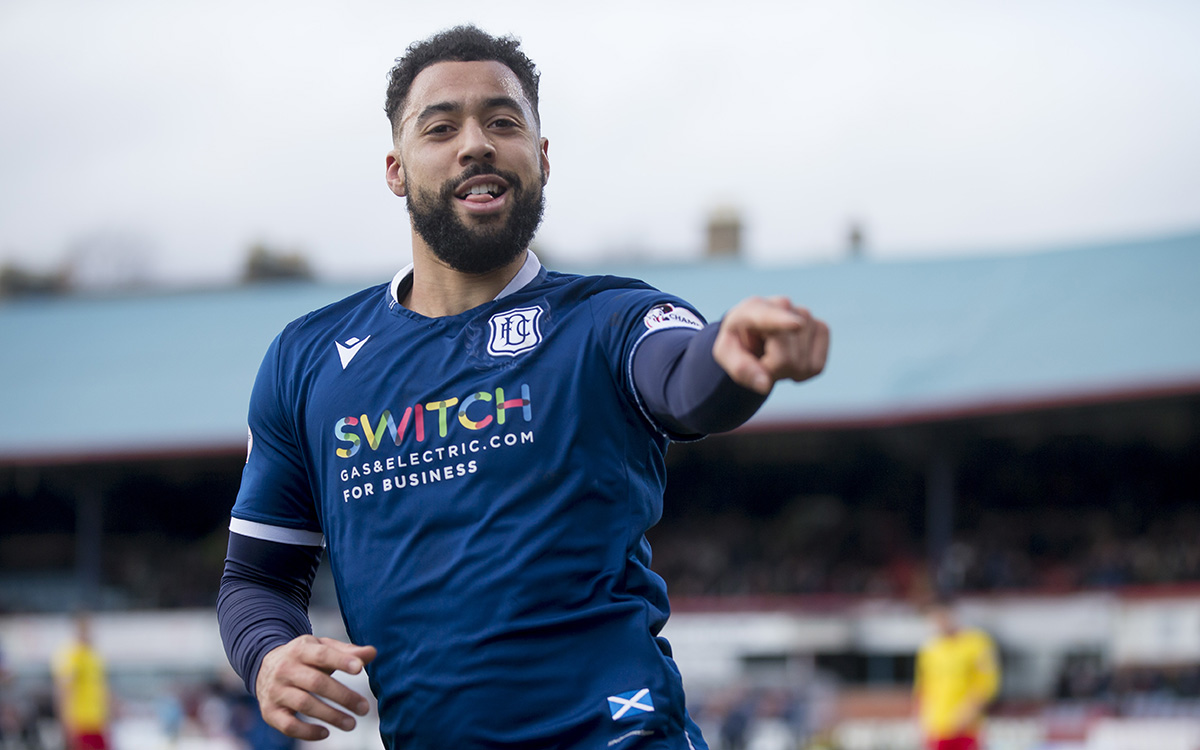 A well taken brace of goals from Kane Hemmings in the first half gave the Dark Blues a vital 2-0 win at the Kilmac Stadium at Dens Park. The three points were never in doubt after the Dee’s top scorer notched his second. Dundee went on to dominate the second half but couldn’t add to their tally. The players saw out the game comfortably to earn a victory that takes the Dark Blues back into the play off positions.

The Dark Blues had three changes from the side that drew at Morton. Christie Elliott made his first start, facing the club he served for eight years. Josh Meekings and Paul McGowan also returned to the starting eleven. They replaced Cammy Kerr and Jordan McGhee, who are unavailable pending their recovery from surgery, and Ollie Crankshaw, who was on the bench. The Jags made only one change. Jamie Barjonas came in for Darian Mackinnon.

Josh Meekings didn’t come in as a straight replacement for Jordan McGhee at left back. He lined up in a three man back line with Declan McDaid and Christie Elliott playing as wing backs. McDaid in particular was in lively form, playing well up the field as Dundee had the better of the early stages without doing anything to cause Jags keeper Scott Fox real problems. The closest to a half chance came at the other end when only Jordon Forster’s challenge prevented Brian Graham getting a clear header following Joe Cardle’s cross.

Despite the lack of goalmouth action Thistle’s defence had looked uncomfortable and vulnerable. This was exploited when the Dee took the lead after 23 minutes. McDaid swung over a deep corner from the left. Jordon Forster, arriving late with speed and strength was unstoppable, powering a header from 10 yards down into the goalmouth where Kane HEMMINGS was lurking in classic poacher style to tuck the ball over the line.

The Dark Blues grew in confidence and Thistle became even more nervous. 10 minutes later that combination led to Dundee’s second goal. James Penrice stumbled 40 yards from his own goal as he tried to control a long ball down the middle. Paul McGowan pounced on the mistake, instantly playing Kane Hemmings through. There was still hard work to do, but HEMMINGS’ strength and pace allowed him to force his way clear of the last two defenders before clipping his shot neatly past Fox.

Thistle could offer little in response as the Dee went on to remain in firm control. The half time whistle brought applause from the home fans and disgruntled boos from the away support. Partick made two changes at half time, bringing on a third central defender and another midfielder to replace two midfielders as they tried to match up to the Dee.

For a few minutes it looked as if the Jags’ changes might work. In the first half Thistle had been ponderous and ineffective in attack. Now they had more zip and pushed forward to try and rescue the game. Dario Zanatta had a skillful run in from the right, but his shot took a deflection that sent the ball kindly into Conor Hazard’s arms. That was the Jags’ first and last shot on target.

Dundee weren’t sitting back and also went hunting for a goal that would kill off Thistle. Play swung entertainingly from end to end, but soon it settled down pleasingly in Dundee’s favour as the Dark Blues took the sting out of Thistle’s challenge and went on to dominate the remainder of the match.

Declan McDaid was a constant menace to Thistle on the left. He showed great skill to run along the byline before driving a low cross to the near post where Scott Fox managed to clear with his feet. Ross Callachan powered in a shot from 18 yards but Fox beat it away.

All the attacking threat was coming from Dundee. Christie Elliott broke through from midfield, but couldn’t find enough power from 18 yards to beat Fox. Hemmings found space six yards out but didn’t connect cleanly with his header and again Fox saved.

The Dark Blues put in some clever and inventive attacks, but the third goal wouldn’t come. Finlay Robertson came on for Shaun Byrne, who had a solid game but had picked up a yellow card that forced him to be cautious with his midfield tackling. After returning from injury Andrew Nelson also had a late run out after Ross Callachan was carried off the pitch on a stretcher. Neither change disrupted Dundee’s control of the game and they closed out the win professionally.

It wasn’t a match that supporters will be talking about in years to come but this was a sound performance in an entertaining game. The Dark Blues were solid all over the park and won their battles with their Jags counterparts. In attack the Dee always had an edge on Thistle’s defence. The Dark Blue midfield was more composed and effective, and the defence was never in serious trouble. Christophe Berra and Christie Elliott impressed on their first appearances for the Dark Blues at Dens. A third goal would have been a nice bonus, but three points, two goals and a clean sheet were all very welcome and enough to ensure that only one set of fans was applauding at the end as Dundee moved up two places to fourth and into a play-off position.