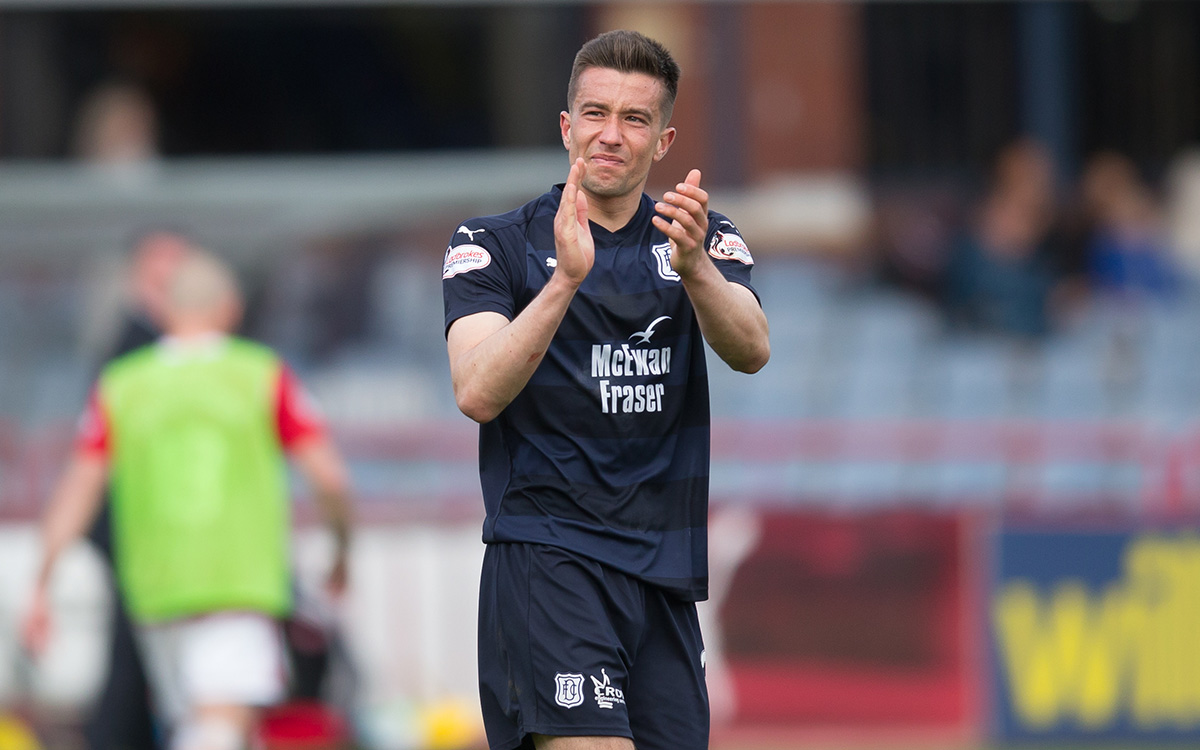 With two games to go Dundee’s relegation from the Premiership was confirmed by a 1-0 defeat at home to Hamilton Academical. Accies’ late winner from the penalty spot by Tony Andreu might have been controversial but the Dark Blues can have no complaints about the outcome. On a day when a win was needed desperately the Dee’s performance fell short.

The Dark Blues made three changes. Darren O’Dea, James Horsfield and John O’Sullivan replaced Nathan Ralph, who was injured, and Jesse Curran and Craig Curran, who were on the bench. Dundee’s injury problems meant there were only six players named as substitutes. Accies’ only change was Reegan Mimnaugh coming in for Dougie Imrie.

Dundee have had a bad habit of shipping careless early goals this season and almost did it again today. Tony Andreu’s flighted free kick from the half way line was flat and heading for the edge of the penalty area. Seny Dieng raced from goal but was never going to reach it and was releived to see Marios Ogkmpoe’s back header sail narrowly wide of his unguarded goal.

The game had little of the feel of a crunch relegation match with Accies happy to slow the game down and waste time, while Dundee struggled to turn the occasional piece of neat play into serious problems for the away defence.

Andrew Nelson and Scott Wright twice had dangerous looking runs ended by well timed fouls as most of the play took place well clear of the penalty areas. The two goalkeepers’ involvement was restricted to dealing with backpasses and straightforward crosses.

Dundee’s best moment of the half came late on when Nelson’s neat flick allowed Ethan Robson to race into the penalty area only for his shot to be blocked. Cammy Kerr followed up and hammered a 25 yard shot a foot over the bar.

Accies finished the half by going close when Darian Mackinnon was sent clear by George Oakley’s flicked header. Dieng was off his line quickly to block, but the ease with which the Dee defence was opened up by a very simple move was worrying.

Cammy Kerr played the first half in central midfield, keeping an eye on Tony Andru who was lurking in the hole behind the two strikers. It was an unfamiliar position for Cammy, but the ploy was effective and prevented Andreu making the late, unmarked runs into the penalty that are his trademark. However, the Dark Blues were offering little in attack and it was no surprise then the formation was changed at half time. Craig Curran came on for Genseric Kusunga and Cammy Kerr moved to right back with James Horsfield going to left back.

The changes gave Dundee a simpler, more familiar 4-4-2 shape but there was no improvement in the Dee’s attacking. Meanwhile Hamilton had more freedom to try and spring Andreu into dangerous positions and they gradually started to take advantage.

Dundee did threaten for a brief period just before the hour when they stepped up the pace of the game and briefly roused the crowd. There was a flurry of excitement, even hope, when Accies defence got in a mess at a free kick. Keeper Ryan Fulton came for the ball and failed to reach it. Darren O’Dea’s header was looping wide but Craig Curran retrieved the ball and chipped a cross or shot that was heading under the crossbar till Fulton pushed it to safety. A minute later John O’Sullivan glanced a header a foot outside the post. With over half an hour to go that was the final time that the Dee threatened Accies’ goal, which highlights how feebly Dundee met their fate.

Accies meanwhile started to believe they could win the game and began to create the sort of chances that were beyond the Dark Blues and their lacklustre efforts. Aaron McGowan seemed sure to score when his looping header at a corner was heading for the back of the net, only for James Horsfield to appear from nowhere to hook the ball off the line. A run from deep by Andreu wasn’t picked up but he was foiled by Dieng’s fine save. Scott Martin wasn’t far off target with a curling shot from 22 yards and George Oakley forced a save from Dieng with a fierce angled drive.

Accies were no great shakes, but they were more organised than the Dark Blues and they were getting men into positions where they might hurt Dundee. It was no great surprise when Accies earned themselves a penalty after 82 minutes. An enterprising run by substitute Mikael Miller was ended when Ryan McGowan’s tackle seemed to knock the ball away. Referee Nick Walsh decided it was a foul and awarded a penalty. ANDREU sent Dieng the wrong way from the spot and that setback flattened the Dee.

There was plenty of effort but it was all misplaced and entirely ineffective; only Accies looked as if they might give the game a second goal. Dieng saved well from Miller, who had been allowed far too much space and that was that. Including injury time there were still 10 minutes to play, as the Dark Blues slipped out of the Premiership in a manner that the supporters found hard to accept.

There were moments this season when it looked as if the Dark Blues would pull themselves clear of danger, notably when they emerged from the mid-season break with good wins at Hearts and Livingston. Instead of building on that Dundee went into freefall, losing 10 games on the bounce, a grim statistic that matches a club record set in 1898. Relegation looked inevitable well before the final whistle today and the muted response of the fans at the end suggested they had expected nothing more.