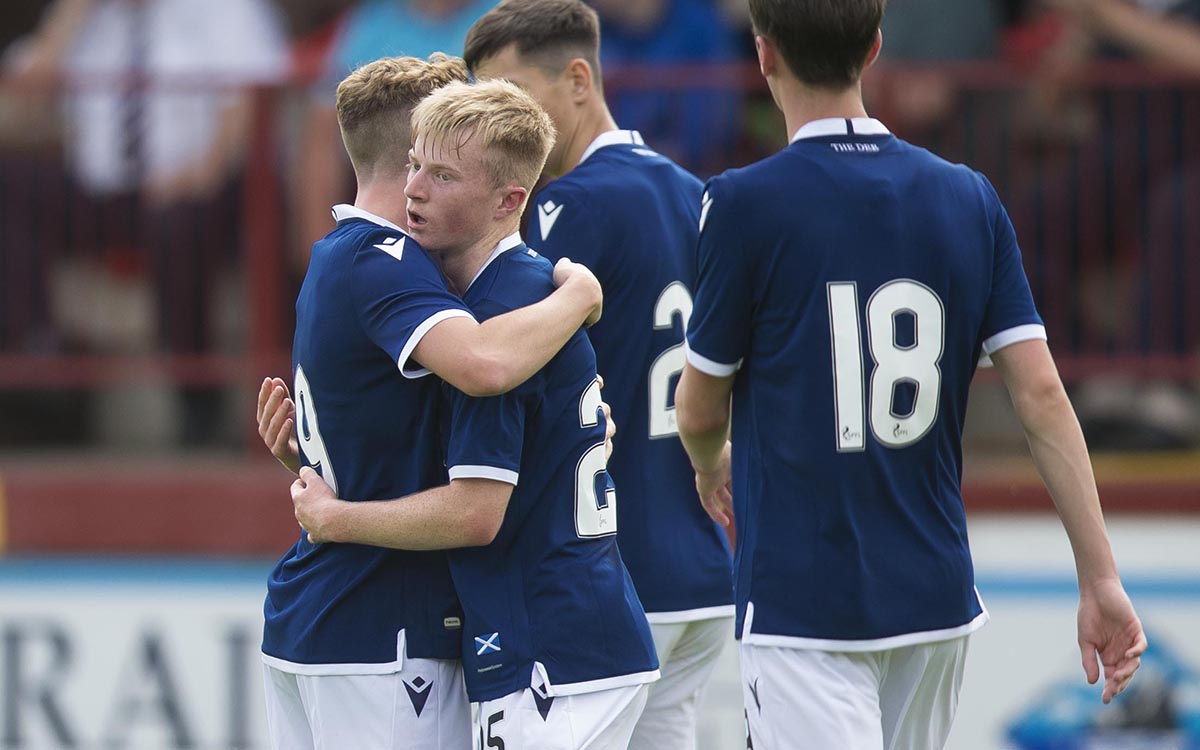 James McPake’s new look Dark Blues started their pre-season campaign with a comfortable 2-1 win in the Angus sunshine at Brechin. Declan McDaid and Lyall Cameron scored gems in each half, with Brechin City’s goal, a second half equaliser, coming from a trialist.

Brechin manager and Dee legend Barry Smith fielded a team packed with trialists. Dundee used only one trialist, James Murphy, a central midfielder. There were seven changes at half time, with no-one playing for the full 90 minutes.

The Dee started the match on the front foot, with the first half being played almost entirely in Brechin’s half. Josh Todd came close to opening the scoring after 90 seconds when the ball broke to him from a corner, but his shot was deflected just past the post.

Quick Dee passing was posing problems for Brechin and a fast move ended with Andrew Nelson’s shot being blocked for a corner.

Brechin struggled to get into Dundee’s penalty area, but midfielder Luke Watt was only inches off target with a dipping shot from 20 yards.

After that the game settled into a siege of the home goal. The trialist keeper impressed with fine saves from Nelson, Jordan McGhee and Declan McDaid. McGhee’s looping header looked on its way into the net but dropped a whisker the wrong side of the bar.

Jordan McGhee went even closer with a blistering free kick from 20 yards that the keeper managed to touch onto the inside of the post. He then had to save again, bravely at the feet of Josh Meekings as the Dee skipper tried to force the ball over the line.

Three minutes from the interval Brechin’s keeper was finally beaten by a goal as beautiful as the surroundings. Meekings swept a long pass out to the left where Jordan Marshall set up McDAID to cut inside and hit a screamer from the corner of the penalty area round the keeper and inside the angle of post and bar.

The seven half time substitutions didn’t interrupt the Dark Blues’ dominance and Dundee should have extended their lead from several promising attacks. The Brechin keeper yet again saved well at the feet of 18 year old Michael Cunningham before the Dark Blues gave away a soft goal from a loss of concentration at the back.

A simple corner was headed back across goal for the trialist striker, who had come on at half time, to nod home from close range. It was Brechin’s only attempt on target.

After that Dundee were straight back onto the attack and scored a winner that was as delightful as the first goal. 16 year old Lyall CAMERON took a pass from Callum Moore on the edge of the penalty area, turned and passed the ball round the keeper and inside the post. It was a goal that owed everything to precision rather than power.

Craig Curran was unlucky not to add to the Dee’s tally. His volley was cleared off the line, and then he was brought down from behind only a foot outside the penalty area after he had been sent clear. McGhee’s free kick struck a defender.

Max Anderson narrowly missed from 16 yards and Cunningham was foiled yet again by the keeper as a very young Dundee team saw out the match comfortably in control.

This was an enjoyable afternoon in the sun, and the traditional phrase “a good work out for the lads” is fitting. There were some good moments from all the new players and the youngsters did very well. But the highlights were the Dee’s two excellent goals from Declan McDaid and Lyall Cameron.