The Save That Won The League 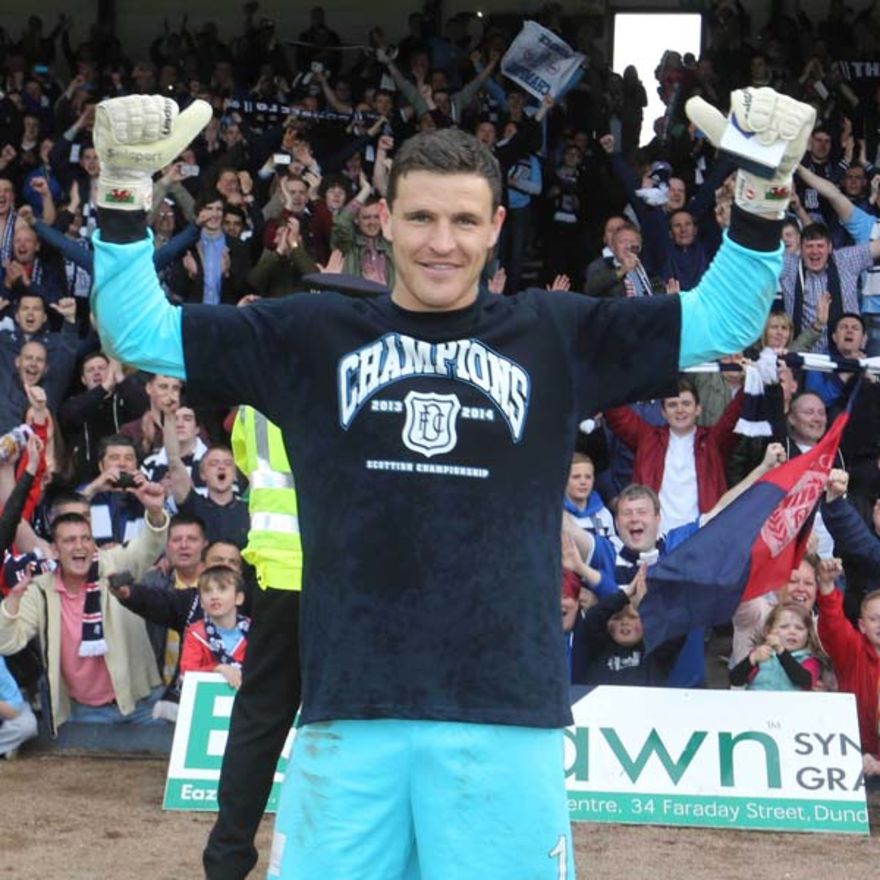 It’s Saturday 3rd May 2014; there are ninety minutes on the clock at Dens Park for Dundee’s final SPFL Championship match against Dumbarton and the Dark Blues are desperately hanging on to their precious 2-1 lead. Only a victory will now give The Dee the Scottish Championship title and promotion back to the top tier as rivals Hamilton Academical have incredibly clawed back the eight goal difference between the clubs and are leading Morton 10-2 at New Douglas Park.

The news of Hamilton’s incredulous scoreline had filtered through to the stands and the tension was rising as there was realisation that a Dumbarton equaliser would condemn Dundee to the play offs. Scott Linton then played a long ball forward from the half way line which found full back partner Paul McGinn 12 yards out on the stand side touchline and he whipped a cross into the Dundee box before Willie Dyer could close him down.

The cross was perfect, found substitute Bryan Prunty on the penalty spot and he rose like a salmon to out jump Gary Irvine and head the ball downwards towards the bottom left hand corner of the Dundee net.

It looked a goal all the way as the four stands packed with Dees held their breaths and feared the worst. The ball bounced down just two yards from goal and every single one of the 10,718 crowd expected the Dark Blue net to bristle with the ball but somehow, incredibly Dundee goalkeeper Kyle Letheren dived to his left, got the merest of fingertips to the ball and tipped it away for a corner.

Dundee hearts had skipped a beat and a collective gasp and sigh of relief rose around Dens. It was an incredible save; a moment of destiny that will propel the popular Welshman into Dark Blue folklore with the save that won the league. It was one of the greatest saves Dens Park had ever seen.

Seconds later Bobby Madden blew the full time whistle and Dens Park erupted with joy and the noise was almost loud enough to awake the extinct volcano in the Law. Dundee had beaten Dumbarton 2-1, were confirmed as the first ever Scottish Professional League Championship winners and were heading into the Premiership as champions as the champagne started to flow.

Every single Dundee player was a hero, a champion and not just the ones who played on Saturday but each one of the thirty players who have featured in the matchday squads this season. Kyle Letheren however had just perhaps elevated himself to legendary status with the moment he described himself as “the save of my life.”

He told the press afterwards, “That’s my best save ever. It’s the kind you dream of as a boy. To pull off a save like that in such an important game is superb. It was just a fingernail. I thought it was going to beat me when it took a nasty bounce but I got down to save it by stretching as long as I could.”

For fans of an older generation, it reminded them of Pat Liney’s 1962 League Championship vital penalty save in the penultimate game against St Mirren at Dens. If Liney hadn’t saved Jim Clunie’s late spot kick, it is likely Dundee would not have been crowned Champions of Scotland at Perth four days later and in keeping with goalkeeping union rules, Club President Pat said he was “immensely proud of Kyle” .

It was obvious on Saturday what winning the Championship meant to Letheren after he sprinted 80 yards to celebrate with the whole team in the dugout when Christian Nade scored Dundee’s opener. He told the website team on Saturday night that clean sheets mean everything to a keeper and having kept nineteen in the league this season, he set a new Dundee post-war record.

To cap off a wonderful weekend for Letheren, he was crowned DFC Player of the Year on Sunday night at the Supporters’ Association dinner in front of his team mates, fans and parents at the Invercarse Hotel. Having been awarded nine individual club trophies he won the Andrew De Vries Memorial Trophy on its 20th anniversary.

Kyle was delighted and proud to be voted Dundee player of the year by the fans and in an emotional acceptance speech said “it meant the world to him.”