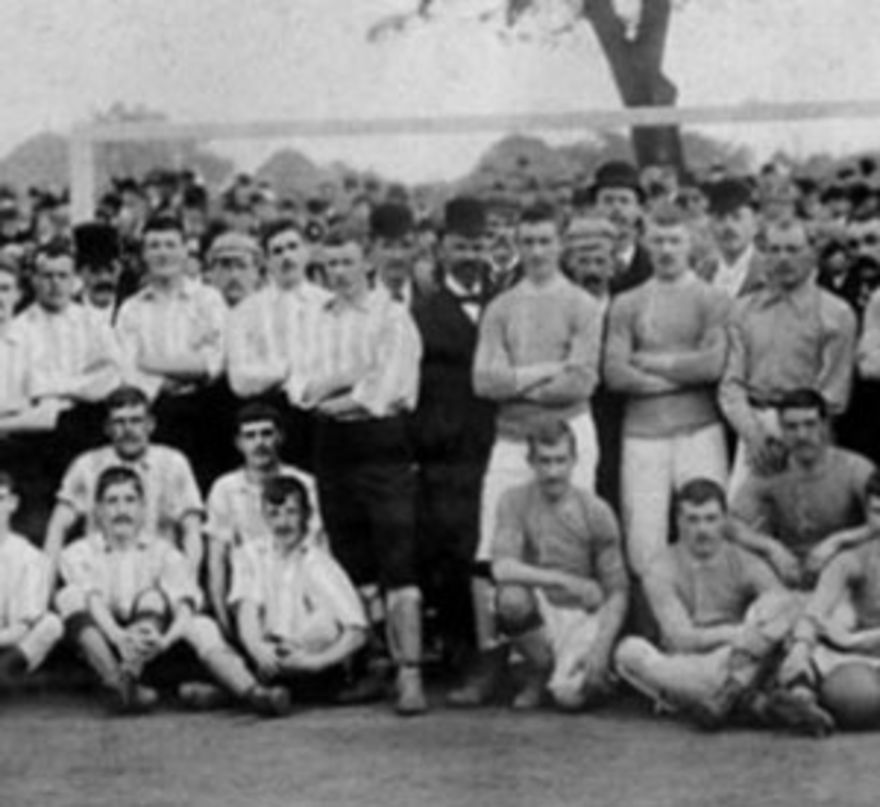 Today marks the 120th anniversary of Dundee Football Club’s first ever match against Rangers; a match that came after almost eight months of hard work, negotiation and compromise.

The genesis of Dundee Football Club can be found on January 7th 1893 when two city football clubs Our Boys and East End fought out a 4-4 draw on a snow-covered West Craigie Park. There was no love lost between these local rivals and ten minutes from time when crowd broke through the ropes and an East End official remonstrated with them and was pelted with snowballs for his trouble. He was forced to beat a hasty retreat but by then in the centre-circle there were, according to The Advertiser newspaper “a couple of young bloods exchanging blows.”

With the committee men safely in the dressing room, it was thought prudent to bring the game to an early conclusion but when sitting together hiding from the mob, it was suggested by an East End official that perhaps the two clubs should merge and look to apply to the three year old Scottish League. At the time, considering what had just happened and the bitter rivalry that existed between the two clubs, it seemed a ludicrous suggestion and it was laughed out of the dressing room and strenuously opposed by members of both clubs.

However both clubs were ambitious and wearying of the monotonous round of local fixtures and they yearned for the grander stage of national competition that only came occasionally through the Scottish Cup. The formation of the Scottish League in 1890 and the continual drain of the best Scottish players to England had already taken its toll and when professionalism was legalised in Scotland on May 2nd, the writing was on the wall for Dundee’s senior clubs.

On May 13th Mr Andrew Butlar, an official of Our Boys, who was also president of the Dundee Charity Football Association, made his views clear while presenting the Charity Shield Cup at the Albion Hotel in Tally Street. He highlighted the splintered football support within the city and strongly advocated that East End and Our Boys should amalgamate and apply for admission to the Scottish League.

This had the desired effect and it was finally agreed that East End and Our Boys would merge to form the Dundee Football and Athletic Club. On May 20th the two clubs met at Mathers Hotel in Whitehall Place and a formal application for membership was prepared for submission to the Scottish League AGM of June 12th which read as follows:

“We, the undersigned as representing the Our Boys and East End clubs of Dundee, hereby make application for admittance as an amalgamated club to be named the Dundee Football Club to membership of the Scottish Football League.

We beg to submit that this application on behalf of the two leading clubs of this district has the entire sympathy of the general public and that the committees and layers of both clubs are prepared to give the new club their support.

Should this application receive your favourable consideration, we would point out to you the advantages financially of the scheme. Matches between local clubs at threepence for admission have drawn over £100 at the gates and we feel sure with the admission raised to sixpence, and with interest attaching to a national competition such as the Scottish League, that this sum could be easily doubled.

One visit per annum from each of the League clubs would revive interest in the game here and would ensure large attendances.

Dundee, being the third largest centre of population in Scotland, viz 200,000 will, we think, commend itself favourably to you as a centre for a Scottish League club.

Dundee is now within easy reach of Edinburgh and Glasgow having connections with both the Caledonian and North British Railways. There is at the disposal of the new club a ground with a laying pitch of 120 yards long by 75 yards broad, quite level and well turfed. Accomodation is provided for 20,000 spectators.

We are certain that we can sustain the interest in the competition throughout the entire season, as we have a large field in the North of Scotland from which to engage players to compose our team.”

Hibernian, St Bernards and Cowlairs also applied for election and the bottom three clubs Renton, Abercorn and Clyde were applying for re-election. Dundee, Renton and St Bernards were successful and ten days later the former officials of East End and Our Boys reconvened to appoint office bearers for the newly-formed club.

It was expected that Dundee FC would play at Carolina Port but when the lease was surprisingly given to the city’s oldest surviving club Strathmore, the new club resolved to play at West Craigie Park, the former home of Our Boys. This required a considerable amount of renovation and the new Dundee FC committee was kept busy with fund raising and the assembly of a team worthy of Scottish League status.

Although Scottish international outside-left Sandy Keillor and goalkeeper Bill McKie were signed from Montrose, most of the players were drawn from the two amalgamated clubs.

The 1893/94 season was the first to be played in Scotland under the new professional status and for Dundee they were thrown right into the deep end with a first ever match against Rangers on August 12th – known as ‘The Glorious Twelfth’ for the start of the grouse shooting season.

And it was glorious in Dundee too with great excitement amongst the fans who made their way to the ground beside the modern day Baxter Park. Only the better off could afford a hansom cab and although many took the juggernaut steam trams – which often became stuck on the incline approaching Victoria Road – most made their way on foot.

120 years ago a working man could spend an enjoyable Saturday for very little money. A glass of beer cost a penny and a half with admission costing 6d (3d for boys) and a crowd of around 5000 turned up for the visit of the Light Blues

Dundee were wearing the blue and white vertical stripes of East End in their first ever match and the line ups for this historic game were;

Rangers had won the first two Scottish League championships and were runners-up the season before and after taking the game to their hosts soon found themselves 2-0 up thanks to a brace from centre-forward John Gray.

Dundee fought back quickly however and Sandy Gilligan got Dundee back into the match and at the same time had the honour of scoring Dundee’s first ever goal.

This sparked a revival in which Sandy Keillor and Jimmy Dundas put Dundee 3-2 ahead but before the end Rangers’ John Gray completed both his hat-trick and the scoring for the game to end 3-3.

“Thus has Dundee been successfully launched on its League career”, commented The Advertiser and the fledgling homesters could be well pleased with their 3-3 draw.

It didn’t get any easier the following week as having hosted the 1892/93 runners-up in their inaugural game, they now played the champions Celtic in their next. Celtic departed West Craigie Park with a 4-1 win (Plum Longair scoring his first ever Dundee goal) but the following week, in Dundee’s first ever away match, Dundee secured their first ever victory with a 3-2 win over Renton thanks to two goals from George Reid and one from Jimmy Dundas who would finish the season as top goal scorer.

By the end of the season Dundee finished a respectable 8th out of 10 and were re-elected for the following year and the 120 year history of this wonderful club was well underway.