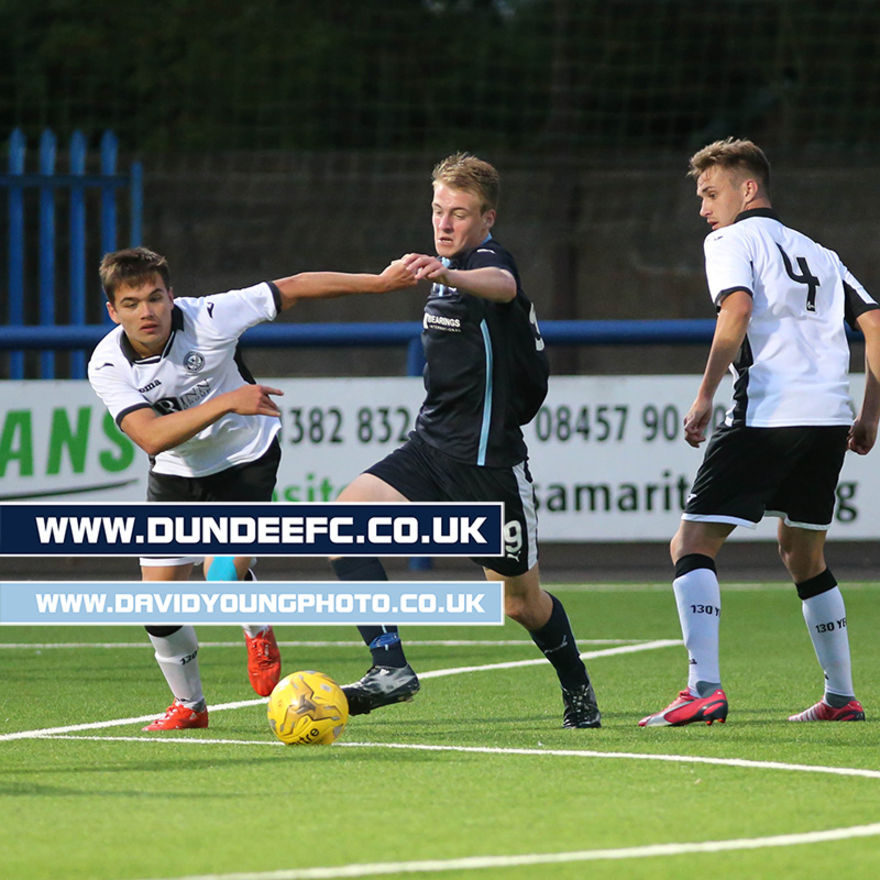 Dundee staged an exciting second half fightback to earn a draw against St Johnstone at Links Park, Montrose.

The unbeaten Saints fielded a strong line-up which included Simon Lappin, Liam Craig, Brad McKay and Chris Kane and it was Kane who opened the scoring in five minutes, taking advantage of a poor clearance to fire the ball in from close range.

The Perth striker was on hand again just two minutes later when he was first to the ball after Dens keeper Kyle Gourlay had parried a Connor McLaren shot.

Dylan Carreiro had a chance to reduce the deficit but his shot went across the face of the Perth goal and out for a goal kick.

It looked bleak for Eddie Johnson’s men at this point as Saints applied pressure on a frail looking Dens defence and Kane could have had his hat trick after only 10 minutes but his fierce shot was deflected for a corner kick.

Dundee were awarded a free kick on the edge of the Saints box and Josh Skelly just shot wide of the right hand post.

Saints were soon back on the attack and danger man Kane had a point blank effort well saved by Gourlay. Then Kane headed over the bar from a cross by Aaron Comrie.

The young Dark Blues were no doubt relieved to go in at half time without further damage being done but they were a different side after the break.
The visitors faded out of the game completely in the second half as Dundee took command.

A Skelly cross was just missed by Ryan Gemmell at the far post, but, on 52 minutes Skelly pulled a goal back. The striker took a pass from Jesse Curran and drilled the ball low into the corner of Ben McKenzie’s net.
Carreiro looked like equalising for the Dens men but was denied by the legs of McKenzie.

However, on 65 minutes the young Dark Blues got the goal they deserved. Good work by Carreiro set up Skelly and he made no mistake with a fine drive from 15 yards out.

Dundee introduced John Black for the injured Gemmell on 72 minutes and five minutes later had to bring on Taylor Berry for Carreiro who had suffered a nasty looking injury.

As the final whistle approached Ben Priest tried to break the deadlock with a shot that took a deflection and went for a corner.

Although this was a hard-won point, the young Dees might feel disappointed that they didn’t take all three after recovering from that disastrous start.