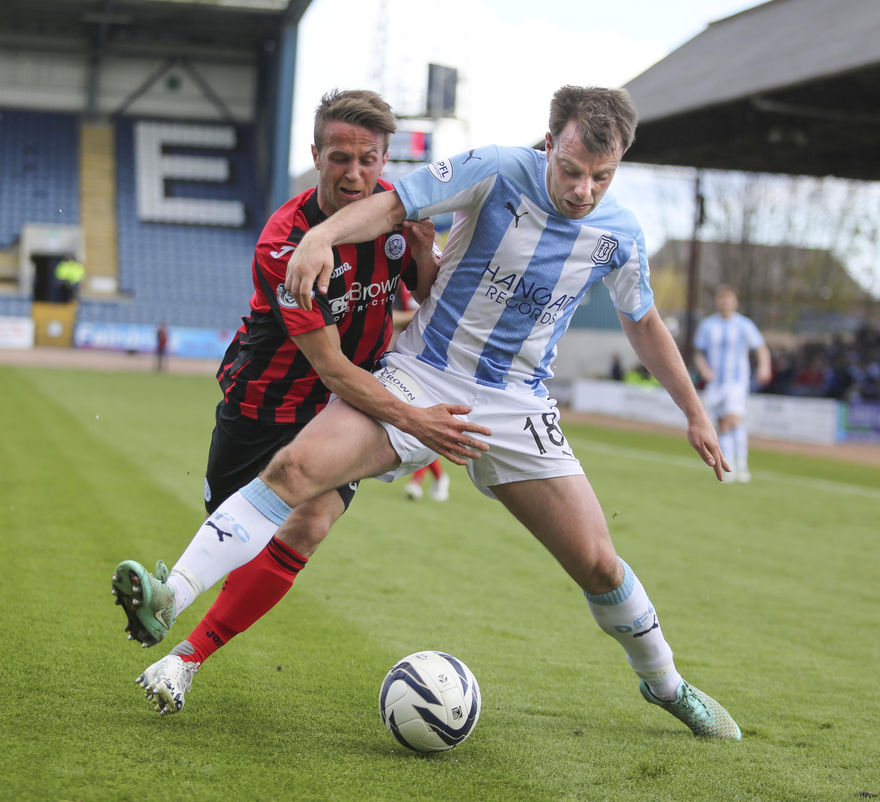 After the drama of the derby on Tuesday evening Dundee will hope to continue the buoyant mood, brought on by James McPake’s last kick of the match equaliser, when St Johnstone make the short trip from Perth to Dens on Saturday.

Paul Hartley hopes to have captain Kevin Thomson available after he came off in the derby with a knock, while Luka Tankulic made a return to training this week and should make the squad.

After opening day defeat in a thriller of a match at Tynecastle Saints have drawn their last two matches, both at McDiarmid Park against Inverness Caledonian Thistle and Ross County.

Former Preston and Exeter striker Graham Cummins has made a fast start to his Saints career, coming off the bench to score in their opening two matches before getting his first start and notching again in midweek. He was partnered up front on Tuesday by former Dee John Sutton, who joined in the summer from Motherwell. They could have Chris Millar available this weekend after injury. He returned to training earlier in the week.

You can watch Paul Hartley preview the match on DEETV now.

LAST TIME
Saints left happy when they last visited Dens in April, A goal from Danny Swanson and an own goal by Iain Davidson gave them a 2-0 win which went a long way towards helping them secure fourth place and a spot in Europe. Greg Stewart who’s been in fine form since the new season kicked off won’t have happy memories of that match, he was sent off for two bookable offences.

Murray Davidson
Tough tackling midfielder, Murray Davidson, has been at St Johnstone for 6 years after joining in 2009.
Began his career at Livingston, playing with Graham Dorrans, Leigh Griffiths and Robert Snodgrass before moving to St Johnstone with Dave McKay following the club’s demotion to the Scottish Third Division.
Capped once by Scotland in 2012, called up by Interim Manager Billy Stark and replaced Jordan Rhodes in the 89th Minute.
Suffered a long line of injuries in recent years and earlier this season was ruled out for 3 months but managed to return just 5 weeks after that injury.

Michael O’Halloran
Forward finished last season as the Club’s Top Scorer with 10 goals and already has 1 goal this Season against Alashkert in Europa League Qualifiers.
Born in Glasgow, he started with Celtic as a youth player before moving south to join Bolton Wanderers.
Spent time on loan at Sheffield United, Carlisle United and Tranmere Rovers before moving to St Johnstone in January 2014, and played in their Scottish Cup victory that year.
The speedy player can play as both a Striker and Winger, and will provide a tough test for any defender he comes up against.

SUPPORTER INFORMATION
Fans are reminded that the South Enclosure and Bobby Cox Stand’s are admission by ticket only.

Two adults and two children under 12 £46

With additional children under 12 at £ 2

Children under 16 in the family area are £10

Tickets are available at the ticket office, in person or by phone, or via the website at www.dundeefc.co.uk then click on “TICKETS” where you will be able not only to choose your seat but check on the view from seats in a particular area.

DEETV Overseas Virtual Season Ticket Holders will be able to watch the live action as part of their package. While other fans outside the UK can tune in for only £5.

A complete replay of the match (full 90 minutes) will be available to all DEETV Virtual Season Ticket Holders late on Saturday evening. For those who prefer to watch a shorter version then highlights will be available on Sunday.

We’ll also have live text updates here on the official site to keep you up to date direct from Dens.