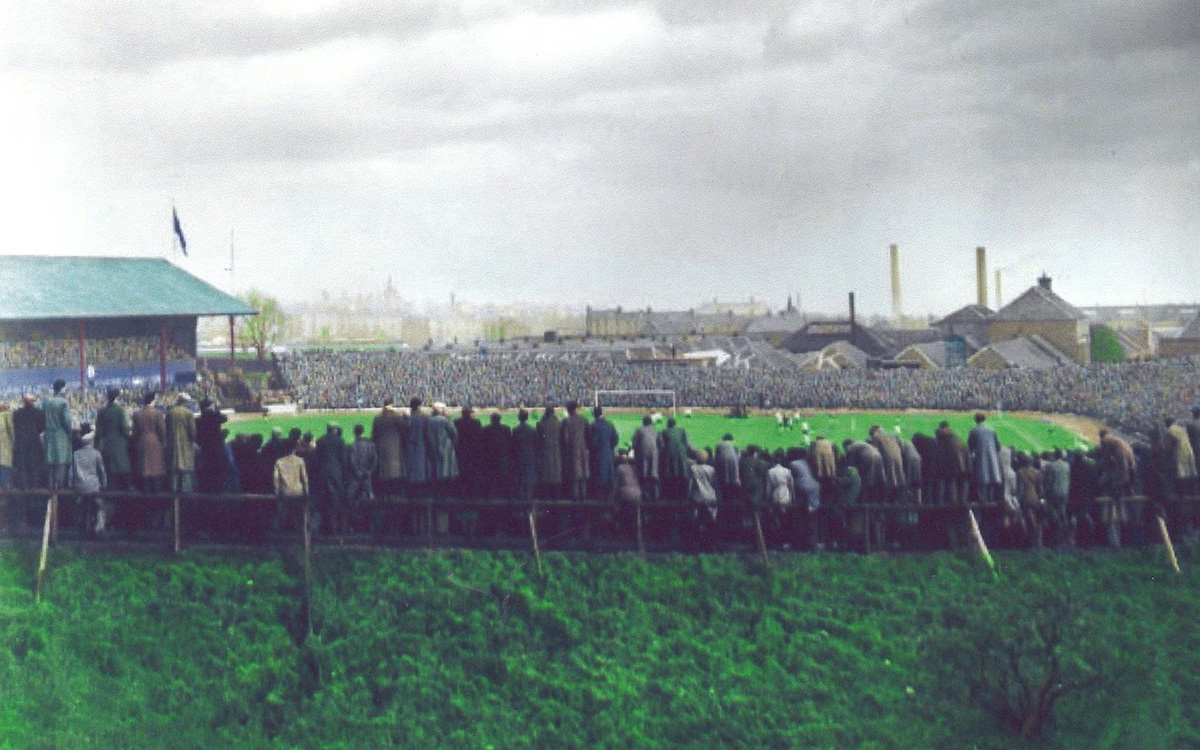 We are all missing the football at Dens Park and for a modern generation used to a capacity of 11,850 at the Kilmac Stadium, it in incredible to think that the record crowd in either ground on Sandeman Street is almost four times that in a second round Scottish Cup tie with Rangers in February 1953.

Season 1952/53 had already seen the Dark Blues lift the League Cup for the second season in a row and having also been runners-up in the Scottish Cup the year before, they were now looking to make it four major cup finals in a row.

After winning the League Cup against Kilmarnock in October however, Dundee won just two league games in seventeen matches. By the end of February, they lay next to the foot of the table but a 2-0 win over defending champions Hibernian on March 7th sparked a mini revival which saw George Anderson’s men eventually finish seventh, just one point behind fourth.

Rangers would win the Scottish League Championship with just forty-three points, finishing ahead of Hibs on goal average. It was the lowest points total to win the Championship since 1905 when there were only fourteen teams in the league and twenty-six games played and if Dundee hadn’t gone on such a bad run, they could have been in the mix. The Dark Blues finished with twenty-nine points and if they managed to transform their eleven draws into wins or win half of the games they lost, they could have unfurled their first league flag.

By Christmas it became obvious therefore that any further glory that season would have to come in the Scottish Cup, where Dundee would be aiming to reach another Hampden cup final.

Dundee have played in front of some remarkable crowds away from Dens and the highest ever attendance for a match involving The Dee was the 136,990 at the 1952 Scottish Cup Final against Motherwell

Two days after winning the League Cup The Evening Telegraph was already looking forward to the Scottish Cup which was still three months away as in its editorial it said, ‘The Dark Blues have a chance of pulling off a League Cup and Scottish Cup double. They failed at the last hurdle last season to accomplish this feat which has never been achieved before.’

The first round of the sixty-eighth Scottish Cup with all Scottish League teams entered was due to be played on January 24th 1953 but Dundee were fortunate enough to get a bye. With no game at the weekend, Dundee travelled down to Hull City in midweek to keep the players match fit and did their confidence no harm at all with a 4-1 win thanks to goals from Toner, Steel and Flavell (2).

It was good to have Steel back as he had missed the last two league games through injury. Steel wasn’t the only one who had been out in recent weeks as Gerry Follon, Ken Ziesing, Bobby Flavell and George Hill had also missed games in recent weeks which had no doubt contributed to the Dundee’s poor form.

When the second round draw was made on January 26th, the Dark Blues couldn’t have got it any tougher as they were drawn at home to league leaders Rangers. The Ibrox side were unbeaten in fourteen matches and as soon as the draw was made, Dundee announced the game would be all-ticket.

Such was the interest in the tie that the Dens Park record crowd was smashed for the third year in a row with a staggering 43,024 inside the fifty-four-year-old ground. It is a record that still stands today, having never been bettered since – not even in the fabulous European Cup run fifty years ago this year – and with the current capacity sitting at 11,856, it is a record that will never be broken.

Football attendances enjoyed a post-war boom and Dundee F.C. were no different. Dens Park’s top four record attendances all came in the eight years after the Second World War, while the highest attendance to watch Dundee in any match was the 136,990 who were at the 1952 Scottish Cup Final at Hampden. The Scottish Cup traditionally enjoyed bigger crowds that league matches and seven of Dens Park’s top ten crowds have been for Scottish Cup ties.

The match itself ended in disappointment as a 2-0 Rangers win ended Dundee’s chances of a double, double cup final appearance at the first hurdle.

Dundee played some neat football but with little penetration up front, they rarely looked like winning. It was two blunders within sixty seconds which gave Rangers their victory and it was a desperately disappointing way to be knocked out of the cup. The first came from Bill Brown who was back in goal for the second match in a row as he was home on leave for his National Service but he misjudged the ball to allow Hubbard to give the Light Blues the lead. The second blunder came from Gerry Follon almost from the restart when he allowed Gierson to nip in to make it 2-0 and there was no way back for the Dark Blues.

The £3,270 gate receipts brought a measure of consolation but with two months of the campaign remaining, Dundee’s season was effectively over.

Dens Park is Dundee’s third home in their 127 history and their first ground was West Craigie Park, to the north of Arbroath Road on a site now occupied by part of Baxter Park Terrace and Park Avenue. It was the ground of one of the Dark Blues’ two founding clubs Our Boys and Dundee played their first ever match there against Rangers on Saturday 12th August 1893 in front of a crowd of 5,000. West Craigie’s record crowd had been 6,000 for an Our Boys v Celtic Scottish Cup tie in November 1890 but that record was smashed in Dundee’s second match, also against Celtic, when 8,000 turned up to watch the new club.

The Dee didn’t stay long at West Craigie Park as the week after the end of their first ever league campaign they moved to Carolina Port in the city’s docks area which had been the home of Dundee’s other founding club East End.

A succession of end of season friendlies were arranged to hansel the new home against Newcastle United, Sunderland, Stoke City and Hibernian but the first Dundee F.C. game at Carolina Port was against a side called Dundonians which the Dark Blues won 6-0 in front of a crowd of 3,000.

The first competitive game at Carolina Port was the start of the 1894/95 season against Celtic with 9,000 in attendance and the Carolina Port record crowd was also set against Celtic for a league match in October 1896 in front of 17,500; 5,000 more than the official capacity!

Dundee have played in front of some remarkable crowds away from Dens and the highest ever attendance for a match involving The Dee was the 136,990 at the 1952 Scottish Cup Final against Motherwell; a Scottish record crowd for a match not involving either of the Old Firm. That same season 90,325 turned up for the League Cup Final between Dundee and Rangers which was the highest League Cup Final attendance to date. It was a crowd that would not be bettered in League Cup terms for twelve years until 105,907 would turn up to watch Rangers beat Morton in October 1963 and is today still the fourth biggest crowd in League Cup history, with the top two being for Old Firm Finals in 1965 and 1970.

The 1964 Scottish Cup Final against Rangers saw a remarkable 120,982 squeeze into Hampden while the year before 82,000 turned up at Ibrox for a Scottish Cup quarter-final between the clubs on April 3rd 1963. Three weeks later 78,000 were at the San Siro to watch Dundee play AC Milan in the European Champions’ Cup semi-final while the 60,000 at the Heysel Stadium for the Anderlecht – Dundee match in the quarter-final is the largest ever attendance for any match in Belgium. 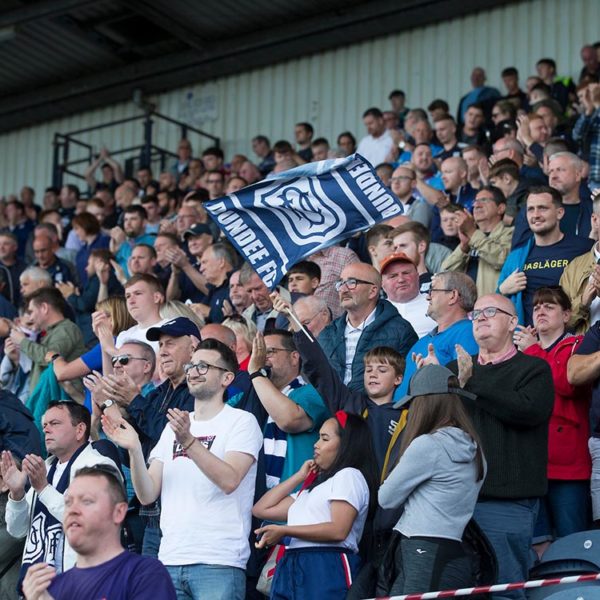 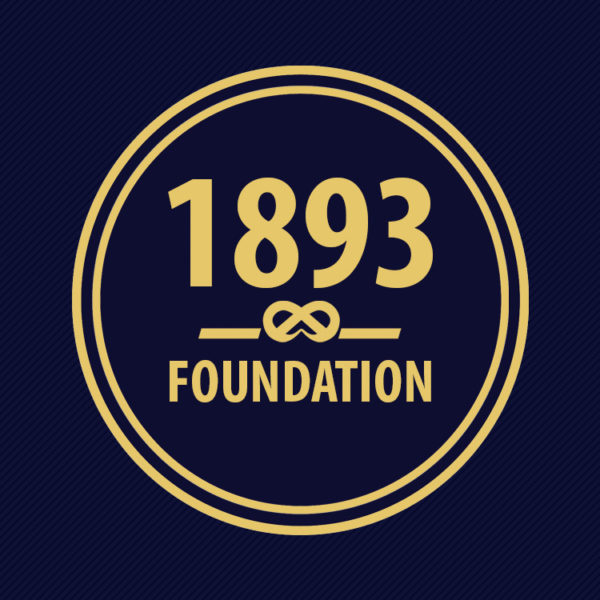