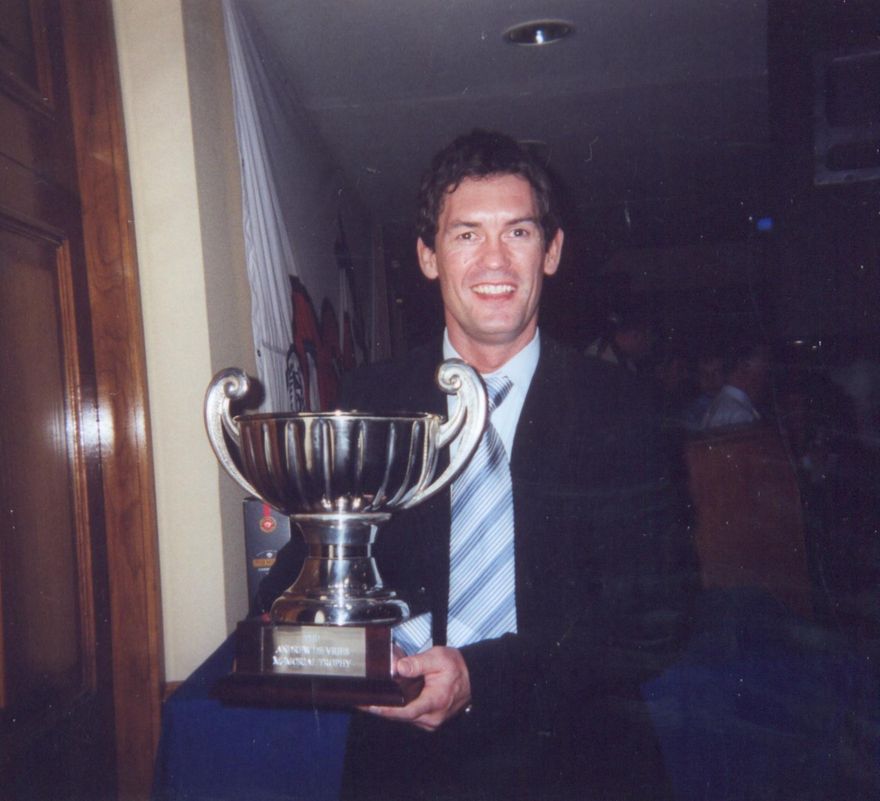 This weekend Dundee entertain Motherwell at Dens and so we take a look at the career of Willie Falconer who played for both The Steelmen and The Dee. Falconer was a popular player at Dens, winning the player of the year trophy in 2000. He not only finished as the Dark Blues’ top goal scorer that season but was also part of the side to record Dundee’s highest ever Premier League finish, had the privilege to partner Claudio Caniggia up front and had the handy knack of turning it on in the derby!

William Henry Falconer was born on April 5th 1966 in Aberdeen and started his professional career in 1982 with his home town team after a year in Junior football with Lewis United. Falconer joined Alex Ferguson’s Dons when they were at their peak and after six years of competing with their trophy winning stars for a starting place, he moved to Watford for £300, 000 after thirteen goals in seventy-seven league outings and a Skol Cup runners-up medal in his final season.

After two years at Parkhead, he joined Motherwell in 1996 and it was from The Steelmen that he moved to Dens in 1998 as part of the ‘Motherwell Four’ to join newly promoted Dundee. Alongside former Fir Park team mates Shaun McSkimming, Tommy Coyne and Eric Garcin, Willie lined up for The Dee on the inaugural day of the new Scottish Premier League and would make thirty-five appearances that season.

Competition for the striking roles was tough as Willie had to compete with Tommy Coyne, James Grady and Eddie Annand for a starting slot and he often played in a more withdrawn role, meaning he scored just four times in his debut season. Falconer’s first goal came in a crucial 1-0 home win over Dunfermline in October and his other three strikes all came in equally crucial wins against Hearts, Motherwell and The Pars again as Dundee looked to stay up in their first year back in the top tier.

By the end of the season however, they did that comfortably winning five of their last seven games after switching from a 4-4-2 to a 4-3-3 formation and their eventual fifth place finish equalled Dundee’s highest league placing since being Scottish Champions in 1962 and is The Dark Blues’ highest ever finish in either the Scottish Premier Division, Premier League or Premiership.

That season would also see Dundee finish above Dundee United for the first time in twenty-five years and this was secured in a memorable 2-0 win at Tannadice on May 1st. It was Falconer’s third derby of the season and his first was almost as memorable in September when The Dee came back from 2-0 down to snatch a draw in the dying seconds.

In the first game of 1999/2000, Falconer started his campaign with a goal against United on the opening day at Tannadice and ended it with a double over The Arabs at Dens in May and in between times he scored a further thirteen times to finish as top scorer with sixteen goals.

Willie started the season in fine form with ten goals in his first twelve games including a brilliantly headed double at Pittodrie against his old club Aberdeen. He beat his previous year’s appearances by one but his goal scoring record by twelve and like the previous campaign, many of them came in crucial games such as the injury time winner away to Hibs in March.

At the end of the season, Falconer won a number of the supporters’ clubs’ player of the year trophies as well as the Andrew De Vries Memorial Trophy for Dundee Player of the Year and their votes may well have been swayed by his magical end of season derby double which helped Dundee to a 3-0 victory; their biggest Dens derby win over their rivals since 1973.

In the summer it was all change when Ivano Bonetti was brought in to replace Jocky Scott as manager but the veteran 6ft 1in forward survived the Italian’s cull of many of Scott’s heroes. The signing of new strikers Fabian Caballero and Juan Sara however meant that Falconer would start the new season on the bench and in his third year he would make only nine starts and eight substitute appearances.

One of those starts was across the road at Tannadice in the second derby of the season in November and by then Dundee had made the extraordinary signing of Argentinean World Cup star, Claudio Caniggia. Falconer had been brought in at the expense of Juan Sara the previous week at home to Hibs and despite his hat-trick heroics in the first derby in September, Sara surprisingly stayed on the bench meaning Falconer would partner ‘El Pajaro’ up front.

It was a move that was to pay off for The Dee however as on thirty-eight minutes, Falconer cleverly played in Caniggia who sped through to pick his spot in the net to put Dundee ahead. Immediately the superstar ran to his strike partner and the image of Caniggia celebrating with Falconer is as synonymous with that famous afternoon as Nemsadze’s audacious chip in the second half.

In the next derby in January, Willie was this time was on the scoresheet himself alongside his illustrious partner but at the end of the season, now thirty-five years of age, he was given a free transfer and played out the end of his successful career with Clydebank, St Johnstone, Grimsby and Clyde.

Falconer’s three years at Dens were a memorable period for the club and for Willie it was the most prolific period of his career. He scored more goals for The Dee than for any other side and his record against United of three wins, one draw and four goals went a long way cementing his popularity as a Dark Blue destroyer.