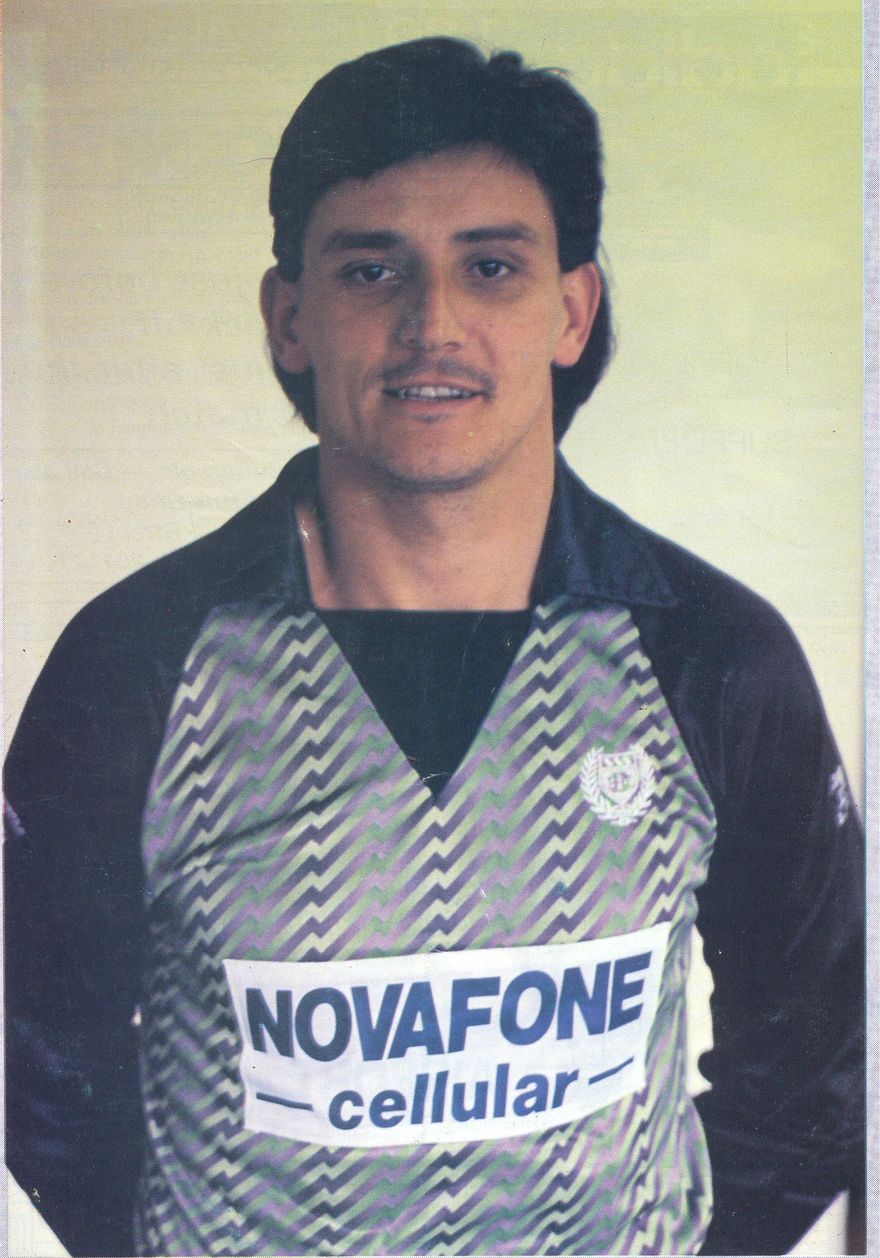 Today Dundee travel west to take on Dumbarton in the Scottish Cup so we take a look a player who played for both clubs, goalkeeper Tom Carson who won the Centenary Cup with The Dee and also managed The Sons, leading them to promotion from the Third Division.

For the most of the Eighties Dundee were lucky to have two very good goalkeepers on the books and for the majority of his eight years at Dens Tom Carson shared the number one duties with current goalkeeping coach Bobby Geddes. Carson made 92 appearances for Dundee which included the victorious Centenary Cup Final in 1990 but it was his performances in the Dundee derbies for which the Dark Blue support remember him most.

Born in Alexandria in West Dunbartonshire on March 26th 1959, Carson started his football career with local Junior club Vale of Leven before turning professional with Dumbarton in 1979.

After making over 150 appearances in five years for the Boghead side, Tam (as he was better known) was brought to Dens Park by manager Archie Knox a week into the 1984/85 season under freedom of contract. In these pre-Bosman days Dumbarton valued him at £100,000 while Dundee offered just £40,000 and The Dee were delighted when the tribunal set the fee at just £10,000 more than the Dark Blues had offered.

He was pitched straight into the side at the expense of Geddes who had played in the season opener at Pittodrie (a 3-2 defeat) and he made his debut at home to Hibernian on August 11th.

It was an inauspicious start with a 1-0 defeat to the Edinburgh side, followed a week later by a 2-1 defeat to Tam’s old club, newly promoted Dumbarton and by the time Dundee went across the road to Tannadice on September 8th, they were bottom of the Premier Division and still looking for their first league win of the season.

Knox had rebuilt the side during his first pre-season by bringing in the likes of John McCormack, Robert Connor, John Brown and Stuart Rafferty as well as Carson and suddenly the new boys clicked on the best stage possible.

Three times Dundee took the lead through McWilliams, McKinlay and Harris and three times United drew level but with 14 minutes remaining John Brown bulleted home a header past Billy Thomson for the winner. It was a remarkable 4-3 win for The Dee and a memorable derby debut for Tam in one of the most exciting and enthralling Dundee- Dundee United matches of all time.

Carson’s first season was symptomatic of how his Dark Blue career would pan out as he was regularly swapping places with Rab Geddes. Carson would make 23 appearances to Geddes’ 21 but in the next two seasons Geddes would be an ever present and Tam was forced to go out on loan to get some first team action. With only two outfield players allowed on the bench at that time, Carson had to go out on loan on seven times during his Dundee career to Hibs, Partick, Queen of the South, Ipswich, Dumbarton and Dunfermline twice.

Geddes’ consistent displays not only kept Carson out the side but also earned him Scotland under-21 cap as an over age player and after over two years out of the side Tam reluctantly handed in a transfer request to manager Jocky Scott who had taken over from Knox in the summer of ’86.

Carson was an extremely agile shot stopper whose height allowed him to come and pluck crosses out of the air and he displayed all these traits in a largely forgetful 0-0 draw; most noted for the dismissal of United’s Maurice Malpas after a clash with Vince Mennie in front of 19,355

Another 17,055 turned up at Tannadice three days later and this time the sides produced a thriller in the mud in which Carson produced a remarkable display.

A brilliantly taken double by Eamonn Bannon had left Dundee two down at the break and with Tosh McKinlay suffering a broken ankle after a shocking tackle from Kevin Gallacher, things looked bleak for Dundee.

However on for the popular left-back came substitute Graham Harvey and he scored twice to draw Dundee level. With just seven minutes remaining he put the ball in United’s net with an acrobatic effort but the linesman’s flag was incredulously up for offside to famously give the striker ‘the derby hat-trick that never was’.

While the second half belonged to Harvey, extra-time belonged to Thomas Carson who pulled off a string of stunning saves as the play raged from end-to-end. Each time United surged towards Dundee’s goal, Carson stood in their way and one save from a John Clark edge of the box thunderbolt in particular lives long in the memory as he finger-tipped the ball over the bar in the dying seconds.

It was a sensational match and the toss of a coin took the second replay to Dens thirteen days later but then by Bobby Geddes was back in the goal when Carson lost his place after a 6-1 mauling at relegation threatened Dunfermline.

Carson did come back in for the last six games of the season and continued to share the goalkeeping duties the following season. Geddes was the man chosen by manager Gordon Wallace to start the 1989/90 season but on October 28th he was drafted back into the side against whom? – You guessed it – Dundee United!

After a run of taking only five points from their opening ten games, Wallace rung the changes for the derby at Tannadice and Carson was again the hero in a 0-0 draw with a man of the match display. He kept his place, got an extended run in the team and would line up against United again three times in three weeks in late December and January.

A Gordon Chisholm goal earned Dundee a 1-1 draw at Dens on December 30th but it was Carson’s display in a derby that once again grabbed the headlines. Dundee then drew The Arabs in the Scottish Cup for the fourth season in the row and at Dens on January 20th, Carson kept a clean sheet in the 0-0 draw.

This time however it was United keeper Alan Main who made the headlines with three great saves. A goal-line clearance from former Dee Jim McInally also helped earn United a replay and three days later The Dee would rue missing those chances when United snuck through 1-0 in a closely contested game.

Sometimes of course football can be a cruel game and after finally becoming Dundee’s first choice keeper, Carson picked up an injury in March and missed the rest of the season which unfortunately saw Dundee relegated to the First Division.

In August 1990 Geddes transferred to Kilmarnock for £70,000 leaving Tam as Dundee’s first choice keeper for the promotion push but it was an ultimately disappointing end to the campaign when The Dee missed out on the title by two points and promotion by one.

In November Dundee did however win the B&Q Scottish League Centenary Cup Final with a 3-2 win over Ayr United at Fir Park and Tam played in all four matches en route to lifting the inaugural trophy.

In defending the trophy Dundee crashed out in the first round the following year to Ayr United who gained some revenge for that final defeat and that would turn out to be Carson’s last game for Dundee. Iain Munro came in to replace Gordon Wallace who had departed to Dunfermline and the new boss put his faith in youngster Paul Mathers and then new signing Jim Leighton who was brought in from Manchester United in February 1992.

Dundee would return to the Premier Division as second tier champions at the end of the season but Carson would depart on a free transfer after being released by Munro’s replacement Simon Stainrod and would join Raith Rovers. He would stay in Kirkcaldy for two years before returning to his first club Vale of Leven and was listed in 2015 as the goalkeeper in the Vale of Leven all-time dream team.

Carson finished his playing career with the Junior club but in October 2000 took over as manager of his first senior club Dumbarton and led them to promotion from the Scottish League Third Division in 2001/02. He left not long after due to a disagreement with the board over how much money was required to retain their new Second Division status and it turned out to be his last involvement in football.

Tam has however returned to Dens Park on a number of occasions to support club functions, particularly during the last administration and was amongst the former heroes in attendance at the celebration match against Partick at the end of the Dee-Fiant season.

Carson kept thirty clean sheets in his 92 appearances and thanks to his derby displays Tam, the original TC at Dens, is a cult hero of the Dundee support. He was occasionally brilliant and always resilient, and although he was in and out of the side a few times, he went about his business as if it was all part and parcel of the glorious uncertainty of a keeper’s lot.

Carson features in new Dundee FC eBook Dundee Goalkeeping Greats by club historian Kenny Ross which is available to download for £1.99 from Amazon, iTunes and iBooks.