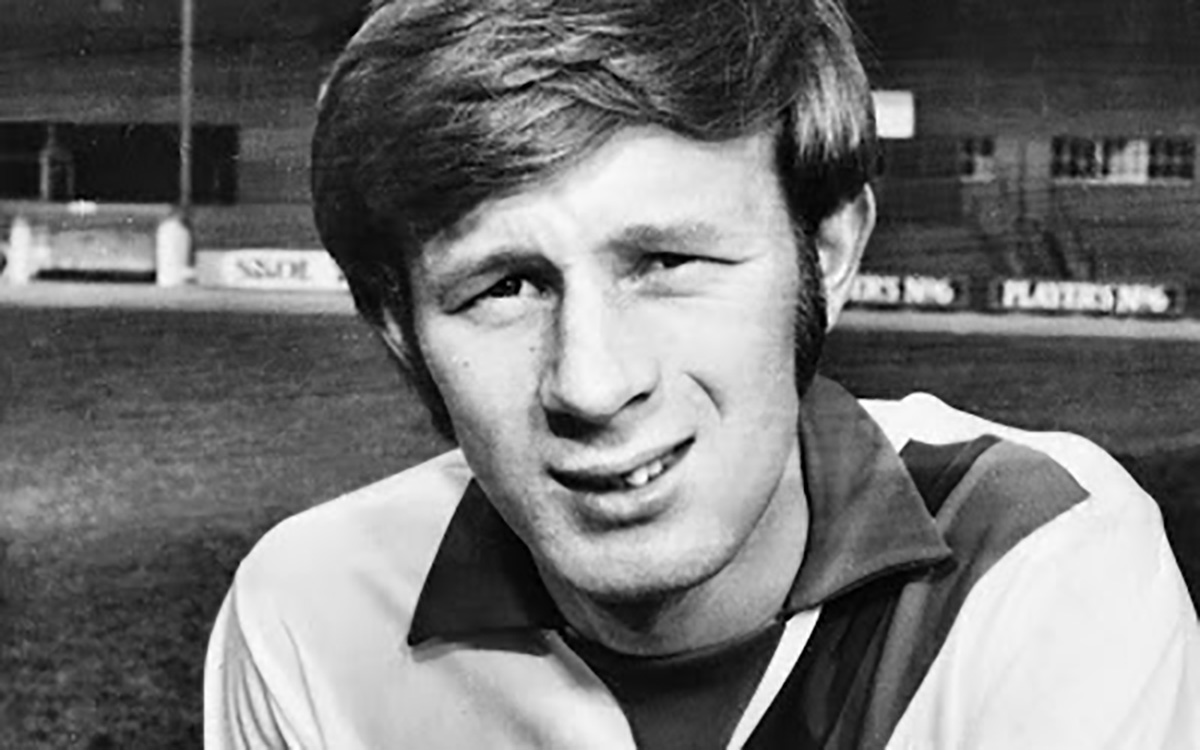 This weekend Dundee travel to Tynecastle to take on Hearts and so we  take a look at the popular Bobby Robinson who played for both Hearts and Dundee. Robinson was a classy midfielder in the excellent Dundee side of the early Seventies and was one of the real gentlemen of football. Nicknamed ‘Trigger’ by his team mates because of his turn of pace, he graced Dens Park for six years where he picked up a League Cup winners medal and was part of Scotland’s initial 1974 World Cup squad.

Born in Gorebridge, Midlothian on November 10th 1950, Robert Sharp Robinson stared his career in Junior football before signing for Falkirk in 1969 but was a surprise free transfer three years later when Dundee picked him up from ‘The Bairns’.

Bobby made a scoring debut for The Dee in the first game of the 1972/73 season in an 8-2 away win over East Stirlingshire in the League Cup and he would rarely miss a game that term.

That particular season was perhaps best known for the epic cup battles with Celtic and Bobby played in all five games against ‘The Bhoys’ who were in the middle of their nine-in-a-row league titles. In the League Cup quarter-final, Dundee beat ‘The Hoops’ 1-0 at Dens in the first leg but after losing 3-2 in the second leg at Parkhead, a reply would be required after extra time couldn’t separate the sides.

Played at neutral Hampden, Dundee’s hopes were high having also beaten Celtic 2-0 in the League at Dens but it wasn’t to be as Celtic progressed to the semis 4-1 before losing to Hibs in the Final.

Robinson and Dundee had a chance for revenge in the Scottish Cup when the sides met at Hampden in the semi-final but after drawing 0-0 in the first match, a replay was again required in which Celtic won 3-0 after extra-time.

Bobby did get revenge the following year however when Dundee won the League Cup Final 1-0 over Celtic in December 1973 and it was the highlight of Robinson’s time at Dens as the Dark Blues lifted their last major trophy to date.

That same season saw Dundee once again draw Celtic in the Scottish Cup semi-final and it was the Glasgow side’s turn for revenge as they emerged 1-0 victors before then lifting the trophy against Dundee’s deadly rivals United in the Final.

Robinson played fifty-three times in the League Cup winning season and included in those appearances was the third round Scottish Cup tie at Pittodrie when ‘Trigger’ scored Dundee’s second in a 2-0 win over Aberdeen. In the next round Bobby was instrumental in the Dark Blues’ stunning 3-0 win over Rangers at Ibrox and then in the quarter-final, wore the number eight shirt in both the first match against Hibs which finished 3-3 and then the replay at Dens in which Dundee won 3-0 in front of a terrific crowd of 30,888.

Bobby’s performances in these high profile matches alerted Scotland manager Willie Ormond of his ability and he was called up for a friendly against West Germany in Frankfurt before the 1974 World Cup in the same country. He earned the first of four caps when he came on as a substitute for Kenny Burns in the 2-1 loss and did enough to persuade Ormond to include him in the World Squad of forty for the Finals in the summer although he failed to make the final twenty-two which went to West Germany.

Bobby was also capped for the Under-23s against Wales in 1974 but made his first full start for Scotland in a friendly away to Sweden in April 1975. He won a further two caps before the end of the season against Northern Ireland at Hampden in the British Championships and came off the bench to replace Lou Macari in Romania in a Euro ’76 Qualifier in Bucharest in June.

Bobby played in two U.E.F.A. Cup campaigns for Dundee and in season 1974/75, the ginger-haired midfielder scored seven goals in forty-seven appearances. The following year however he played in half that total and when in 1976/77 he was being increasingly used as a substitute, it became clear to ‘Trigger’ that he would have to continue his career elsewhere. He did just that therefore in August 1977 when his former coach at Dens, Jim McLean took him across the road to Tannadice as part of a swap deal for Billy Williamson.

Two years later he left Dundee United for Hearts when his former international manager signed him for £20,000 and then in 1981, another former colleague, Gordon Wallace, who had played with Robinson on both sides of Tannadice Street, took him to Raith Rovers where he finished his playing career.

Bobby was part-time for most of his career, preferring to study for a degree at Dundee University and this stood him in good stead when he gave up professional football and became a school teacher in Kirriemuir while still playing for a string of Junior clubs.

Bobby Robinson scored twenty goals for The Dee and one of them, described by commentator Archie McPherson as a “peach of a goal”, featured weekly on the opening credits of BBC Scotland’s Sportscene show.

Sadly Bobby died aged just forty-six on Christmas Eve 1996 after a long battle with cancer. In a tribute to the midfield star his former team mate, manager and friend Gordon Wallace said that, “You could not have met a nicer person than Bobby”, while the Dundee fans that saw him play remember him as a great player who wore the Dark Blue of Dundee with distinction.