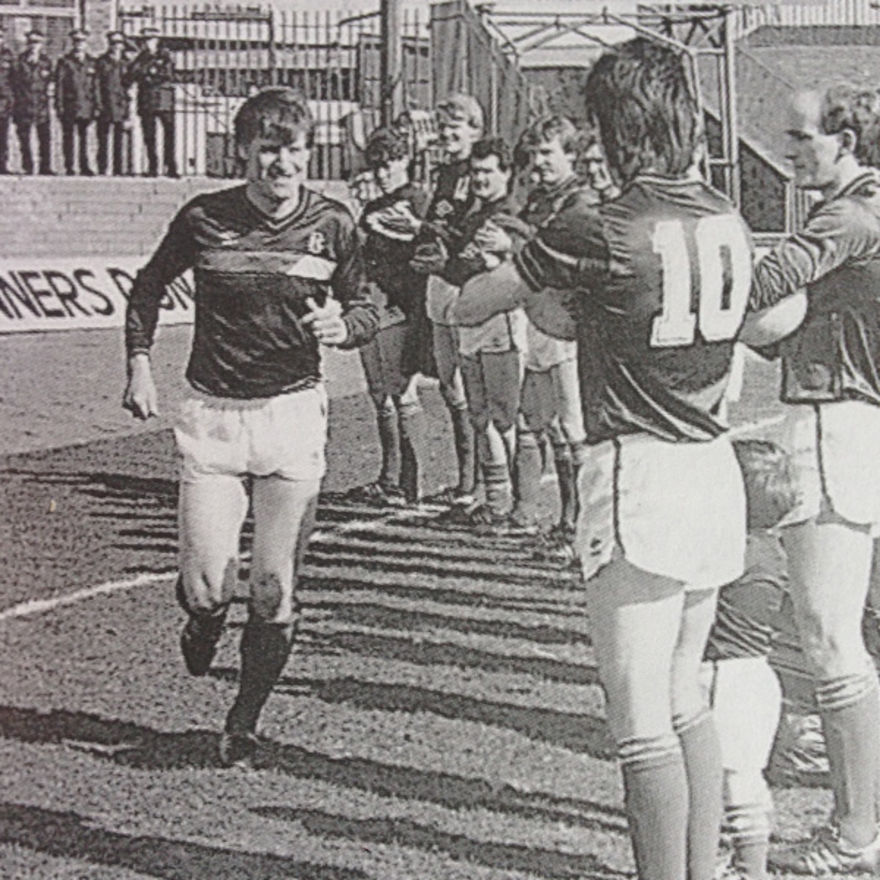 Dundee welcome Manchester City to Dens this afternoon but it’s not the first time the English side have travelled North to face The Dee.

Just over 28 years ago The Citizens faced Dundee in a testimonial for long serving defender Bobby Glennie.

Bobby spent 11 years as a player with the club and is still to this day seen in and around Dens. With 387 appearances he became a hero to the Dark Blue faithful through his spell at Dens in the late 70s through to the late 80s.

In 2013, he was inducted into the Dundee FC Hall of Fame.

His testimonial in 1986 saw the sides play out a 2-2 draw with Ray Stephen scoring Dundee’s first before Bobby himself smashed home a penalty to make it two all, at the second time of asking.

We spoke to Bobby this week about his day in the 80s and the return of City to Dens this weekend.

He told us it was a link from his Pittodrie days which made it happen, “When I was at Aberdeen Billy McNeill was the manager and at that time he was manager of Man City and the committee I had at the time decided to phone to see if they were available and they were so it was a good thing for Billy to do that for me.”

“Obviously they were a good pull. Barcelona would have been better! At that time they did play a lot of the first teamers. It was good. We got a penalty and the guys asked me to take it and I missed it, but the referee seen an infringement and I took it again. I just blootered it into the net so it ended up two each.”

Going on to say how good it is to have a club of City’s size coming to Dens, Bobby told us “It just shows how much they’ve progressed getting clubs of that status coming up to play Dundee. It can only benefit the club and give us a bigger name. It’s a big change from a year ago. It’s a whole new team and I think every supporter is looking forward to this season. Hopefully with the players that the manager has brought in and the backing he has had from the board it looks good for Dundee this season, I would think not just to stay up but I’d be looking for a top six. This early on in the season they’ve not played yet and the signs have been good from the start. The fans will be glad to see what the team looks like. I’m looking forward to the start of the new season. It must be the first time in twenty-odd years that the club seems to have a settled background so hopefully that continues.”

“I can’t remember the last time they’ve signed nearly a whole team basically, so this is now the manager’s team. He has let a lot go and kept some but he’ll be judged now because this is his team. Good luck to him. The guys that he has brought in will hopefully be good for him. I know Gerry (McCabe, assistant manager) and it will be nice meeting up with him.”

The players have been back for a few weeks now but today sees the first match of the pre-season schedule, Bobby went on to say, “They’ve worked now for about two or three weeks so they’ll be champing at the bit to get out and have a game. Man City won’t be a pushover. Just go and enjoy it. Work hard at it. You’re out to impress the manager who’s obviously seen what you can do so they just need to all work together. It’s a hard task getting a whole new team to go and play against a club the standard of Manchester City.”