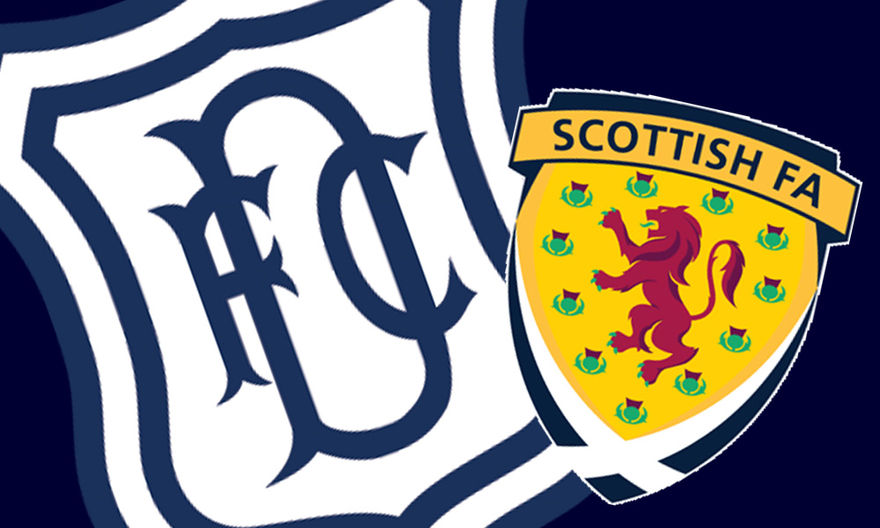 Tonight could see Scott Bain become the first Dundee player to represent Scotland for 13 years, in our international weekend build up we look back on the 36 players who have represented Scotland while with Dundee so far.

In recent years it has become a rarity for Dundee players to gain full caps. Gavin Rae and Lee Wilkie being the only two which have pulled on the famous Dark Blue of Scotland at top level in the past twenty two years. However throughout the other levels of international football a number of Dees’ have represented the nation. Craig Wighton most recently has been involved in under 17 and 19 levels. Kevin McDonald and Paul Dixon both featured for the under 21’s in recent years.

Under 21 level is where Dundee players have been most involved recently with Jim Hamilton, Derek Soutar, Iain Anderson, Neil McCann, Gavin Rae, Lee Wilkie, Kevin Bain, Andy Dow, Mark Fotheringham, Max Christie and Gordon McLeod all gaining caps at that level since 1990 as well as Jamie Langfield who while with Dundee gained two under 21 caps.

Craig Samson also was selected at international level when he made the Scotland ‘B’ squad although he didn’t make it onto the pitch. While another former goalkeeper Rab Douglas also made the ‘B’ squad in his first spell with club and did feature as a substitute against Wales in 1998. Rab went on the play a number of times for the full team after he left Dundee.

Dundee involvement in the Scotland full team didn’t take long to come about after the club were formed in 1893. March of 1894 saw defender Bill Longair, goalkeeper Francis Barrett and winger Sandy Keillor become the first Dees’ to represent their country during a 2-1 win over Ireland. That was to be Longair’s only cap as a Dundee player but Barrett would get a second a year later against Wales. A match that inside-left Willie Sawyer picked up his only cap. Keillor went on the earn three more.

1896 saw Dundee’s then home Carolina Port host it’s first international and Keillor became the first Dundee player to score for his country as Scotland ran out 4-0 winners against Wales. Right winger Bill Thomson also became the fifth Dundee man to play for his country during the game. Before the end of the 19th century one other player would pull on the Scotland shirt as a Dundee player. Bob Kelso playing against Ireland in 1898.

Peter Robertson and Jimmy Sharp picked up their first caps in 1902. Sharp would go onto play twice more including captaining Scotland in the first ever international at Dens. Before that game at Dens keeper Billy Muir picked up his one and only cap while at Dens against England. As well as Sharp, another Dundee player and future manager of Dundee Sandy MacFarlane was chosen to play in the first international at Dens, a reported 13,000 turned out to see Scotland and Wales battle out a 1-1 draw.

MacFarlane gained four more caps while at Dundee. One of which came in the second international to be held at Dens again against Wales but this time the score was to be a 2-1 victory for Scotland. Left back George Chaplin also picked up his only cap in that win at Dens, his shirt from the match is currently proudly displayed in the Dens Park boardroom. Jack Fraser made his only appearance in the blue of Scotland while at Dens in 1907 during a 3-0 victory over Northern Ireland at Celtic Park.

The 13th Dundee player to pick up a cap was to be John ‘Sailor’ Hunter in 1909, a year later he would go on to write his name in the Dundee history books scoring the clubs winner in their only Scottish Cup victory to date. A year after Dundee’s cup win another Dee got on the score sheet for Scotland. R.C Hamilton was a surprise call up for the match in Cardiff against Wales and went on to score in a 2-2 draw.

Tom Kelso followed in the footsteps of his uncle Bob when sixteen years after Bob had gained his only cap against Wales, Tom also gained his only cap while a player at Dens against Wales in 1914. The 1920’s saw three men represent Dundee for Scotland. David Thomson played his only game as a Dundee player for his country in February of 1920 in the first post war game. Winger Alec Troup picked up four caps between 1920 and 1922 it’s said the Dundee fans favourite would have picked up a lot more had it not been for Alan Morton of Rangers who played in the same position and was regarded as the finest winger in Britain at the time.

The third player who would represent in the 1920’s was Colin McNab who today is Dundee’s seventh most capped played for Scotland with six caps, his first came in 1928 against Ireland. Along with Jimmy Robertson, McNab was included in Scotland’s European tour in the early 30’s. Robertson was to only make two appearances against Italy and Austria. Jock Gilmour also picked a a Scotland cap in 1931. After McNab made his last Scotland appearance at Wembley it would be a long wait until a Dundee player was to turn out for Scotland again.

September 21st 1950 saw Dundee pay a Scottish record fee for a man who would go on to be arguably Dundee’s best ever player. Billy Steel was also an established Scotland international and after a long wait Dundee had a player back in the Scotland team. Steel played 13 times for his country while at Dens and gained unwanted honour of becoming the first Scotland player to be sent off during the European Tour game against Austria.

Steel is currently Dundee’s third highest capped Scotland internationalist the man who is one place above Steel gained his first cap in 1953. Doug Cowie went on to gain 20 full caps during his time at Dens. In 1955 he was joined on the international close season tour of Austria, Hungary and Yugoslavia by team mate Bill Brown but the goalkeeper was to be the only member of the 16 man squad not to feature and would have to wait until 1958 to gain his first full cap. Brown and Cowie were both chosen to represent Scotland at the World Cup Finals and while it spelled the end of Cowie’s international career it was to be the beginning of a seven year period of Brown as Scotland’s number 1.

As the club enjoyed a very successful period in the 60’s more and more players were involved in the international set up. The league winning season of 1961/62 saw Alex Hamilton, Ian Ure, Alan Gilzean, Andy Penman and Hugh Robertson all also feature on the international scene for Scotland. Hamilton went on to play 24 time as a Dundee player for his country and is the most capped Scottish player while at Dens. Ure played 8 times for Scotland while at with Dundee and Alan Gilzean picked up four caps including one against England at Hampden. A game in which he scored the only goal in a 1-0 Scotland victory.

Mid way through the 60’s Charlie Cooke’s fine form was rewarded and he gained his first cap against Wales at Hampden in a 4-1 win and his only other in a 3-0 defeat away to Italy. One more player was to be gain a cap before the 60’s was out. In 1969, George McLean appearing for the only time as a Dundee player against Holland.

1971 saw Jocky Scott capped as a Dundee player. Scott played twice for Scotland under Bobby Brown but when Brown was replaced by Tommy Docherty, Scott’s international career was effectively over. Docherty had released Jocky from Chelsea in 1964 and as expected didn’t include him again in the Scotland set up.

Scott was to be included in the 40-strong preliminary squad for the World Cup Finals in 1974 along with team mates Thomson Allan and Bobby Robinson who had both made their full debut against West Germany earlier that year. However, Allan who would play once more for Scotland while at Dens was the only Dundee player to be chosen for the 22 man squad.

The 80’s would see only one player from Dens being chosen for Scotland. Robert Connor was that man when he was included in the side that played Holland in 1986. It would be another long wait for a Dens man to represent Scotland and it was a former Dee who made it happen.

Craig Brown was in charge of the national team from 1993-2001 and with Gavin Rae turning in some impressive performances under Ivano Bonetti he was given his chance to impress on the international scene by Brown. He made his debut against Poland and became the first Dundee player to play for Scotland in fifteen years. Gavin played eight time for Scotland as a Dundee player before he moved onto Rangers and then Cardiff. He has featured for Scotland a total of 13 times now.

A year after Gavin had made his first Scotland appearance he was joined in the squad by another man from Dundee, Lee Wilkie was drafted into the squad for the tour of the Far East and made his debut against South Africa as a half time substitute. Wilkie played eleven times for Scotland during his time with Dundee, his finest moment coming when he was brought back into the squad after missing out on a number of friendlies for a crucial European Championship game at home to Iceland. With the score at 1-1 with twenty minutes remaining on the clock Wilkie rose above the defence to power home a header which meant Scotland went on to win 2-1.