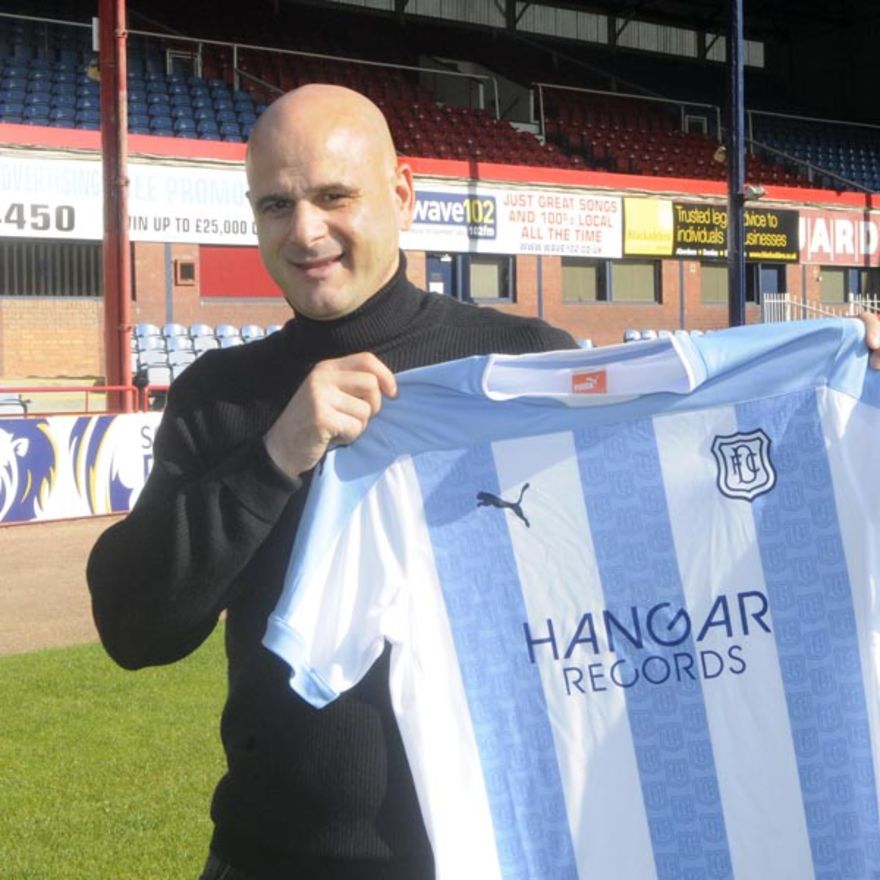 This week’s international break may mean no game for The Dee this Saturday but there is no lack of interest for Dark Blue fans with Kyle Letheren and Dylan Carreiro being called up for Wales and Canada respectively. Phil Roberts also featured for Republic of Ireland Under 21s on Thursday evening, coming on after 60 mins in a 4-1 defeat. While there is the unique situation of an international match taking place where both teams are managed by Dundee Legends.

Scotland take on Georgia in a Euro 2016 qualifier at Ibrox this Saturday and both teams are managed by former Dundee players; namely Gordon Strachan for Scotland and Temuri Ketsbaia for Georgia. Both are legendary players at Dens with Strachan the youngest captain in the Club’s history and Ketsbaia the 2002 Dundee FC Player of the Year and the international clash of Dark Blue heroes is an unprecedented event in the history of our club.

Strachan joined Dundee as a schoolboy from Edinburgh Thistle in 1971 and when he arrived at Dens there was little doubt about his ability as the wee-ginger haired midfielder was a ‘tanner ba’ player from the old school and was admired by all for his ball skills.

Despite some question marks over his slight frame, Gordon made his debut for Dundee as a substitute in the first game of the 1973/74 season in a Drybrough Cup tie at Dens against Raith Rovers but the teenager found it tough to break into the side that would win the League Cup that campaign and made just one further appearance from the bench a fortnight later.

But the fiery midfielder was fast earning a reputation as a brilliant player in the second team, twice winning the Scottish Reserve Player of the Year Award and being at Dens was not just a football education for the flame-haired youngster but it was also an education in life.

Progress was made the following season with a couple of first team starts and as one paper roared “Dundee find new Billy Bremner”, maturity off the pitch was slower in arriving. Caught in the act of quaffing Carlsberg after a Scotland youth match in Copenhagen, he was banned from international duty and another boozy binge with Jimmy Johnstone, the former Celtic winger, ended when they literally ran into their incandescent Dundee manager Tommy Gemmell in his hotel in Errol!

In August 1975, Strachan outshone Alan Ball in midfield in a pre-season friendly against Arsenal at Dens and the England World Cup winner made a point of shaking the hand of the eighteen year old when Gordon was substituted in the 2-1 win. He had now more than staked his claim for a regular berth in the new ten-team Premier Division.

Despite his contribution of six goals in thirty-one starts, Dundee were relegated along with St Johnstone at the end of the season and he made an even greater contribution the following year featuring in forty-two of Dundee’s forty-eight matches, scoring eight goals. It wasn’t enough to help take Dundee back up however as they finished third in the First Division behind St Mirren and surprise packets Clydebank.

To everyone it was obvious that the 5ft 6in midfielder was Dundee’s key man and at the start of the 1977/78 season, the Dens starlet was appointed club captain, becoming the youngest player in The Dee’s history to holds that honour. His sparkling form earned him a place on the bench for Scotland Under-21s against Switzerland but the skilful Strachan was becoming a target for some rough treatment, forcing manager Tommy Gemmell to complain that his youngster was “being kicked out of the First Division.”

On October 29th, Strachan starred in the 1-1 draw with Hearts at Dens but within days he was away to Aberdeen after the bank’s demanded money they were owed and his departure for the relatively small fee of £50,000 plus Jim Shirra would later be cause for bitter regret.

It was no surprise to anyone who saw him playing at Dens that he would go on to play in two World Cups, win fifty international caps, the European Cup Winners’ Cup and Super Cup, two Premier Division titles, three Scottish Cups, one English League title and an F.A. Cup. He would be named Scottish Football Writers’ Player of the Year in 1980 and the English P.F.A. Player of the Year twelve years later in a playing career that would last until he was forty and now everyone at Dens is proud to see one of their own in charge of the National side and bringing them out of their recent doldrums.

Strachan’s opposite number on Saturday, Georgian coach Temuri Ketsbaia joined Dundee in October 2001 and came with an impressive pedigree as Georgia’s leading goalscorer with 45 international caps already under his belt.

Ketsbaia joined fellow Georgians Giorgi Nemsadze and Zurab Zhizanishvili at Dens and quickly became a fans favourite. He made his debut against Hibs at Easter Road on October 27th and very soon Dundee’s balding number six became a major influence in the side with his drive and shooting power. As Dundee’s performances failed to live up to the promise of the previous season, the form of Ketsbaia was one of the few highlights for the demoralised Dark Blue fans and with a fine goal at Rugby Park and a blistering low shot against The Dons at Dens, it often seemed he was holding the side together.

At the end of the season manager Ivano Bonetti resigned and their was press speculation that a new management dream team of Jim Duffy and Ketsbaia would take over. Duffy did take over but Temuri was off, returning to his wife’s homeland of Cyprus where he signed for Anorthosis Famagusta.

Ketsbaia did go into management however but it was with the Cypriot side in Januray 2004 and after leading Famagusta to the Cypriot league title and into the Champions League group stages for the first time in their history, he was inducted into the Cyprus Football Hall of Fame.

Ketsbaia is now manager of the Georgian national side but was a star signing of the Bonetti era. His passion, drive and never say die attitude won him an army of fans at Dens who in April 2002 awarded him with the Andrew De Vries Player of the Year trophy. He was a worthy successor to Claudio Caniggia who had won it the season before and while Dundee fans had worn blond wigs in honour of the Argentinean, there were soon plenty of Dundonian men who claimed their lack of hair wasn’t genetic but was in fact in deference to Temuri Ketsbaia, the balding genius with the ferocious shot and the heart of a lion who sadly graced the dark blue jersey for all too short a time.

Temuri loved his time at Dens and took the opportunity of being in Scotland with the Georgian national team to take time out from training and head east to Dundee and visit Dens Park. The Club were delighted to welcome him and wish him every success in the future – but after Saturday of course.

Sky Sports were also on hand to talk to Temuri about a number of things including his time at Dens. They have been showing a number of clips already this week of their interview but will have a full piece in the pre-match build up ahead of the match this weekend.

Perhaps Scotland can win the group with Georgia second meaning they both qualify for France so that Euro 2016 will have two ex-Dundee players leading their teams out in the Finals.