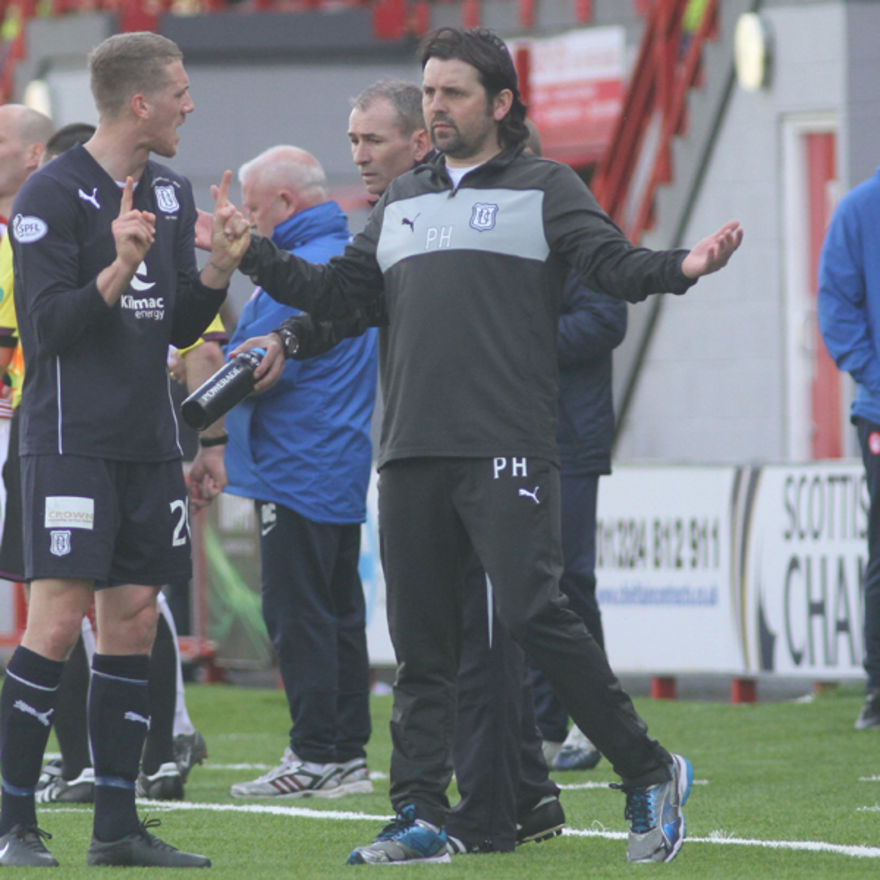 “I thought it was a frantic game at times and I thought it was a game that had so much at stake. Both teams were trying to have a go.” Paul Hartley said before praising how his team went about their business after coming away from New Douglas Park with a 1-1 draw against Hamilton. “We were delighted, we thought the game plan worked well for us today in terms of how we set up. We just changed the system a little bit. I was pleased the way we defended, I thought we were resolute. It didn’t look like we were going to give a goal away. We got our nose in front with a good finish from Boyle. Probably a point I would say is a fair result.”

“It was a key moment for us” he said of Iain Davidson being forced off due to injury. “I thought he was outstanding in the period he was on. He played on when he shouldn’t have, he took a real knock in the first half. He won his headers and he kept Scotland quiet and that changed the way that we played, it disrupted the flow of the game for us. He just turned and I think he caught his knee so we’ll need to assess him and see how he is.”

The manager talked about the season going to the wire with a Falkirk hanging in there. “Well there’s the 3 teams in it, it’s not just about us. Falkirk are in it, they have clawed their way back right into it. It’s an exciting end to the season, thats for sure. That’s what we want in Scottish football. We’ve got 4 games left and all we can do is do our best, give it our best shot and we hope to try and win every game. That’s what we’ll try and do next week.”

“I’ll look at it on the DVD” he said of the question over Hamilton’s equaliser refusing to be drawn into debate over a possible foul. “I don’t want to comment on it. We’ll have a look at it over the weekend and see if there was interference there. We were disappointed the cross come in in the first place. It’s one of the things we base ourselves on especially fullbacks, to stop crosses coming in. There was too many crosses coming in for my liking today. Overall I’m pleased with the players, I thought their effort was tremendous.”

Paul talked about Martin Boyle and how the young player has flourished during his time at the club. “He finished it well (his goal), he was composed, he’s had a lot of chances since we took over. At times he just rushed things and he’s been a bit erratic but we’ve been working on him in terms of his coolness and trying to pass it into the net instead of blasting it in. We’ve worked a lot with him in the last 8 or 9 weeks. He’s always a threat, he looks to get in behind people and his pace will cause them problems. He can be pleased with his goal, that’s good for him, it’ll give him lots of confidence.”

Finally the manager talked about the fans, with a vocal 2100 traveling to show their support even when the opponents equalised and how important they are in the run-in. “They were brilliant. We’re a big club, we’re definitely a big club. We took over 2000 fans down today and they backed the team all the way. The players are grateful for that but we’ll need them for the next 4 games, that’s for sure. We’ve got 4 massive games coming up.”