Dundee Football Club are delighted to announce the appointment of Paul Hartley as the new Manager of the Club.

Paul joins us with immediate effect on a deal to run to the end of Season 2015/16.

Director of Football Operations John Nelms said “I’m delighted that we have managed to attract one of Scotland’s brightest up and coming Manager’s to Dens Park and his dynamism and forward thinking fits perfectly into our plans for the club”.

Chairman Bill Colvin also expressed his warmest welcome top Paul. “It is a great tribute to the work we are doing at Dens Park that one of the most sought after young Managers in Scotland has pledged his immediate future to us and we look forward to see him apply his talents to our squad”.

Chief Executive Officer Scot Gardiner was happy and relieved to get the deal sealed in time for Paul to take over advance of Saturday’s crunch game against Hamilton. Scot said “I have been working round the clock since I first met with Paul in Edinburgh on Monday night. With John Nelms being in Texas most of our e-mails and phone calls were flying back and forth at 3am in the morning but knowing Paul as I do, I had the feeling all along that we would have the right man to take us into the run in to the end of the season”.

Paul has been appointed manager of Dundee FC and he comes to the club with a successful past in both playing and managing in this country.

As a player, Paul won all the top prizes in the Scottish game as well as representing his country on twenty five occasions. In management, he already has two promotions to his name after only two and a half years in the hot seat.

A midfield player, Paul started his career with Hamilton Accies where he earned a move South to Millwall for a six figure sum in 1996. A season later he returned North, again for six figures and joined Raith Rovers. While at Starks Park he featured against Dundee and actually scored on the day Dundee last clinched the 1st Division title – opening the scoring before Eddie Annand levelled for The Dee.

He moved to Edinburgh in 1998 and helped Hibernian return to the top flight at the first time of asking in his first season with the club. In his second season with the Easter Road club he spent time on loan with Greenock Morton before joining St. Johnstone in 2000. Three years in Perth saw him impress and earn a move back to the Capital, this time on the maroon side when he joined Hearts.

It was with Hearts he made his break through to the Scotland full team set up, his debut coming away to Italy in the San Siro.

As well as international recognition, Paul also enjoyed success at club level. In 2006, he put in what was probably his most memorable performance of his career, scoring a hat trick against his former club and local rivals Hibs in a Scottish Cup Semi Final. Hearts would go on to lift the trophy after a penalty shootout against Gretna.

The following summer, Paul moved to Celtic where he got experience playing at the top level in the Uefa Champions League, and added a few more medals to his collection. A league and Scottish Cup double in his first year at Parkhead was followed up by a second league win in 2007/08. The next season, he helped Celtic to another cup win and completed his set as he won the League Cup for the first time, with a 2-0 win over Rangers.

Paul returned South at the end of his spell with Celtic, joining Bristol City for a season before returning North to join Aberdeen where he would end his playing career.

He was made Club captain on the day he signed at Pittodrie and scored a hat trick on his league debut for the club. As the season came to an end, Paul announced he would retire at the end of the season.

In the summer, he moved into management when he was appointed boss of 3rd Division Alloa Athletic. He rebuilt the squad over the pre-season period and in April 2012 was celebrating his first success as a boss when they sealed the title. Back to back promotions is a tough task but one that Paul achieved as he led Alloa to a Play off victory in 2013. His Alloa side beat Dunfermline in the final with a 3-1 aggregate win.

His success continued in the SPFL Championship this season as he led his side to sit as high as 4th in the table as recently as December of 2013. He left his post as boss of Alloa in January and has been appointed boss of Dundee less than a month later. 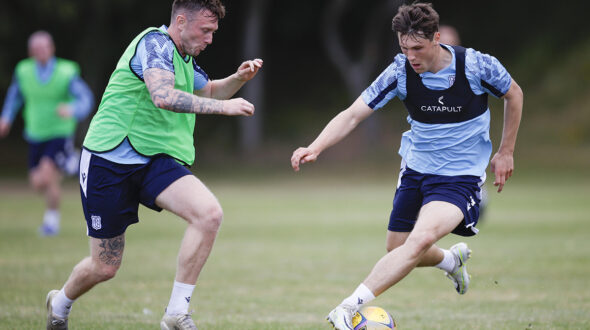