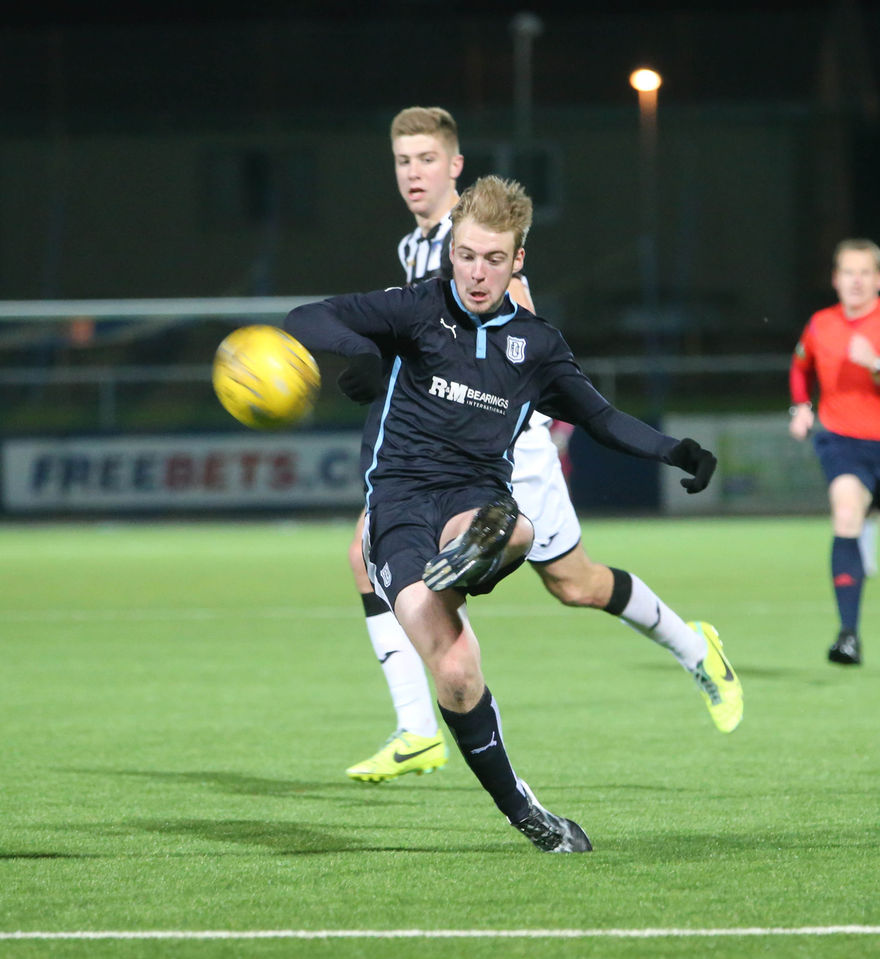 After a gruelling 120 minutes in their Scottish Youth Cup tie at Tannadice Dundee’s youngsters were in action again only 48 hours later, this time in the league against Inverness Caley Thistle at Links Park, Montrose.

The visitors had a number of experienced players in their ranks and manager Eddie Johnson could only freshen up his side with the addition of Cammy Kerr and Dylan Carreiro, playing his last game in Dark Blue.

The Highlanders started strongly and Danny Lopez tested Kyle Gourlay after only five minutes. It was no real surprise when they took the lead after 14. A mazy run by Ali Sutherland took him into the Dundee penalty area where he squared to Jordon Roberts who scored with a low drive.

With Lopez, Roberts and Toby Sho-Silva a dangerous trio up front it looked only a matter of time before Inverness increased their lead and Dens keeper Kyle Gourlay did well to beat out a Lopez effort.

Only an excellently timed tackle by Kerr Waddell on Sho-Silva prevented the striker getting in a shot as the visitors pressed.

It was 25 minutes before Dundee could threaten the Caley goal. A good move down the left involving Greg Warwick and Ryan Gemmell saw the ball delivered into the Caley box for the waiting Ben Priest but the ball was nipped off the centre half’s toes before he could shoot.

As the away side broke upfield it took a great tackle from Warwick, racing from right back to left, to avert the danger.

Into the second half and it looked as if Sunday’s effort had taken too much out of the Dens youngsters as Caley Thistle continued to dominate.
Sutherland blasted a shot straight at Warwick and Lopez crashed a 20-yarder off the bar with Gourlay beaten.

Gourlay then brought off a fine save from Sho-Silva to keep his team in the game.

Dundee introduced two 15-year-olds in Matthew Henvey and Taylor Berry for the hard-working Jesse Curran and Kyle Clark and just minutes later were on level terms.

Josh Skelly took a Carreiro pass inside the box and stabbed the ball home from 12 yards.

Gourlay then brought off a fine save from Roberts but the Dundee youngsters had found their second wind and pushed hard for the winner.

Calvin Colquhoun had been immense in midfield and he won a tackle just outside the box before driving forward and firing in a shot that was blocked by a defender.

A Gemmell shot was diverted for a corner and Skelly came close with a curling effort that went just wide.

In the dying seconds, Kerr won a header and fed Skelly whose cross was headed onto the bar by Priest.

So, just a point for the Dark Blues, but it says much for their fitness levels that they were the stronger team as time went on and they were unlucky not to snatch victory at the death.