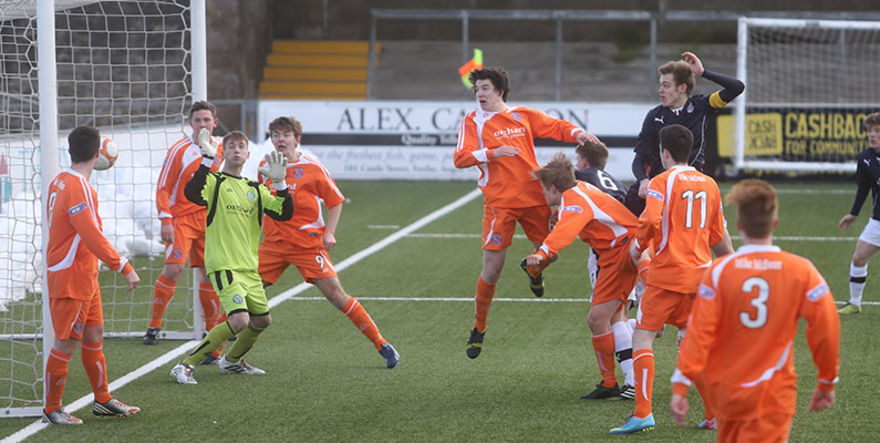 Dundee gained some revenge for a 7-1 thrashing at the hands of Forfar when they last visited Station Park in December.

Though they conceded five, this time they managed to put six past the home keeper and claim their first points in their Under 19 League Cup section.

The visitors opened the scoring in the first minute when Calvin Colquhoun headed in Lee Cameron’s corner kick.

However, it took the home side only seven minutes to equalise. Hay chased a long ball and Dark Blues keeper Calum Brodie raced out of his box to challenge. Hay pushed the ball past Brodie and Greg Warwick raced in to complete the clearance.

However, the referee blew for a foul by Brodie and booked him. From the free kick Hay gave the keeper no chance with a shot into the bottom right corner.

Max Avolio then set up Calum McHardy for a shot that went well wide of the target.

Back at the other end Brodie had to look lively to deal with a shot from the dangerous Hay.

A Colquhoun cross into the box saw Connor Macleod beat Loons keeper Gary Grant to the ball but full back Liam Keiller was on hand to clear.

Warwick picked up an injury and had to be replaced by debutant Robbie Casey on 27 minutes and three minutes later Dundee went in front again.

From a McHardy corner on the right Neave exposed Forfar’s frailties at set pieces by heading the ball home and Avolio increased the lead five minutes later, curling in a fine cross by Casey.

Two minutes from half time former Dundee player Craig Smith should have reduced the deficit, but Smudger somehow managed to miss the target from five yards out with the keeper stranded.

Three minutes into the second half Forfar got one back. A fine move involving Hay, Paul McLellan and Cammy Clark ended with Clark finding the net.

Brodie then brought off a great save from a speculative effort from Forfar’s James Yates, but from the corner Clark headed the home side level.

Dundee re-established their two-goal lead within five minutes with a brace from Connor Macleod, the first a header from a McHardy corner and the second a well hit effort from 15 yards after a Casey shot had been blocked.

However, that man Clark hit back with another two for the Loons to bring his tally to four and make the score 5-5 after 77 minutes.

Just prior to that last goal, Forfar’s McLellan was lucky not to see his second yellow of the game when he clashed with Colquhoun and the player was subbed before he could get into any more trouble.

With 10 minutes remaining Cameron was brought down in the box and Grant was booked. The striker took the penalty himself and gave the keeper no chance.

Coach Gavin Burns then threw on Cammy Black for Casey. Namesake John Black created the final chance of the match, his cross from the right finding the head of Cameron but Grant brought off a fine save.

The game became a bit bad-tempered in the closing stages and Forfar’s Craig Smith and Dundee’s Cameron and Thomas Carberry were all booked.