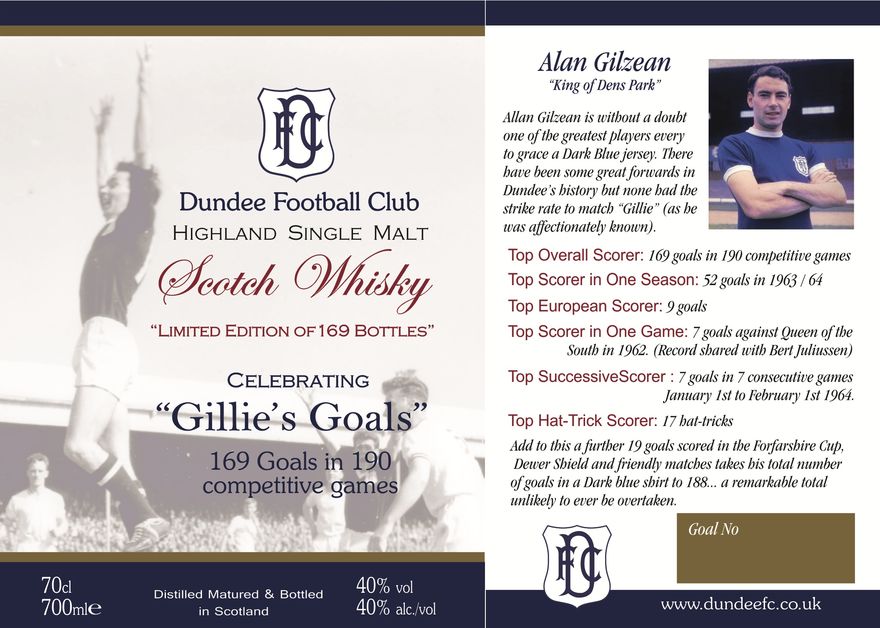 Dundee FC are delighted to announce that the 70cl bottles of Gillie’s Goals Highland Single Malt are now on sale exclusively from our official partner The Fort Hotel, Broughty Ferry.

The much anticipated and talked about limited edition bottles – only 169 have been produced to commemorate each of Alan Gilzean’s goals in Dark Blue – are priced at £90 and will be sold on a first come first serve basis. They will be available to buy from 11am – 10pm daily.

Each bottle is numbered and comes with a certificate which describes that goal scored, where, and when, making it entirely unique. Bottle number one was presented to Alan himself on the occasion of being inducted in to the Tottenham Hotspur Hall of Fame in December 2013 and bottle 169 was presented to Spurs to symbolise the last goal Gillie scored before moving to White Hart Lane. It now sits proudly on display in the Tottenham Hotspur Museum.

The Club expects this Whisky to be just as popular as the 120th Anniversary Tullibardine Single Malt – which sold out in a matter of weeks – and therefore encourage all collectors or those who enjoy who national drink to make their purchase as soon as possible to avoid disappointment.

Please note that payment can only be made in person at The Fort Hotel, Broughty Ferry. We regret to announce that we cannot ship orders at this time.